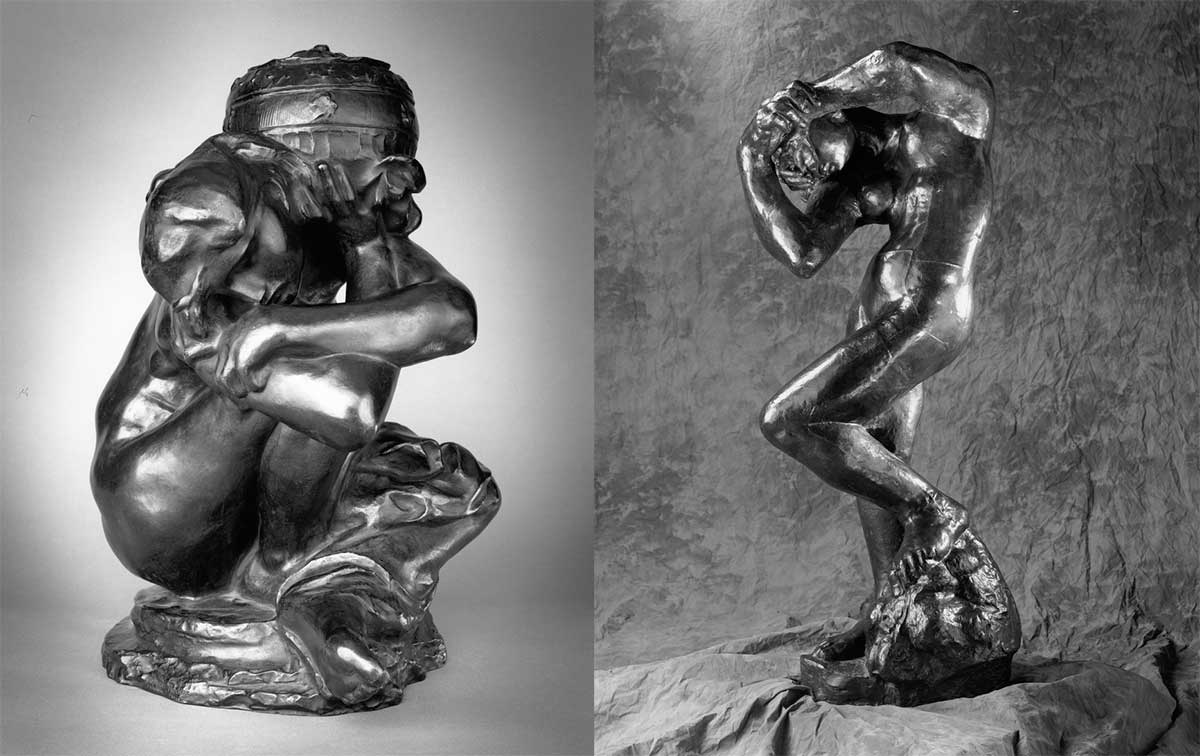 Early in his career, Auguste Rodin (1840-1917) shocked the French art establishment by creating the sculpture “Age of Bronze.” It depicted a flesh-and-blood subject, an ordinary man in the nude, instead of an idealized figure. Rodin went on to make dozens of sculptures dealing with the realm of human behavior. He viewed people as spiritual and physical, ugly and beautiful, joyous and anguished.

At SU Art Galleries, Rodin: The Human Experience focuses on the artist’s exploration of the human spirit. As he delved into human psychology, the sculptor rejected traditional depictions of people. Instead, he contorted limbs and torsos to create an illusion of movement, and used body language to convey emotions.

“Jean de Fiennes, Vetu,” standing more than 6 feet tall, depicts a figure from Rodin’s monumental sculpture, “The Burghers of Calais.” It draws on an episode from 1317, when English troops commanded by King Edward III besieged the French city of Calais. After 100 days, the populace was starving, and the king said he would accept the city’s surrender on two conditions: Six citizens needed to turn over the keys to the city and present themselves for execution. The half-dozen complied; after some deliberation, their lives were spared.

However, the artwork portrays Jean de Fiennes at a moment when he expects to die. He extends his hands with the palms facing upward. One foot is on the ground, and the other is in a tippy-toe pose. The mood is extremely tense.

“Tragic Muse” depicts a female figure born out of a rock. She lies on the ground crawling, struggling to move from her current position. Her left arm is missing. The artwork seems to suggest the agony of the creative process.

In “The Creator,” a small female figure whispers in the ear of an elderly man. Some analysts have argued that the man is Rodin himself.

“Meditation (With Arms)” again emphasizes the physicality of Rodin’s sculptures. It communicates introspection, as the subject sharply turns his head. The entire body is twisted, from shoulders to hips and legs.

“Iris, Messenger of the Gods” demonstrates yet another approach. The figure is headless, seemingly in motion, with the right arm and left leg extended.

Rodin: The Human Experience presents other noteworthy works: “The Benedictions,” in which two winged creatures come to bless the earth; “Dance Movement D,” a tiny but excellent work; “Ecclesiastes,” portraying a book and a woman in a contorted pose; and “Three Faunesses,” which plays off mythology and portrays a trio of women dancing.

“Fallen Caryatid with Stone” is also influenced by mythology. The caryatid, a mythical creature, strains under the weight of a stone.

In addition, the show has several works devoted to Rodin’s contemporaries: busts of writers Victor Hugo and Honoré de Balzac and composer Gustave Mahler; and a large sculpture of artist Claude Lorrain. The latter work is the most interesting of these pieces.

Finally, several pieces portray Rodin himself. These include a photogravure by American photographer Edward Stei-
chen, and “Portrait of Rodin” by English artist John Tweed.

The show, which presents 28 of Rodin’s bronze sculptures, can only sample his body of work. He created numerous sculptures, watercolors, and more than 10,000 drawings. Nonetheless, it highlights one aspect of his work, deftly developing the theme of human experience. Beyond that, it documents the creative energy of a highly influential sculptor who served as a bridge between academic art traditions and modern sculpture.

And the exhibition is also something of a departure. It didn’t originate with the Rodin Museum in Philadelphia or the Musee Rodin in Paris. It was selected from the Iris and B. Gerald Cantor Collections, which owns a significant number of Rodin’s works.

Rodin: The Human Experience is on display through Nov. 18 at SU Art Galleries, accessible through the Shaffer Art Building on the Syracuse University campus. The venue is open Tuesdays, Wednesdays, Fridays and Saturdays, 11 a.m. to 4:30 p.m., and on Thursdays, 11 a.m. to 8 p.m. For information, call (315) 443-4097. SNT