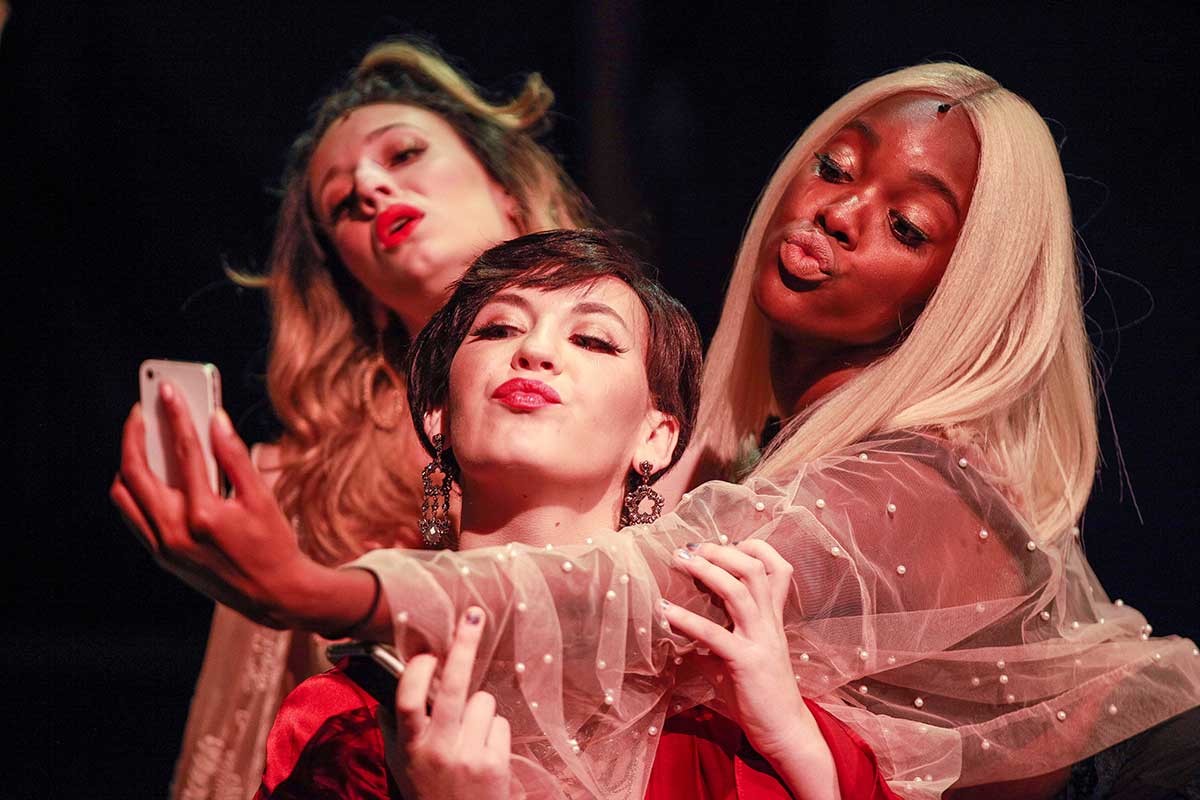 Director Lowenstein blows up the typical lyrical and whimsical show right before your eyes, creating an inventive and audacious new take.

As the most family-friendly show in Stephen Sondheim’s anxiety-ridden output, Into the Woods is produced quite often these days, 30 years after its opening. Good thing, too. For the season opener from the students of the Syracuse University Drama Department (running through Sunday, Oct. 21), director David Lowenstein is counting on audiences already being familiar with the four parallel plot lines: the three fairy tales of Cinderella, Rapunzel and Jack and the Beanstalk and the invented linking story of the Baker and his wife.

Lowenstein is also expecting audiences to remember the production history of Woods, which usually emphasizes the lyrical and the whimsical. That’s because he’s going to blow all of that up before our eyes. 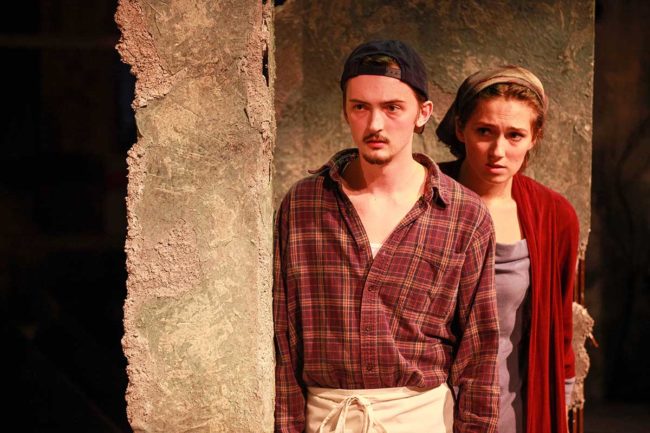 The retelling of “Into the Woods” discards the fantastical forest for a bombed-out building in the midst of a military conflict. (Michael Davis/Syracuse New Times)

Program notes tell us that the setting is a bombed-out building in the midst of a military conflict in the not-so-distant future. Jessica Ford’s set design suggests recent reports from Syria or Yemen. The 24-member cast flees in from the wings, hides among the remaining walls, and appears to divert themselves by telling stories. All are in random street clothes: one young man in an athletic jacket, a tall woman with a head scarf, and most with no ethnic or class markers.

The patriarchal Narrator, played by a self-assured Dick Cavett in the original, has been banished. In his place are three young women, Victoria Madden, Kristen Brown and Grace Gentile, one in a New York State Police uniform, the other two with laminated ID cards to imply they are working girls. None ever preaches or condescends.

Lowenstein’s take on the show might be mistaken for a deconstruction. Yet he avoids the excesses of the post-modernism found in revisionist revivals from 20 years ago. Lowenstein ultimately honors Sondheim’s music and lyrics and James Lapine’s book: He just wants us to encounter them anew. Music director Brian Cimmet is playing no tricks, either, so that the solo from the adulterous Baker’s Wife (Madi Beumee), “Moments in the Woods,” brings down the house for all the right reasons.

The director’s riotous inventiveness never fails him throughout the nearly three-hour production, with a gag or a visual flourish coming reliably about every minute and a half. Every member of the large cast gets a solo moment, too, with a dance step or musical flair. Even the actor in one of the least rewarding roles, Milky White the Cow (Noah Lentini), gets extended time in the spotlight. This was done for the art of it, but every parent who travels to see a child perform will have a heart-thumping moment. 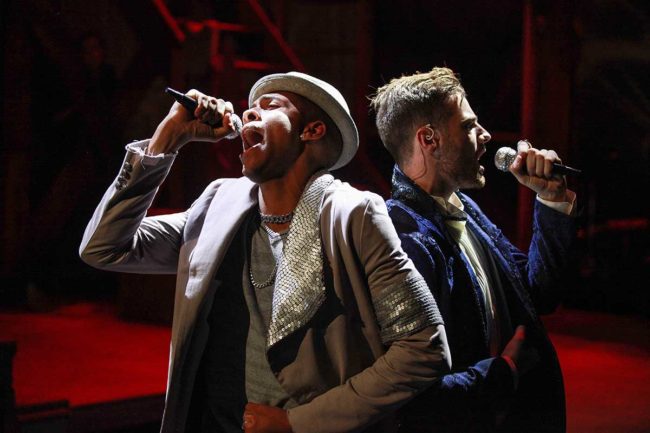 The role that will cause the most comment is Lowenstein’s innovation with the Witch, a choice role in any production. Stephanie Craven comes on as Kate McKinnon doing Jeff Sessions on Saturday Night Live, in a blue suit, red tie and required flag lapel pin. It’s the most audacious directorial call seen on any stage all year. At the end of the first act the Witch turns into a more benign figure, another persona from the McKinnon repertory, and it’s too much fun to be spoiled here.

Among other highlights, Rapunzel (Brooke Solan) lets down her hair guided by an electronic pulley, as it forms a yellow ladder. The two Princes for Cinderella and Rapunzel, played by Marckus Blair and Caleb James Grochalski, warble the duet “Agony” with microphones like Las Vegas lounge lizards. Cinderella’s Stepmother (Emma Vielbig) never stops taking selfies, and her daughters, Florinda (Emily Britt) and Lucinda (Shanel Bailey), make the prominent displays of T&A a comic turnoff. All told, SU Drama’s Into the Woods is a Helzapoppin’ of ingenious invention.