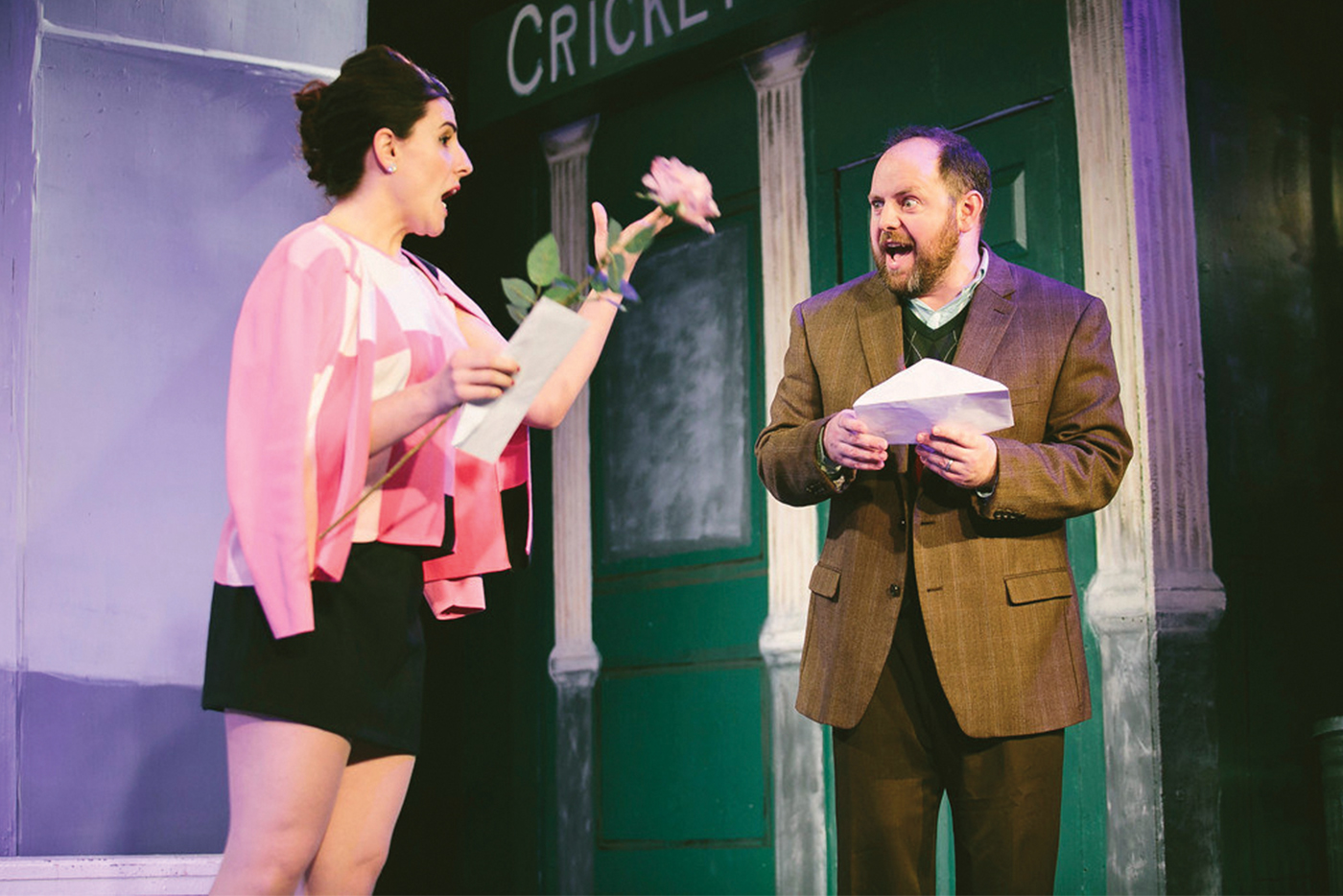 One Man, Two Guvnors showcases the hilarious highs that low comedy can achieve.

At the halfway mark of One Man, Two Guvnors, clueless Cockney loafer/leading man Francis Henshall breaks the fourth wall and chats with theatergoers about the parallel plots between Guvnors and Carlo Goldoni’s commedia dell’arte classic Servant of Two Masters (1746).

There might be three people who know about that literary connection during any given audience of Central New York Playhouse’s current production (running through Jan. 28). Everyone else will be constantly guffawing over the merry mix-ups, pratfalls and groin kicks that accumulate throughout this slapstick farce.

Playwright Richard Bean embellishes the Goldoni template with its move to England’s Brighton section circa 1963, just prior to the birth of The Beatles. In a plot that throws credibility out the window from the get-go, skiffle band member Francis (Josh Mele) ends up being a “minder” to gangster Roscoe (Lauren Puente). Yet Roscoe is secretly Rachel, wearing an unconvincing disguise to pose as her late twin brother in order to collect a debt.

Then the perpetually starving Francis gets a second minder job for another gangster, Stanley Stubbins (Josh Taylor), who is Rachel’s boyfriend and is still on the lam after bumping off her brother. This leads to the first act’s climactic set piece at a pub, as Francis’ attempts to keep his employers from colliding, even as he tries to satisfy his hunger pains, albeit with some interference from waitstaffers Gareth (Abel Searor, also music director) and Alfie (Binaifer Dabu).

Guvnors’ smash Broadway run resulted in major acclaim for James Corden’s incarnation of Francis, which led to a Tony Award and his current late-night TV gabfest gig for insomniacs who enjoy Corden’s carpool karaoke shtick. For this area premiere, director Dustin Czarny wisely opts for a furious pace that keeps all the random bits of business in constant motion. One running gag, for instance, gets funnier every time the word “Woolworth’s” is uttered.

Abel Searor, who plays an Anderson Cooper-styled foil to Rita Worlock’s Kathy Griffin as co-hosts during the Syracuse New Times Syracuse Area Live Theater (SALT) awards, offers extreme drollery as waiter Gareth, while Binaifer Dabu as the pacemaker-ridden Alfie runs amuck beneath her frizzled fright wig. Most of these characters also warble in front of standup microphones for several music hall numbers from the Lonnie Donegan era, a nod to the Fab Four’s early fascination with that style of music.

And as Francis, Josh Mele literally throws himself into his vivid performance. At one point Francis embarks on a self-reflective monologue that ends up being a split-personality dialogue between his roles as the minders, as he punches and slaps himself during a confrontation that ends with a garbage-can lid crashing onto his noggin. One Man, Two Guvnors showcases the hilarious highs that low comedy can achieve.