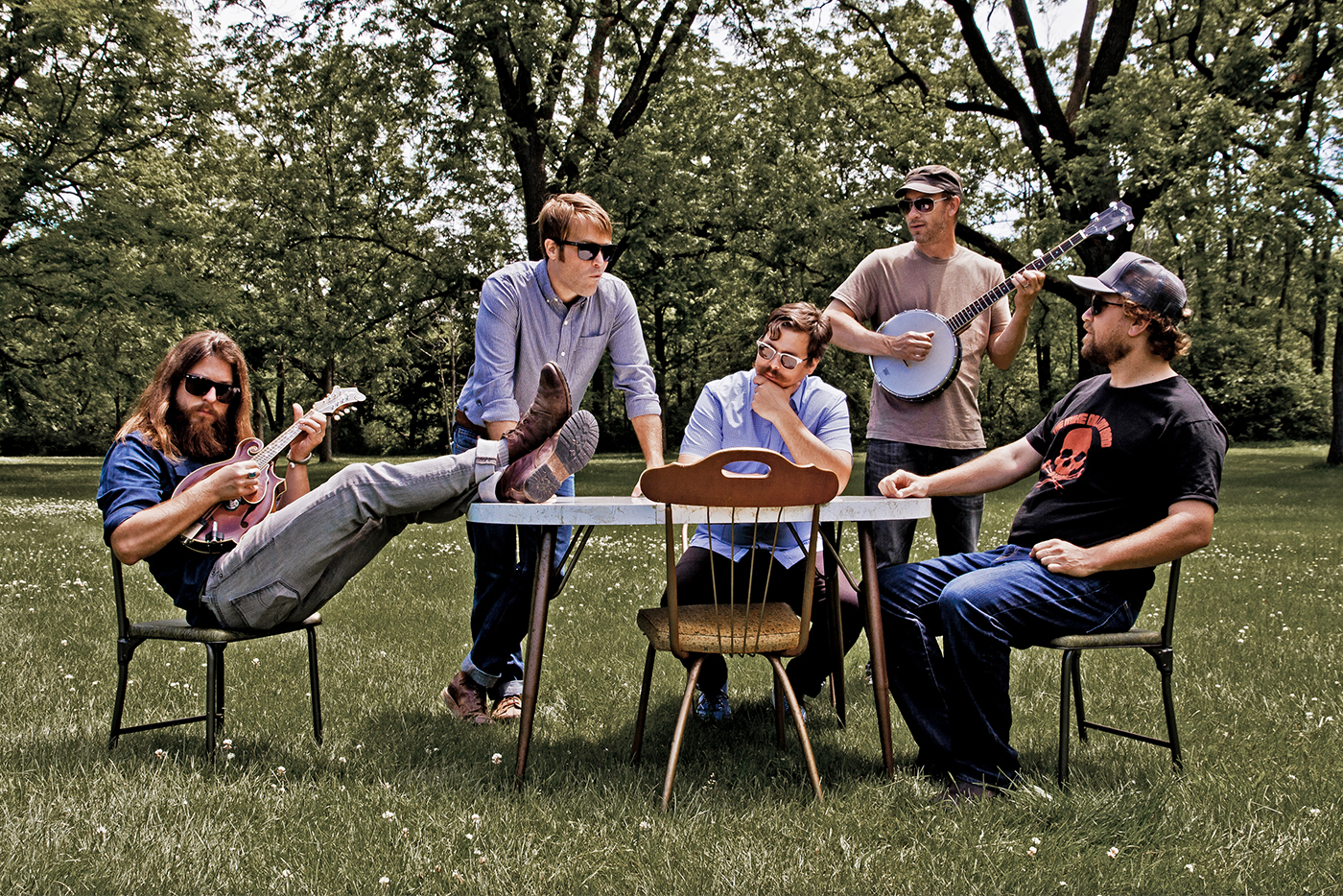 From humble beginnings to national success for Greensky Bluegrass.

When Dave Bruzza, Michael Arlen Bont and Paul Hoffman met at a Kalamazoo open mike in 2000, there was an instant connection. But that simple Michigan meeting didn’t just lead to more open mikes and eventually gigs: It led to national tours with the formation of Greensky Bluegrass.

Hoffman, the mandolin player, vocalist and songwriter for the group, says that even through 17 years of playing, the band hasn’t ever lost a member, it has only added to the tribe. Aside from Bruzza (guitar, vocals, songwriting) and Michael Arlen Bont (banjo, vocals), the outfit also includes Anders Beck (dobro, resophonic guitar) and Michael Devol (bass, vocals).

The group received major validation when they won the 2006 Telluride Bluegrass Festival Band Competition. By 2011 Rolling Stone was hailing them as the new representation of bluegrass for an entire generation, as they were playing with people like Larry Keel, Railroad Earth and Del McCoury.

“It’s all different and all the same at the same time,” Hoffman reflects. “We’ve come a long way and had some monumental achievements: playing Red Rocks, playing with Phil Lesh. Some are small and some are big, but it’s been like climbing a stairway. We’ve had consistent growth, not some big, overnight success that landed in our lap. I’m stoked to be able to do what we do and be more meaningful for people every time. It’s more than we could have asked for.”

While Hoffman was traveling through a snowy Colorado wonderland, he took a few minutes to speak with the Syracuse New Times about the growth of the band, their new album and how many things have changed and some have stayed exactly the same.

I started viola when I was 9 or 10, then guitar and mandolin when I was 18. I saw David Grisman play and was intrigued, so I bought one. It was serendipitous that I became a mandolin player.

We had a gig where they paid us $200 and gave us a place to stay. We went all the way to West Virginia (from Michigan) for that.

How did things change?

Telluride is not a huge festival, maybe 10,000 people, but it has a really wide grasp on the country. People from all over go to it. So after we won, we’d run into someone in Wisconsin or Iowa or Atlanta who would say, “We saw you win the contest!” It was a little whisper in everyone’s ear.

It put wind in our sails that we weren’t wasting our time, so we started really going for it. All these albums later, we’re still doing the same thing: trying to get more people to see us in every town. We’re trying to bring new ideas and try new things with our instruments that people haven’t done before.

I’m honored and excited to go places with our music. I’ve gone across this entire country more times than I can count. There aren’t a lot of highways I haven’t been on. It’s awesome that music can do that. That contest gave us the confidence that we were onto something and not just wasting time and postponing life.

Your new album is titled Shouted, Written Down & Quoted. What are you trying to say with that?

There’s a lyric in one of the songs on the album (“Hold On”): “But there’s always two sides to the way both of the stories go/ sometimes things left better unspoken/ should be shouted, written down and quoted.” There are obvious things you shouldn’t say, where things will get assumed and then messed up. That’s the easy meaning. It’s interesting what the title has to say. We’re not intentionally saying something political. But it’s not unintentional, either.

Who is pictured on the album cover and what is happening?

It’s Douglas Fairbanks, the highest-paid actor during World War I. He and Charlie Chaplin were the charismatic front men used to rally support for war bonds in America. It’s a stock image we thought worked well with the title.

When you’re in the studio making a record, it’s unromantic. People are on their phones a lot during downtime. Our bass player started designing examples for a cover. Some were ridiculous, some were serious. The ridiculous ones were great. We pursued this one with an artist and really loved it.

Tell me about your writing style.

I try to write from the perspective of every man’s voice. It’s specific and vague. I’m not trying to be vague for effect; I’m trying to be vague for the art form. I like to remain neutral and unbiased, but when I write songs, I’m deliberate. Commentary or analysis are not my job as the artist. I said what I meant and if I comment, it can take away the experience of the listener.

In a song it’s about what you say, or don’t say. I can write a song about my dog dying, but if I never write the word dog in it, it can apply to some greater idea of loss and heartbreak I could never do deliberately in the hope it elevates the art.

How has your songwriting changed over time?

Myself and the guitar player are the primary writers. We’ve changed as we’ve learned things. In some ways it becomes more advanced and more complex as I learn more about my instrument and my craft. It’s a paradox of learning to do less. As you get older, you feel less of a need to prove your craft with more: more notes, more words, more tricks.

What advice do you have for artists who want to do what you do?

It’s just important to have fun. The other bands I know who are succeeding and doing well are the bands who enjoy what they do and have fun with it. There’s no secret. If the band is having fun every night, it’s worth witnessing. That joy and dedication is reciprocal. People feel it and they see it. They want to witness it. They want to enjoy it.