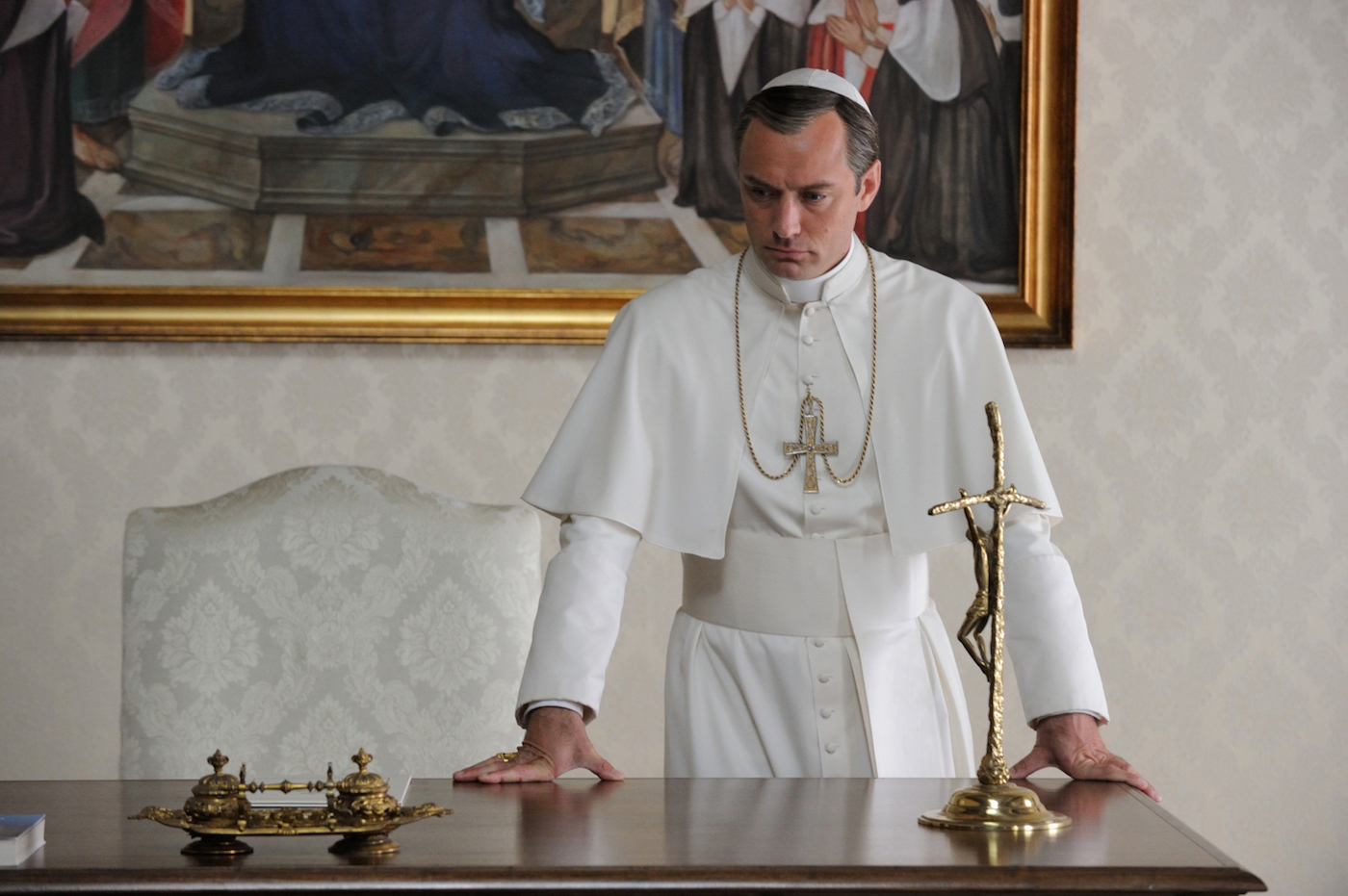 HBO’s new series The Young Pope is apparently a dark comedy. I’ve seen the terms “surreal” and “dream-like” used to describe it many times. Yet, despite this quality, I was not laughing. The definition of “surreal,” according to Merriam-Webster, is “marked by irrational reality of a dream.” Its synonyms are “unbelievable” and “fantastic.”

Rather, I was fixated more on how this story of Pius, the youngest Pope and the first American ever bequeathed the title, reminded me of the current state of American politics; a hot-headed, demanding, compulsive man unexpectedly emboldened by a position of the highest power that throws his subordinates into disarray. Sound familiar?

In summation, it felt more real than surreal, despite director Paolo Sorrentino’s wonky stylistic choices. This fixation is all too common today. Throughout 2016, I found myself relating what I was consuming to reality more often than not. This is normal for anyone, but during and post-election, it was noticeably distracting. It was by accident, not design, that so much of our popular culture seemed to so easily reflect reality in 2016, and that doesn’t seem to be slowing down in 2017; only in the future, it could more often than not be by design than accident.

Films that fit these attributes in 2016 include Arrival, a movie that is more naively hopeful (but brilliant) in its execution. The film follows a linguist played by Amy Adams who is recruited to solve an alien species’ language that has come to Earth with a warning. Its ultimate message of unity is one that is less reminiscent of our current predicament and more in retaliation to it. Nevertheless, it reminded me of the harsh political climate we find ourselves in and how it has desperately fostered a need for tolerance of those who are different than us.

Hell or High Water, another Oscar hopeful this year, is more evocative of the working class that helped elect Trump. It follows two brothers in Texas who rob banks in an effort to save their family’s property, and the aging Texas Ranger on their trail. In the beginning of the film, graffiti on a wall reads (paraphrasing) “Tours in Iraq but no bailouts for me.” The film (by accident, not design) is synonymous with the angry movement that propelled Trump to victory.

Its counterpart, Moonlight, showed another side of America, one where a young African-American struggles with his sexuality on the drug-riddled streets of Miami. It represents all that Hell or High Water doesn’t, and in doing so, still reflects today’s political and cultural landscape, because Trump’s election represents all that Moonlight doesn’t.

The Young Pope is just the latest to fall into this designation. It is a show that doesn’t easily fall into any type of genre; the same could be said for our president-elect. It dismantles traditional storytelling techniques but doesn’t exactly redefine or add anything worthwhile to them either.

It can be argued that The Young Pope paints Catholicism in a negative light, but I’d argue that it paints Americans in a negative light, which is fitting that it arrives at this time in this nation’s history. As the first American Pope, Pius is arrogant and needy. As the youngest-ever Pope, he’s confused and desperate to prove himself. He reaches out to old mentors while pushing another away (Sister Mary is arguably the only person in the show that admires him, yet he shows her disdain in the second episode when it’s brought to his attention that people use him and her in the same sentence; “A woman will never be pope,” he hisses). His ill-nature toward women and anyone who dares to criticize him is reminiscent of our almost-president.

So, too, is his speech at the end of the second episode, which is drastically different than the aforementioned dream he has at the beginning of episode one. In reality, when it’s time for Pius to address his audience of thousands, he nastily preaches to them about loving nothing but God, a stark contrast to his dream in which he encouraged the crowd to not forget what makes them happy (sex for pleasure among that). And when people begin speaking out of turn, he lashes out, much like what Trump did at his recent press conference. This appears to be the true Young Pope, the one in his dream an aberration. Both present unprecedented (or unpresidented?) problems for the Church.

In short, Pius is a contradictory character, but he also raises the question of just what qualities Trump represents in Americans. He was elected, so a large portion must think he represents them.

But, like the young Pope for the Church, maybe he doesn’t represent them in the best way.

Is this good for the future of film and television, to be constantly reminded of the real world, even if the intention is not there? There will still be art that acts as escapism, but art also reflects, and for the next four years it will reflect a Trump presidency. That presidency will be embedded into our subconscious, so even art that doesn’t necessarily mean to — such as Arrival and Moonlight — will.