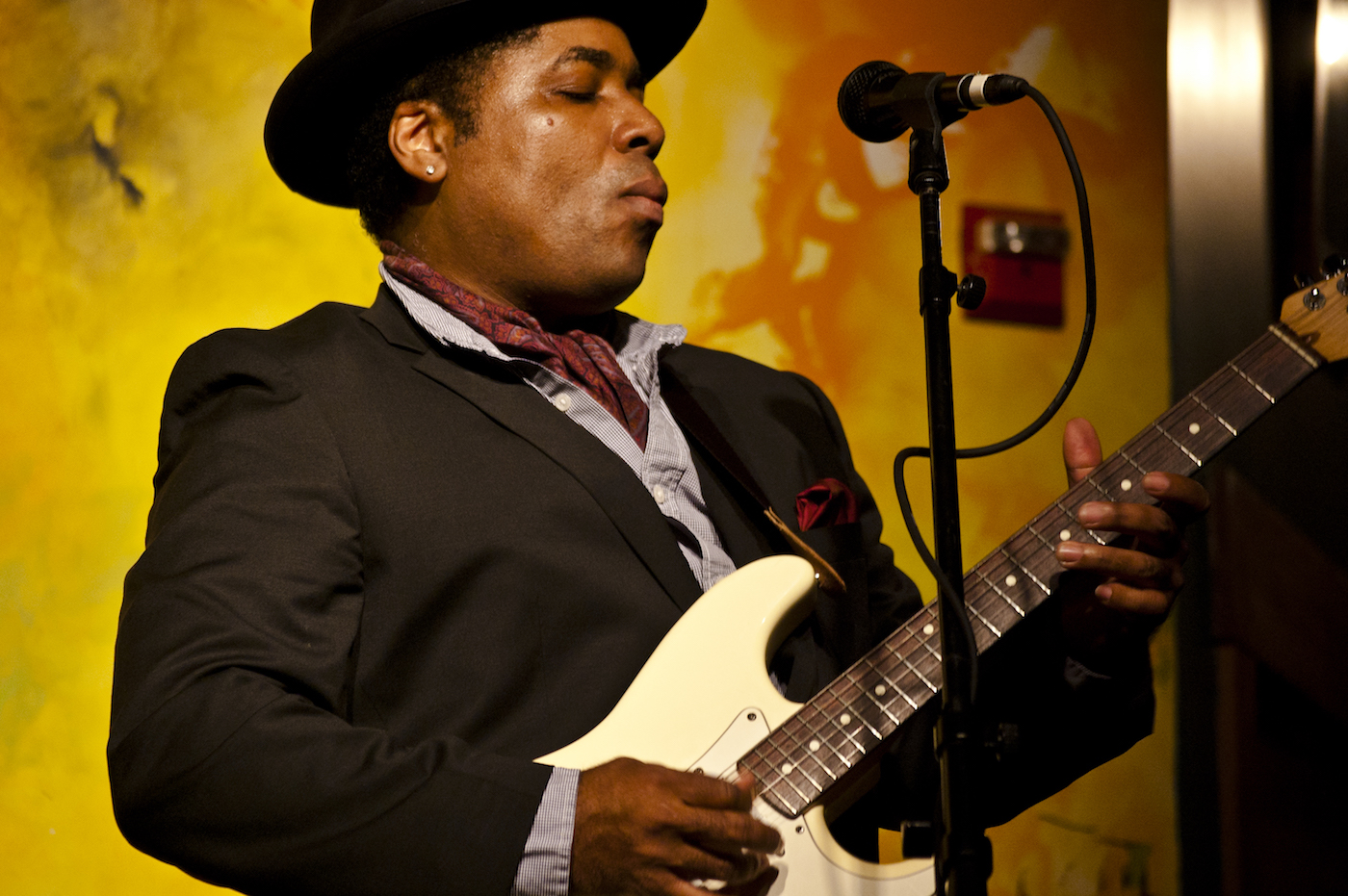 Blues artist Chris Thomas King explores what the genre means to him.

In a career spanning more than 30 years, Chris Thomas King is still keeping the blues alive. The songwriter, who is the son of the late musician Tabby Thomas, will perform Friday, June 2, 8 p.m., at the Earlville Opera House, 18 E. Main St. Tickets range from $18 to $40; for information, call (315) 691-3550 or visit earlvilleoperahouse.com.

The blues music started in the Deep South during the 1800s, and there’s been a debate regarding whether Mississippi (delta blues) or Louisiana (swamp blues) owns the original blues. King expresses his confidence in the latter.

King relocated his family to Prarieville, La., after Hurricane Katrina’s decimation of the southern region, but not even natural disasters can keep King and others dwelling on the negative. “We’re not even down and depressed at a funeral. A band plays, there’s a second line, we party and have a great time,” he said in a phone conversation. “I’m definitely going to bring a lot of the New Orleans spirit to the room, get people up and dancing.”

How has performing changed for you in your career?

I grew up performing in my father’s juke joint, Tabby’s Blues Box. I spent as much time there as I spent at home. It was a comfortable place to discover new music and develop my own style.

Performing in the music business has changed so much. Back in the day, we’d put out a record and then toured. It was OK to break even, because the idea was to push the album. These days the tour is a means to itself.

The recording process is something I really, really love. Writing and creating is my zone. Touring and playing live was something I’ve felt I had to do, but not begrudgingly. The band I’ve been playing with for almost 10 years features Jeff Mills on drums and Danny Infante on bass.

Did you feel the need to follow in your father’s footsteps?

No. My father was regionally well-known and respected, pretty much a legend toward the end of his life here in Louisiana. One of his most popular recordings was the “Hoodo Party,” which came out in 1961 through Excello Records. He was friends with Slim Harpo and that era of blues musicians.

I was definitely under his shadow early on. Then I started to record with major companies, like Warner Brothers, which allowed me to do my thing and put me into the international light.

The blues casts a shadow for all current recording artists. You’re compared to all these ghosts of the past, and it’s a challenge to create your own space and your own voice. I made the choice to be avant-garde, to incorporate hip-hop and not be limited by myopic blues purists.

How did you move past negative criticism with blending genres?

I was quote-unquote discovered as a folk blues artist, a coda of the whole folk revisionist blues movement. I was one of the last of the 20th century to be found by a folklorist, like Leadbelly and other musicians.

The thing is folk musicians do not make music with a computer, they don’t sample or they don’t use digital technology. In the 1990s musicians would put stickers on their records saying it wasn’t digitally recorded. There were these throwback bands like the Black Crowes that blues and folk aficionados disdained. They shunned Bob Dylan for picking up the electric guitar. If you were going to play the blues and incorporate drum machines or sample, they thought it was blasphemy.

It wasn’t just the fact I was doing hip-hop, but the whole aesthetic: It was me giving the finger to the folk-blues community, and so they didn’t like that.

You’ve stood by saying the blues isn’t solely solemn, but upbeat and about enjoying life.

It’s essentially freedom of expression and pursuit of happiness. It’s a philosophy, and that’s why it’s great American music. What has gotten lost in translation is that the blues started down here in Louisiana.

When we say we’re going to play the blues, it doesn’t mean we’re sad or depressed. That’s the English definition. We’re an old French colony, and the word comes from sacrebleu or sacre diem. Jelly Roll Morton, Sidney Bechet and a lot of black Creoles spoke French.

The blues is a salacious type of music. Morton’s parents kicked him out of the house, because they didn’t want him playing music inside. He wasn’t singing about how his girlfriend wouldn’t go on a date with him, but the lyrics were really raunchy and appropriate for whorehouses or gambling dens. It was nothing fit for polite company.

When Morton kind of started, it was a time where you’d go to jail if you were caught drinking a beer. There were blue laws everywhere, and you couldn’t buy alcohol. Women couldn’t go to a saloon and order a drink. Dancing was outlawed. The recording business hadn’t gotten started. Storyville (the red-light district of New Orleans) closed in 1917, and everyone outside of the district was conservative and superstitious.

My parents didn’t put their hands on my ears or tell me this music was bad. The Louisiana musicians are very proud of their music. It is enlightened music, and we were of a different region when compared to the Delta Blues in Mississippi. You don’t have to be sad to pursue happiness.

Do you have any superstitions?

I don’t think I’m superstitious. The blues makes fun of that sort of thing. We sing about how we got our mojo workin’.

This blues period we’re in is similar to Europe’s classical or romantic periods. Music is inspiring and has encouraged people to pursue happiness. Blues is a soundtrack to progress. It was part of the soundtrack to Woodstock. It’s even part of the recent incident in England, where people were going out to the Ariana Grande concert just to have a good time, and people with old, myopic beliefs were blowing people up. Why? The victims are free and they’re having fun. We still live in a world where this music can’t be played in certain parts.

Your last album, Bona Fide, came out in 2012. Do you have new material in the works?

Yeah! We just finished recording, and the album is going off to be mastered. It’s going to be called Hotel Voodoo. This may sound cliché, but I think it’s my best work to date. It should be out late July.

It’s about 40 minutes of music, which would fit on a vinyl album. The first side features a suite called “The Baron Suite.” The Baron, this guy with a top hat, is the guardian of the crossroads in voodoo culture. It’s the naughty side. The other side is called “The Jelly Roll Suite,” which features second-line drum rhythms and I’m playing piano, too.

Is songwriting difficult after all these years?

Songwriting isn’t difficult, but it doesn’t come easy. Writing in itself is difficult. (Laughs.) I’ve been working on a memoir and a new history of the blues. The process has been more difficult than I thought it’d be.

It’s been a number of years since the last album, and my plan was to record a long string of songs. After recording 60-plus songs, the toughest part is narrowing the list down.

What can people expect at your show?

I’m going to play a few new tunes, play a piano suite and I’ll rock out with an electric and acoustic guitar. And people will hear music from a couple of the movies I’ve been in, Ray and O Brother, Where Art Thou?

How was working with that Coen brothers’ film?

It was great. The thing about the Coen brothers is that they are craftsmen. They’re very nerdy, and they’re laughing after every scene. It was a great atmosphere.

(George) Clooney at the time was just starting to really make a name for himself. This was a critical and successful film for him. He was very down to earth. Although he doesn’t in the film or on the record, he can sing. Look at Rosemary Clooney. It’s in his blood.

We didn’t know that movie was going to do as well as it had. The same can be said about the soundtrack. The music was received so well for folk, soul and blues. I think the younger musicians discovered the blues through this film. It was really nice to have that opportunity, to play that role of a liaison.