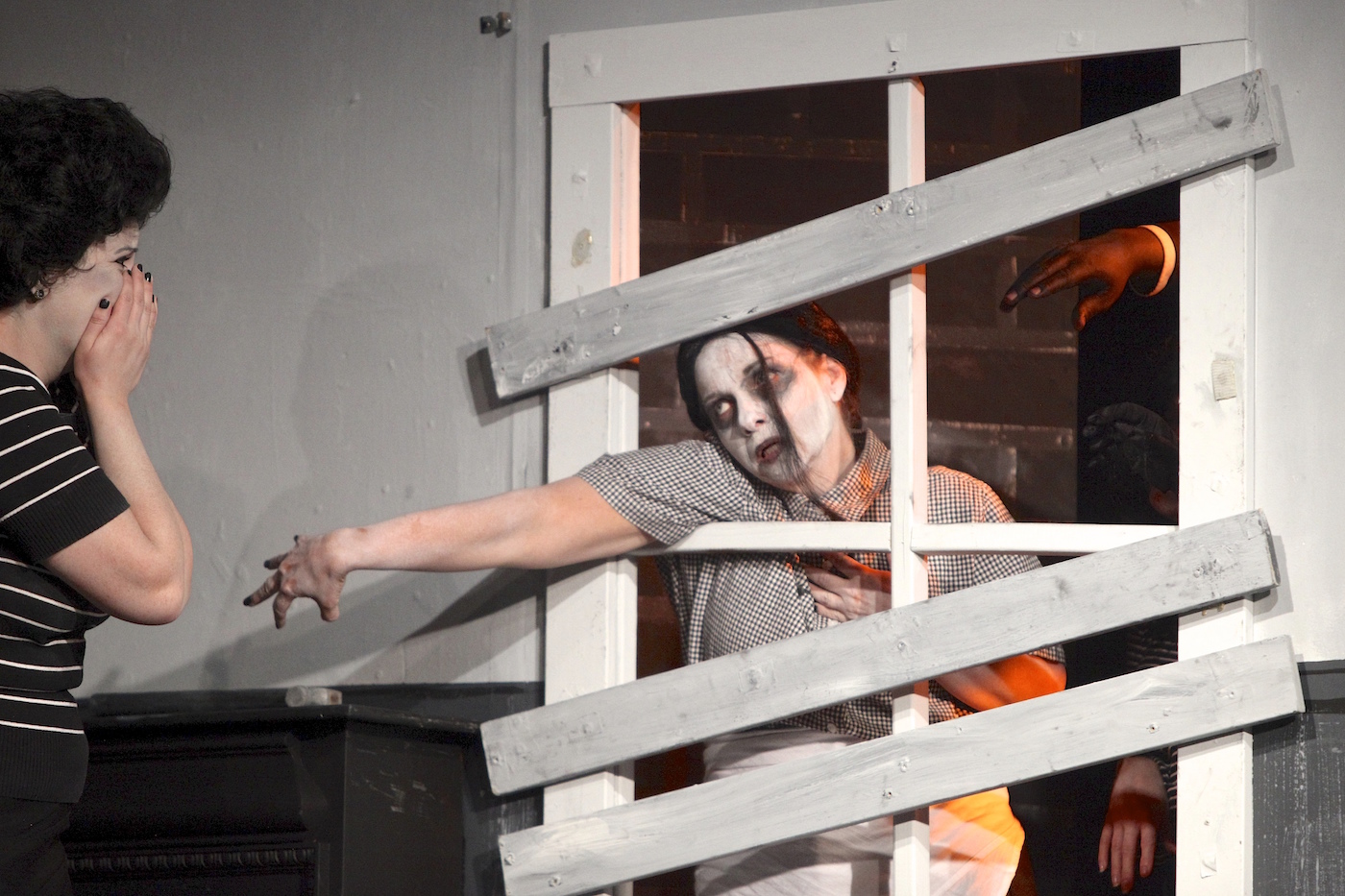 The hunger for zombies is satisfied in CNY Playhouse’s “Night of the Living Dead.”

The inexplicable mania for all things zombie continues to grow, spurred by the successes of cable TV series (The Walking Dead) as well as novels (World War Z, Pride and Prejudice and Zombies) that have led to cinematic spinoffs. There’s obviously a demographic that grooves to these end-of-days considerations involving the carnivorous undead, which meld the concepts of an episode of Survivor with the dining experience at a Chinese buffet.

It all started, however, with director George A. Romero’s low-budget, trend-setting 1968 horror feature Night of the Living Dead, the creepshow that raised the bar in terms of relentless nihilism and shocking gore. The Central New York Playhouse pays scrupulous Halloween-time homage with its streamlined stage adaptation of Night of the Living Dead (running through Nov. 5 at the company’s Shoppingtown mall venue), in which seven people are stranded in an abandoned Pennsylvania farmhouse as they attempt to stave off an attack of carnivorous corpses.

Lori Allen Ohm’s adaptation focuses mostly on the nightlong farmhouse siege, while condensing other elements that could not be transposed to the stage, such as cemetery visitor Barbara (Lynn King) and her escape from the ghouls during the movie’s long opening sequence. Then again, audiences who take in the floorboards version are surely fans of the sick flick, whose public domain status (the movie was never copyrighted) only increased its popularity by becoming more readily available through numerous TV broadcasts and as a VCR perennial.

And those aficionados are familiar with the film’s pop-up shocks, as well as nuances such as the reason why the basement door is mysteriously locked. They also know certain dialogue exchanges by heart, as Ohm retains the many keepers: “The cellar is the safest place,” “They’re coming to get you, Barbara,” and the infamous closing line, “That’s one more for the fire.”

Director and set designer Dan Rowlands is no stranger to the zombie oeuvre, having helmed Evil Dead: The Musical as the 2014 Halloween attraction at the playhouse. Rowlands adheres to the movie’s stark black-and-white visual style, with the cast members’ clothing and the single living room set all dressed in shades of greyscale. Unlike the flesh eaters’ shambling cadence, Rowlands’ show moves at a fast clip, although there are some unavoidable moments when it feels like a radio play.

Yet like those zombies lurking outside, the audience is also peeking into the farmhouse window, which adds a neat touch of voyeurism. On occasion, Rowlands will also dispatch some members of the pasty-faced walking dead (including a nun, a bride and a child) to prowl the perimeter while the audience watches the show, as the zombies lurch around like patrons at a Palermo happy hour.

Living Dead is mostly played with straight faces by the ensemble, with James Sanders as anti-hero Ben leading the serious tone. (Ben was played in the movie by black actor Duane Jones, an example of Romero’s colorblind casting that added an unexpected race-card wrinkle to the proceedings.) Sanders’ Ben has plenty of convincing moments, especially when his character resorts to clobbering cadaver craniums with a crowbar.

In a stage production devoted to perverse hunger games, Josh Taylor as the antagonistic Harry Cooper ably chews the scenery, although he also has the show’s meatiest role. “Play with the rabbit ears!” he snarls, as the survivors try to find newscasts on an old TV set. Korrie Taylor (Josh’s offstage wife) plays Harry’s long-suffering spouse, Helen, in scenes of domestic strife that fleetingly recall Who’s Afraid of Virginia Woolf?

There are several tongue-in-cheek moments, notably when a getaway truck with two passengers (Katie Tucker and Matthew Soffietti) explodes offstage, sending their body parts into the clutches of the munch-mode zombies for some impromptu bone appetit. The amusing artistic success of Night of the Living Dead might lead Central New York Playhouse and Rowlands to consider adapting director George Romero’s 1979 movie sequel Dawn of the Dead, which is set in an empty mall. The company wouldn’t have to venture very far for inspiration to mount that show.

Jackie Warren-Moore: Where She’s Coming From
Activism Honored At ArtRage
To Top