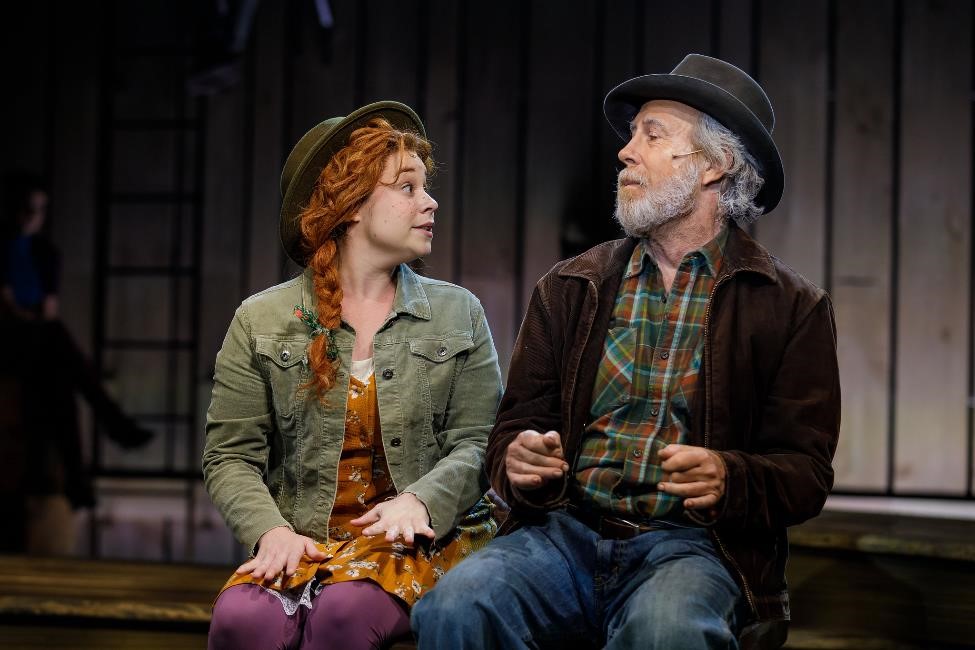 Matte O’Brien and Matt Vinson are two young Americans who think the most famous of all Canadian novels, Anne of Green Gables (1908), is really about us in our time. Although set in remote Prince Edward Island, the story of the plucky red-headed orphan Anne Shirley has sold more than 40 million copies and has been frequently adapted for stage and screen.

This new version, making its world premiere at Auburn’s Merry-Go-Round Playhouse through July 25, bears the subtitle “A New Folk Rock Musical.” That “folk” in the subtitle does not imply echoes of the Maritime Provinces, as in the Broadway hit Come from Away, but rather like Hair’s Galt McDermott finding a second youth.

Director Jenn Thompson, scenic designer Wilson Chin and especially costume designer Tracy Christensen show us how to find time and place. Action takes place on a bare raised stage, slightly tilted. Benches and wooden chairs can be converted into any needed props. Members of the large cast remain seated at the edge when not performing, reminding us that this is artifice.

Most of the adults wear late Victorian costumes, as action in the novel takes place two decades earlier. Younger members of the cast dress from later eras, from Archie and Jughead through the present moment with multicolored hair.

Author Lucy Maud Montgomery claimed to have witnessed the opening scene of the story and then imagined how the rest might have worked out. An elderly man, Matthew Cuthbert (D.C. Anderson), comes to pick up Anne (Mckenzie Custin), a red-haired orphan, at a rural train station, only to object that he would rather have had a boy. When the two arrive home at Green Gables, an even sharper put-down comes from Cuthbert’s stern sister, Marilla (Nancy Anderson), who snarls, “What’s that?” It’s an insult to Anne’s homely looks as well as her gender.

Emotionally bloodied but unbowed, Anne is the soul of resilience. She persists against nosey neighbors like Mrs. Lynde (Dawn L. Troupe), and a host of schoolyard bullies, led by dark-haired Gilbert Blythe (Chris McCarrell), who mock her carrot-colored locks. At one moment she buckles, trying to dye her hair black and getting green instead, but she rises again.

Given that she pushes back so determinedly, it fits that many of her musical numbers present resolve and heartfelt declamation. Anne is the title character and it feels that she’s on more often than Dolly Gallagher-Levy is in Hello, Dolly!. Many are quite affecting, such as “Did You Know” in the first act. Mckenzie Custin as Anne is luminous and powerful throughout.

Matte O’Brien, who provides the book and lyrics, has a local connection. He is a graduate of the Syracuse University Drama Department, where he was a protégé of Marie Kemp, appearing memorably in shows she directed, such as Into the Woods.

Some theatergoers actually had a head start on O’Brien and Matt Vinson’s version of Anne of Green Gables. It was mounted last July for four sellout performances at The Pitch, the summertime workshop roster of new musicals presented by the Finger Lakes Musical Theater Festival at the Carriage House Theater, located within the Cayuga Museum of History and Art in Auburn.