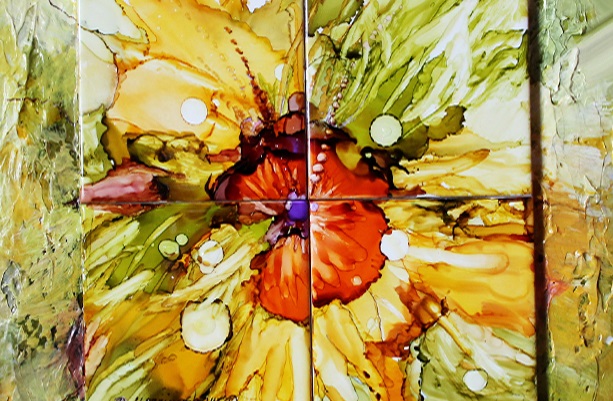 The new exhibit at the Edgewood Gallery, 216 Tecumseh Road, spreads an array of colors throughout the venue. Another Perspective encompasses purple, orange and other colors seen in Amy Bartell’s pieces, various colors for Delores Herringshaw’s artworks, and colors befitting Jason Howard’s latest body of work, glass sculptures depicting birds. And Sharon Alama’s jewelry plays with fuchsia, turquoise and other hues.

The colors, of course, are just one element of this group show. It displays pieces from Bartell’s “Little House, Big Sky” series, inspired by her observations of Provincetown, situated at the very end of Cape Cod. In that series, she’s not portraying Provincetown landmarks like Macmillan Pier or the sand dunes in a realistic context. 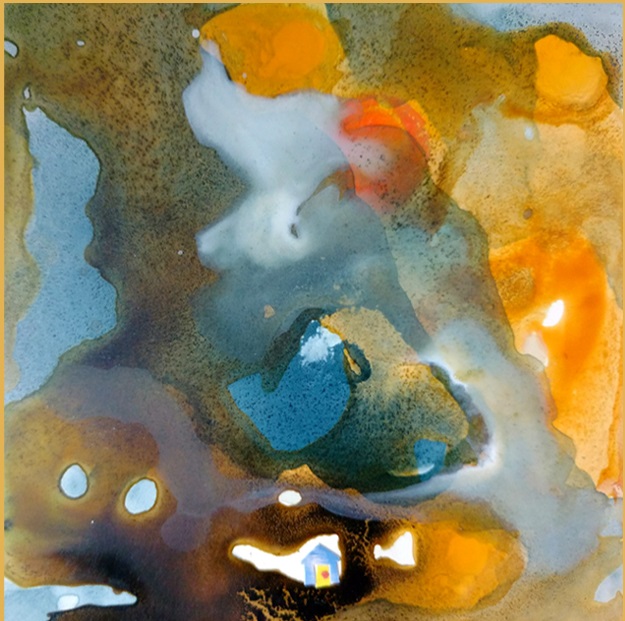 Instead, her creations, done in gouache, ink and watercolor on clayboard, interpret sky, sea and a few landscapes, conveying visual impressions. In “Day by Day,” blue sky drifts downward and encroaches on land. “Harbor Mist” includes a glimpse of a boat but features the fog that’s a staple of this coastal town. “Maybe the Moon” offers a nontraditional view of a familiar sight; the moon is simply a jumping-off point for the artist.

Other works reflect the series’ depth. Bartell moves from “Salutations,” with its mix of colors, to “Tidal Waves,” highlighting orange, from “Memory and Its Ghost,” portraying a sky dotted by small shapes, to the stars illuminating “Calliope Sky.” Every piece has a small house at its bottom border, but that’s a recurring motif, not a way of surveying Provincetown architecture.

And Bartell is clearly comfortable working small. Although “Dune Shack” is tiny, it’s a fine piece. There she references Provincetown history. Over the years, artists, wanderers and others have lived in dune shacks on the edge of town.

Delores Herringshaw, who works with alcohol ink on tile or vellum or other surfaces, has varied artworks on display. There’s “Red Tail,” which depicts a hawk against a greenish background. “Fragile” both portrays delicate leaves and sug- Bird is the word: One of Jason Howard’s works on display at Edgewood Gallery. gests a larger theme. It conveys a sense of nature’s changes and the fragility of all life on earth.

“Come into My World” views a country house and its surroundings, while “In the Clearing” presents an opening in a forest, influencing viewers to speculate on what comes behind it.

Herringshaw works skillfully in pieces such as “The Breakers” and “Ebbtide,” both of which reference scenes by the ocean. The latter work is rough and raw, with dark sky and waves crashing into shore. And look for “Heart and Soul,” a nicely detailed artwork. 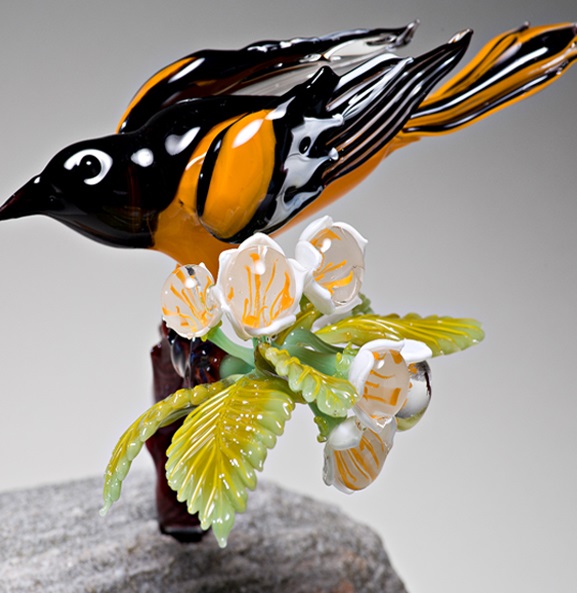 Jason Howard has started making birdthemed art glass during the last year. This exhibit presents sculptures depicting a goldfinch, white dove, Baltimore oriole, blue jay, and red-breasted woodpecker, among other birds. The artist is able to communicate not only the woodpecker’s striking colors but also the visual appeal of a one-color dove.

The exhibit also samples Howard’s previous creations such as bowls, a floral sculpture positioning four vessels atop a rock, and a piece from his “Soul Cage” series.

In her jewelry, Sharon Alama works with thick watercolor paper, which she tears, folds, varnishes and embellishes with beads, threads and charms. At Edgewood, she has a variety of earrings and collage pins on display.

Another Perspective touches several bases, starting with the colorful works seen on gallery walls and on pedestals. It also updates the artists’ work, celebrates disparate media and a few connections, and presents a bunch of artworks for viewers’ consideration. Thus, it’s a successful exhibition. 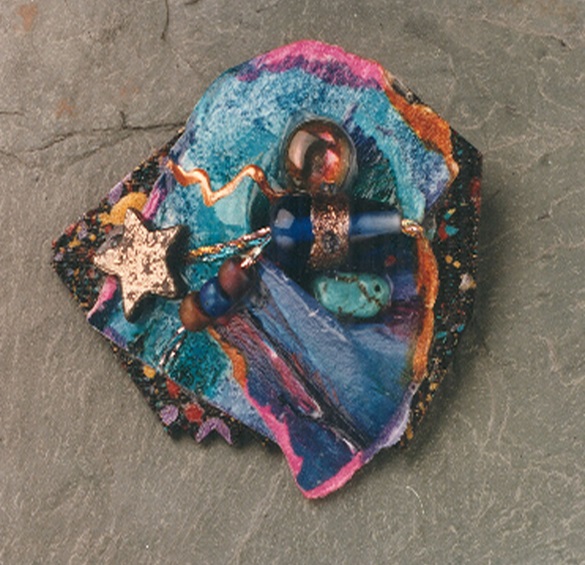 The exhibit runs through Aug. 3. Edgewood Galley is open Tuesdays through Fridays, 9:30 a.m. to 6 p.m., and Saturdays, 10 a.m. to 2 p.m. For information, visit edgewoodartandframe.com.