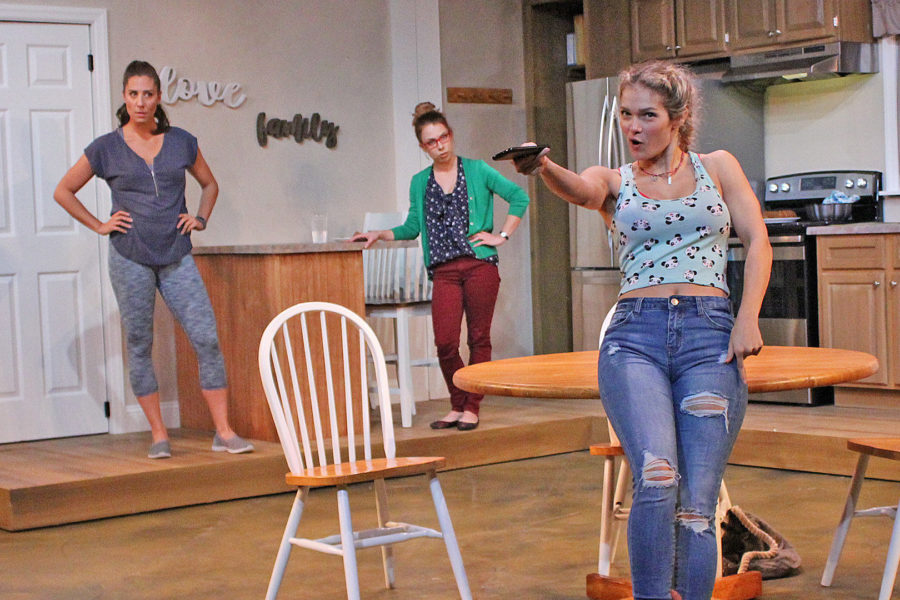 Last year it was an obscurity, Katherine DiSalvino’s Nana’s Naughty Knickers. This year’s choice, Women in Jeopardy! (through Saturday, Aug. 25), comes with stronger credentials, its premiere having been a surprise hit at Rochester’s Geva Theatre Center just three years ago.

Better yet, its playwright is Wendy MacLeod, a darling of off-Broadway for shows like The House of Yes (1990, later a Parker Posey movie), about a woman who thinks she’s Jackie Kennedy. What she has done here is both edgier and funnier.

Action begins when two plainly dressed, 40ish divorcées, the taller, talkative Jo (Stefanie Londino) and the shorter Mary (Charlie Jhaye), retreat to a stylish kitchen to fret about Liz (Rebecca Mason-Wygal), a friend they have left in an off-stage room. Liz has brought around her dodgy new boyfriend Jackson (Nicholas Wilder), a dentist who says he’s “in need of company.” They also reflect that the news has reported on a missing dental hygienist. Hmmmm, didn’t that missing woman also work for Jackson, the man with Liz in the next room?

Splendidly creepy, Wilder’s pale dentist projects a nervous but somehow threatening countenance. His few words are chock-full of offenses, including a tasteless crack about the missing hygienist. What could Liz, who is more glamorous than Jo or Mary, possibly see in what looks like a dating service reject? Worse, even without knowing anything about Jackson, Liz has already OKed his camping venture with her temptress daughter Amanda (Amanda Walker), with her tumbling golden locks, tight jeans and exposed navel.

Following the lead of Lucy and Ethel, Mary and Jo seek solutions through two different men. One is a uniformed officer named Kirk (Nicholas Wilder, again), who does indeed look very much like the dismal dentist, but with a more reassuring manner and a penchant for lively dance steps. Curiously in this women’s comedy, MacLeod has generously assigned the most fun to the guy in this double role.

There’s also Amanda’s hunkish ex-boyfriend Trenner (Ethan Rich), a snowboarder who might not have been a top student, who agrees to go to the campsite and defend Amanda should she be under assault. He also agrees to go to Mary’s kitchen, where he displays an unexpected lust for older women, although director Kathryn Markey and costume designer Orli Nativ have not made Mary look anything like a cougar.

MacLeod, with her Yale degree and lofty writer-in-residence gig at Oberlin College, has succeeded in writing a really superior sitcom. Finding love is an irrelevance, as all our attention goes to two middle-aged resourceful babes.