There is a fascinating Buzzfeed article I came across about a year ago titled “23 Facts That Will Totally Fuck With Your Perception Of Time.”

Among the more interesting of those listed include the fact that the 10th U.S. president, who served from 1841 to 1845, has two grandchildren who are still alive today. Betty White is literally older than sliced bread. And the oldest living person (who died this spring) was born closer to the signing of the U.S. Constitution than to the current day.

I had the same kind of reaction about a month ago when I was asked to write a web article about an “I Voted” sticker contest initiated by Gov. Andrew Cuomo. I soon figured out that the contest was about searching for a new design for the stickers handed out at polling places on ElectionDay, and that the design would commemorate the 100th anniversary of women’s suffrage in New York state. It was fitting, given that this year, the day before Election Day was the actual anniversary day.

And while 100 years can seem like a long time, it’s but a small part in American history and the history of the human race. And women have only been able to vote for that short period of time?

I mean, there are people alive today who were born before women were allowed to vote.

Now I’m perfectly aware that women nationally gained the right to vote in 1920 with the 19th Amendment to the U.S. Constitution, and I know that women’s suffrage was established in New York in 1917, the 17th state to grant that right.

But it really hit me at that moment. Somehow we were able to abolish slavery, put telegraph lines on the ocean floor, make airplanes fly, cross the Atlantic in six days, establish the income tax, and make “Exit” signs above doors mandatory before half of the nation’s population could take part in the fundamental right of a democracy.

It hit me again on Tuesday when I went to vote myself. As I was filling in bullets for town judges and state referendums — things that affect both the men and women — I couldn’t help but think “right now, I’m doing something that women couldn’t do in this state until 100 years ago.” 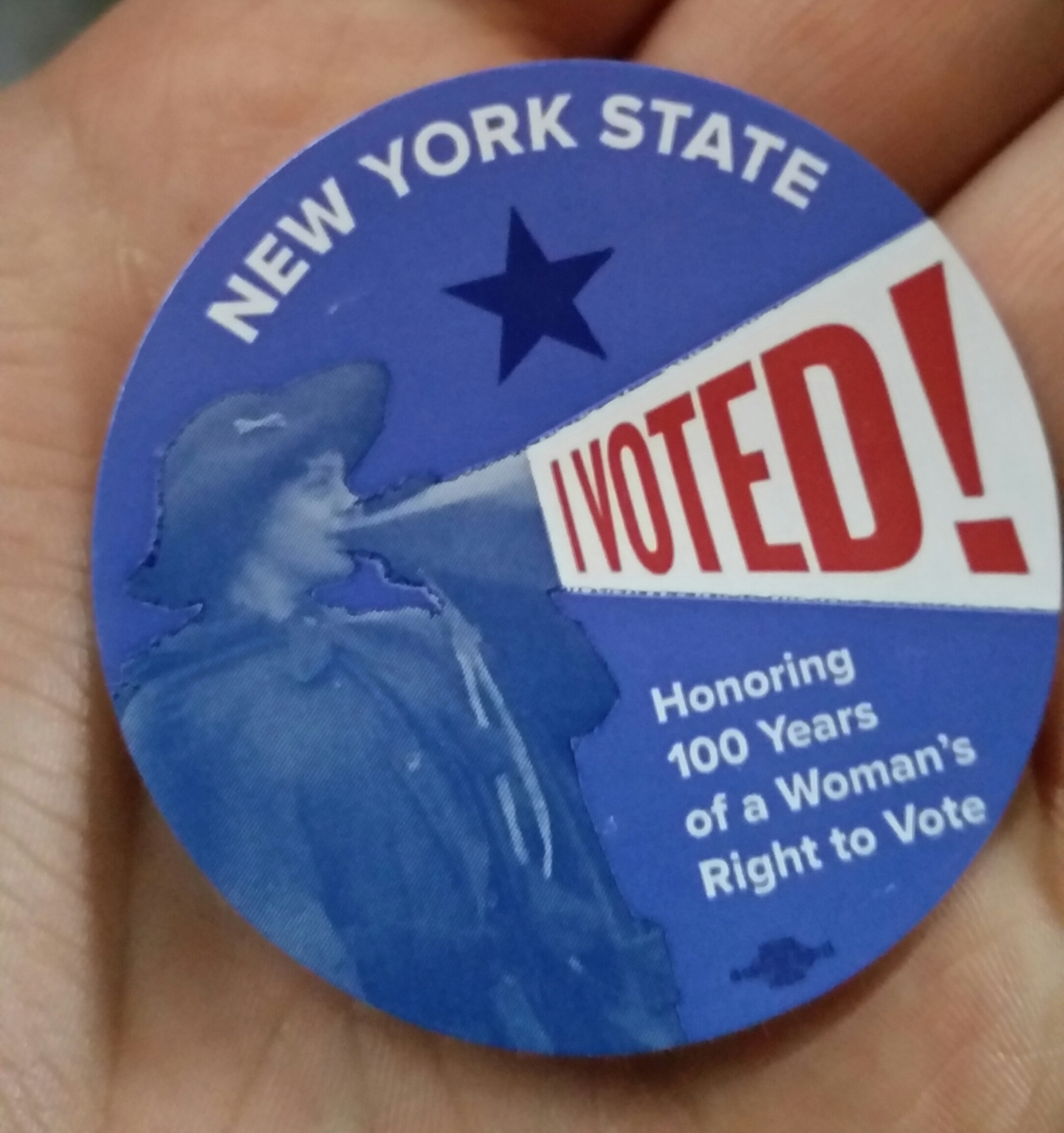 It seems unfathomable now. It almost made me angry in the moment.

But then I was handed my sticker.

I was able to walk home with Rosalie Jones, a suffragist who led a 150-mile-long march from New York City to Albany in 1912 with a petition that earned Gov.-elect William Sulzer’s support for the movement. She’s the one featured on the sticker.

And it made me think about all the strong women I’ve been lucky enough to know in my life, from family members to friends to work colleagues. I’ve had almost all female superiors and bosses in my professional career, and they have taught me so much. And there’s so many women in my work field who have inspired me.

It made me think of where we are in central New York. A short drive down the road is Seneca Falls, home of the National Women’s Hall of Fame, where Lucretia Mott and Elizabeth Cady Stanton gave birth to the Women’s Suffrage movement with the first women’s rights convention in 1840.

It made me think of something else too. Another item on the list in that Buzzfeed article is one I quote often as one of the greatest accomplishments in human history, and a very symbol of our abilities if we dream hard enough. Somehow, just 66 years after the first airplane was able to leave the ground, we landed someone on the moon.

I like to think of women’s suffrage in the same way. Just as Leonardo da Vinci’s flying machine was a far cry from the Wright brothers centuries later, the women’s suffrage movement was one long process, built by generations of ambitious women. Then in 1917, it got off the ground.

Then it flew high. Look how far women have come from just being able to vote. So many of them now hold powerful political positions, own businesses, run schools and hospitals and so much more. One even came close to being president.

I guess what I’m trying to say is, there’s no need for me to feel disturbed that women received the right to vote only 100 years ago. Instead, I should feel amazed and heartened by what they have accomplished in the 100 years since.

As far as I’m concerned, they’ve made it way further than the moon.