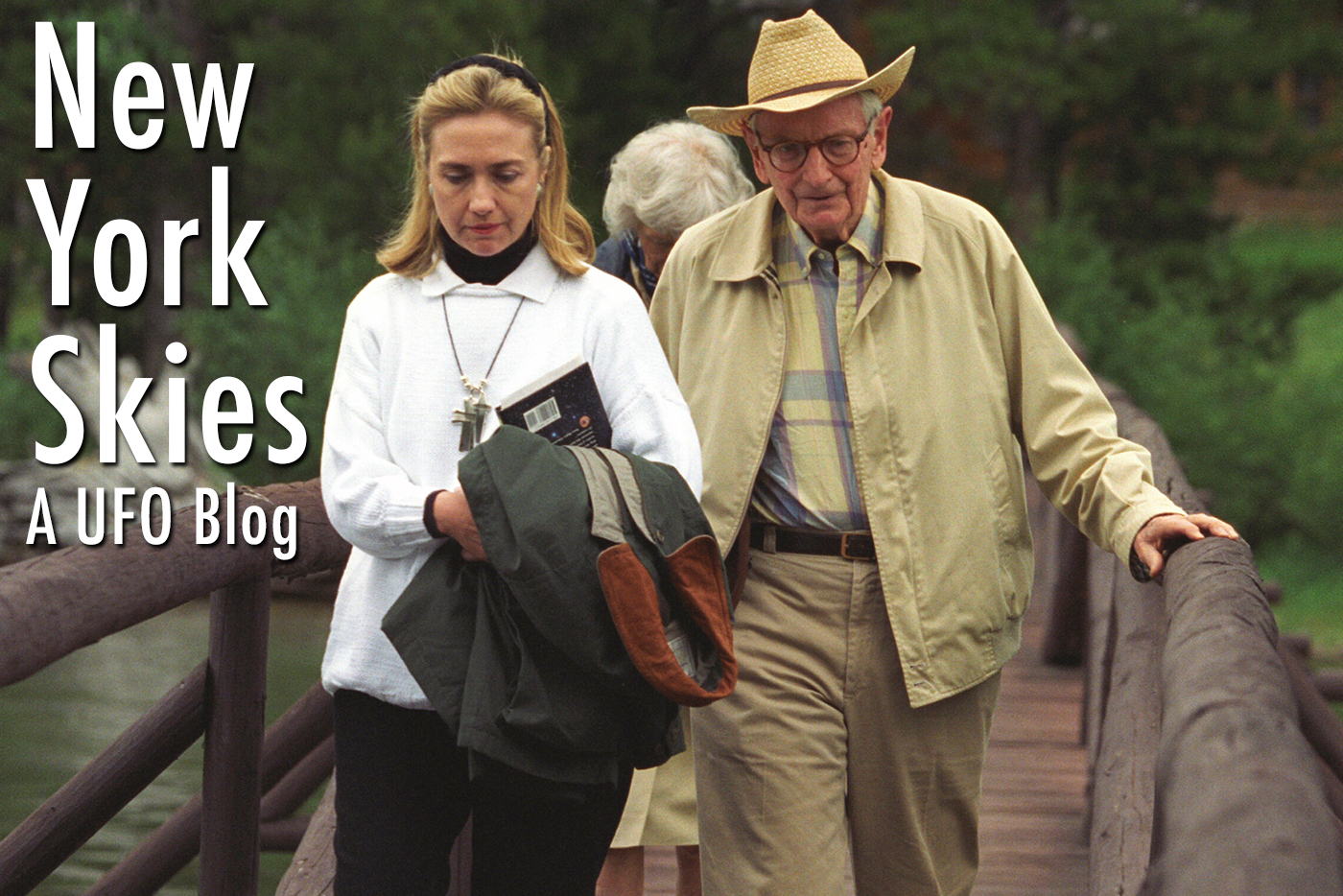 If Hillary Clinton were to unveil extraterrestrial secrets, a number of things need to fall into place.

Hillary Clinton in 1995, carrying a copy of "Are We Alone: Philosophical Implications of the Discovery of Extraterrestrial life" by Paul Davies, with Laurence Rockefeller. Photo provided by Clinton Presidential Library via The New York Times
Share
Tweet
Share
Share
Email
Comments

Will Hillary Clinton be the mother of disclosure? That is the question being asked at the activist level of the UFO community.

For over 70 years, all of the evidential information related to an extraterrestrial presence in the the United States has resided with the Unacknowledged Special Access Programs within the Pentagon. While the CIA probably has had its own special access program, it has been the military and intelligence complex that has held onto the lion’s share of suppressed information. After all, since the early days of encounters with UFOs, the subject matter has been of defense concern at the highest levels of the Pentagon.

In the 1960s, when Arizona Senator Barry Goldwater asked his friend Gen. Curtis LeMay for access, LeMay scolded Goldwater and told him not to ask him again. In the Cold War era the topic of UFOs and extraterrestrials had a classification higher than the H-bomb. During that time, the defense implications of the ET phenomena were overwhelming in the minds of the intelligence community, something that justified all efforts to impose a “truth embargo.”

The embargo has impacted our society on many levels. First, in the aftermath of Sept. 11, our culture experienced, and is still experiencing, a form of cynicism. On one hand we’re supposed to report what we see, but we’re not supposed to report UFOs. On the scientific level, the embargo has made the topic of extraterrestrial and UFO research laughable in most academic circles, a place where peer-reviewed research should be happening. Why? Because the truth embargo made the topic matter taboo and a threat to academic career advancement.

Within non-Pentagon scientific research institutions like the National Academy of Sciences, the 1968 Condon Report killed any possibility of any money to support public research. Of course, it appears there has been extensive research on the topic of extraterrestrials and their technology, but it was funded with a deep, dark budget.

On a local level, the truth embargo has impacted public libraries. Recent research has observed that the average public library is sadly lacking books on the topic of UFOs and extraterrestrials. There are over 50 years of excellent books out there but they aren’t generally on public library selves. Did the 1968 Condon Report send a signal to several generations of professional librarians that all extraterrestrial subject matter is pure silliness?

The truth embargo, while it made sense 70 years ago in terms of national security, doesn’t make sense now. It also didn’t make sense back when Bill and Hillary Clinton were involved with the Rockefeller Initiative, an effort to get the extraterrestrial issue declassified.

Now, if President Obama were to be the disclosure president, a number of things have to happen:

It appears U.S. presidents and secretaries of defense haven’t been routinely briefed on extraterrestrials — not since President Nixon, at least. Even if President Obama has been briefed, any announcement that he might make would have to be backed up by the Pentagon, since the USAPS have all the supporting evidence.

Enter former Secretary of State Hillary Clinton, who early in her presidential campaign told various interviewers that, if elected, she’d get to the bottom of it. Well, she didn’t get elected, but she still has it within her power to help make the revelation happen. Clinton needs only to grant an interview to a respected journalist and discuss the Rockefeller Initiative in depth. Such a high-profile story in mainstream journalism would cause a media storm and a clamor to the White House for more information.

The president would call upon the secretary of defense, who in turn would reach out to the Pentagon establishment for help. It is then that the USAPS managers could step forward and brief the secretary and the president and present all the respective supporting evidence.

In this context, the president and secretary of defense get the in-depth briefing and all the evidentiary data to support any disclosure revelation about extraterrestrials. The president gets to make his historic announcement with the full support of the Pentagon establishment.

So the ball is really in Hillary Clinton’s court. Does she want go down in history as the proverbial mother of disclosure, or not?