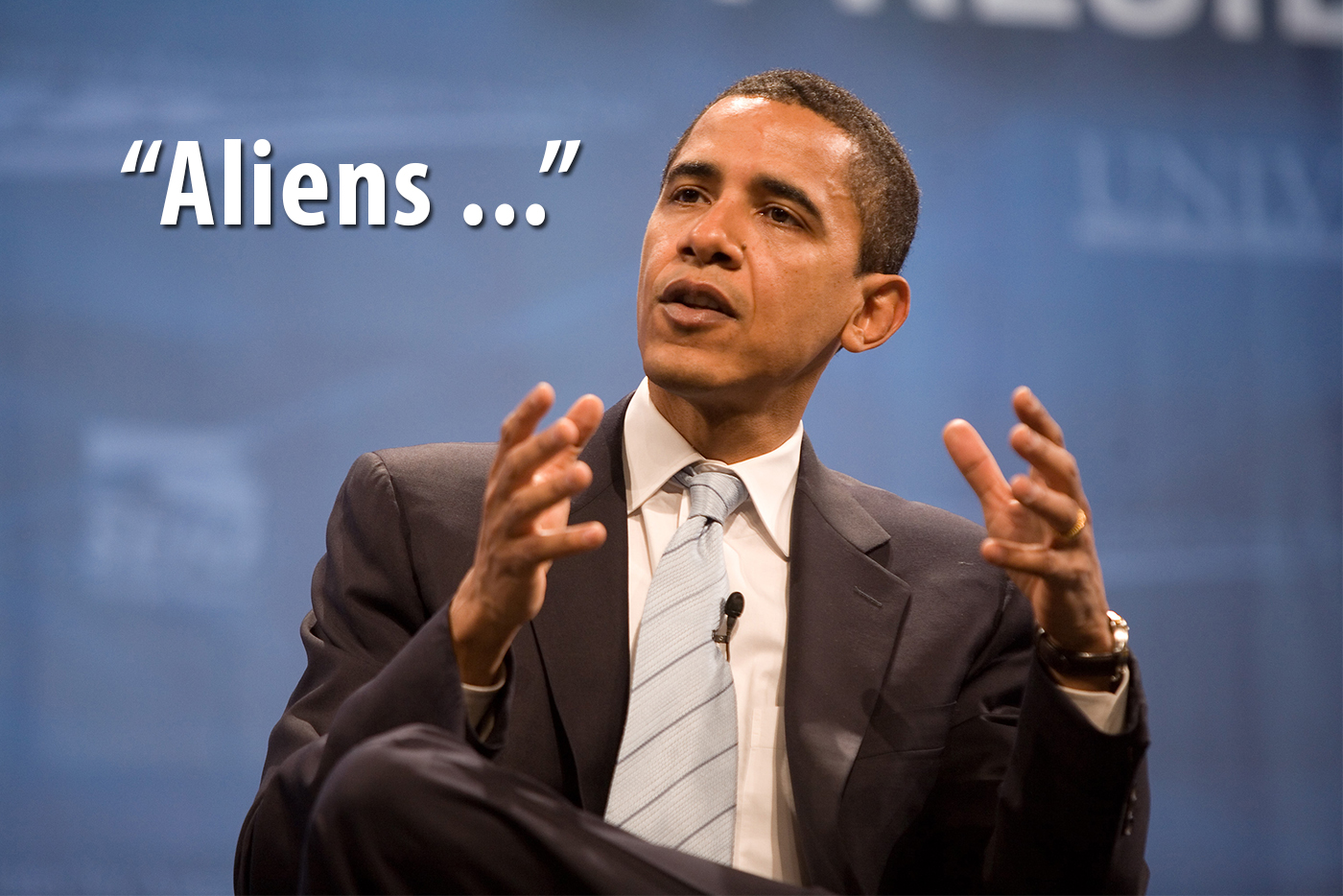 Could Barack Obama be the disclosure president?

Imagine that it’s after the election. The new president-elect is enjoying the glow of winning the election and has a transition team busy recommending cabinet positions. The post-election period after any presidential race is usually the time of the so-called incredible shrinking president. The outgoing president seems to fall out of the news media’s eye as the country prepares a new commander-in-chief. But this post-election cycle may be different.

Imagine you’re at a White House press conference. At this event, the White House press secretary announces the president will address the nation. When he enters the room, he is accompanied by the Speaker of the House and the Senate Majority leader. Also with him might be the head of the Central Intelligence Agency, as well as the secretaries of defense and homeland security. Perhaps even the chairman of the joint chiefs of staff.

The president would most likely get right to the point. He’ll tell everyone that the United States government has been in contact with several spacefaring races, and has even entered into diplomatic relationships with some of them.

This is what governmental disclosure would look like and it could be in the near future. The buzz from the UFO community and professional odds makers suggest that President Obama wants to be the disclosure president. Who could blame him? It would be a historic moment for him, our country and the world.

Of course, after disclosure, the aftermath presents its own challenges in a variety of levels ranging from geopolitical changes, cultural upsets and economic hiccups. But the thinking is that we have had a long time to be prepared for this knowledge. The 2012 National Geographic poll stated that 70 percent of those polled thought the government was hiding what it knows about UFOs and extraterrestrials. Disclosure in this context would be a good thing, especially when you consider we’ve been told there’s no such thing as alien space craft and off world visitors for the past 70 years.

So for well over half a century there has been a truth embargo by our government. So a tiny group of people know the truth and don’t feel that the rest of us can handle the truth, as evidenced by the recommendations of NASA’s 1952-1953 Robertson Panel.

The findings of panels and committees from 40 or 60 years ago do not apply now. Our human culture has grown tremendously in that time.

Aliens in the 1940s and 1950s were portrayed as scary, bug-eyed monsters, but these days aliens in movie lore like Star Trek and Star Wars are revered characters. Cartoon renderings of gray aliens decorate common greeting cards. UFO accounts have become intergenerational stories handed down within families. Our society has been introduced to the notion of extraterrestrial life; perhaps it’s time to end the truth embargo.

May President Obama be the disclosure president!

Oct. 25, 2016: At 8 p.m., a resident of Niagara Falls reported a small explosion seen at Legends Park. Hundreds of witnesses heard and saw a bright blue flash from miles away, all the way to Canada.

Oct. 29, 2016: At midnight, a resident of the Bronx reported observing an egg-shaped craft flying through the sky. He said the object had a wobbling motion.