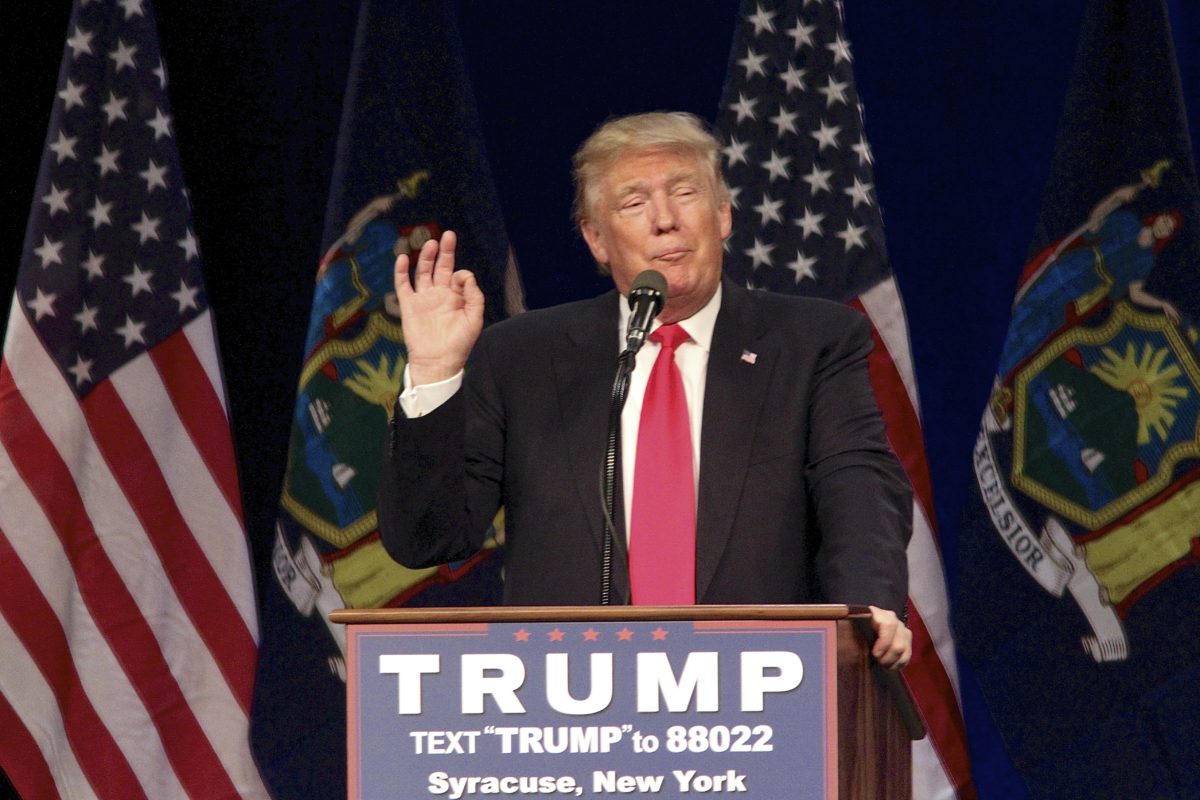 President Donald Trump’s relationship with the rule of law has been, at times, flaccid. But in one tweet he posted last week, he was able to make that relationship hit a new low in a very public way.

Like he has several times in the past, the president criticized his own Justice Department and his own attorney general, Jeff  Sessions. This time it was for advancing indictments against a pair of Republican members of Congress because they are “very popular.”

“Two long running, Obama era, investigations of two very popular Republican Congressmen were brought to a well publicized charge, just ahead of the Mid-Terms, by the Jeff Sessions Justice Department,” the president tweeted on Labor Day. “Two easy wins now in doubt because there is not enough time. Good job Jeff……” 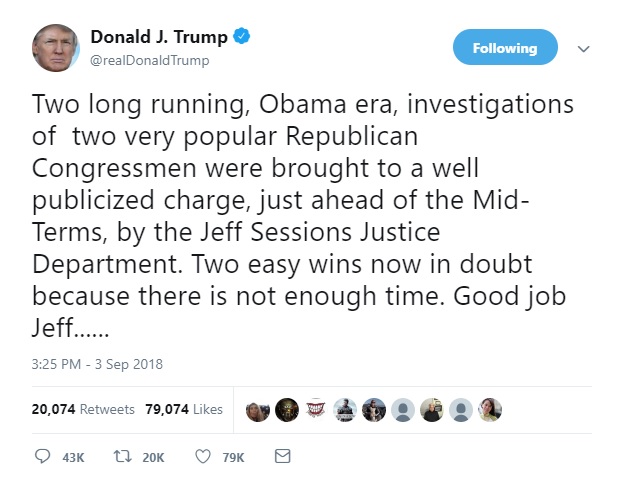 The two congressmen Trump is referring to are Reps. Duncan Hunter, of California, and Chris Collins, of New York, who were both indicted back in August.

Hunter and his wife were charged with wire fraud, falsifying records, campaign finance violations and conspiracy after being accused of illegally using campaign funds to pay for personal expenses, from luxury vacations to kids’ school lunches and delinquent family dentistry bills.

Collins, who represents a swath of western New York from the suburbs of Buffalo to the suburbs of Rochester, was arrested by the FBI for his alleged role in an insider trading scheme. The congressman — a major investor and board member of an Australian-based pharmaceutical company called Innate Immunotherapeutics Ltd. — was charged with engaging in illegal insider trading when he learned a year ago that a new drug for the treatment of multiple sclerosis had failed a clinical trial.

Read: “Chris Collins’ indictment is why politicians shouldn’t be on company boards”

Coincidentally, or maybe not so, Collins and Hunter were both the first and second members of Congress to endorse Trump’s presidential campaign.

It shouldn’t matter, but since the president calls these “Obama-era investigations,” it should be noted that both mens’ charges were actually brought by prosecutors appointed by Trump and the investigation into Collins began during the Trump presidency and is based on an event that happened after Trump was already president.

What actually does matter here is Trump’s raving against the charges and his reasoning for why they shouldn’t have been mounted. Without mincing words, the president implied the indictments would hurt him and his party politically.

With the Democrats hoping to take over the House of Representatives in the midterm elections less than two months away, Collins and Hunters’ seats were both considered relatively safe but now could be in serious jeopardy. Collins won’t be seeking re-election, leaving the GOP scrambling to find a replacement candidate. Hunter is determined to stay on the ballot and still has a good chance of victory, but criminal charges certainly never help one’s chances.

Sorry, Mr. President, but that is not how the rule of law in this country operates. The attorney general does not work for the president, they work for the American citizens. The Justice Department is not intended to be a tool for the president to prosecute their political enemies and protect their friends. The Justice Department does not weigh criminal activity, especially as serious as when it concerns members of Congress, by its potential political ramifications. And the Justice Department certainly does not excuse criminal charges for an individual because they happen to be popular or a Republican.

To suggest otherwise is not the position for a sitting U.S. president — whose oath of office is solely based on upholding the Constitution.

Nebraska Republican Sen. Ben Sasse said it best: “The United States is not some banana republic with a two-tiered system of justice – one for the majority party and one for the minority party. These two men have been charged with crimes because of evidence, not because of who the President was when the investigations began.”

As for Attorney General Sessions, he appears to once again be avoiding the criticism and is continuing to do his job, even if that means indicting two congressmen that the president likes.