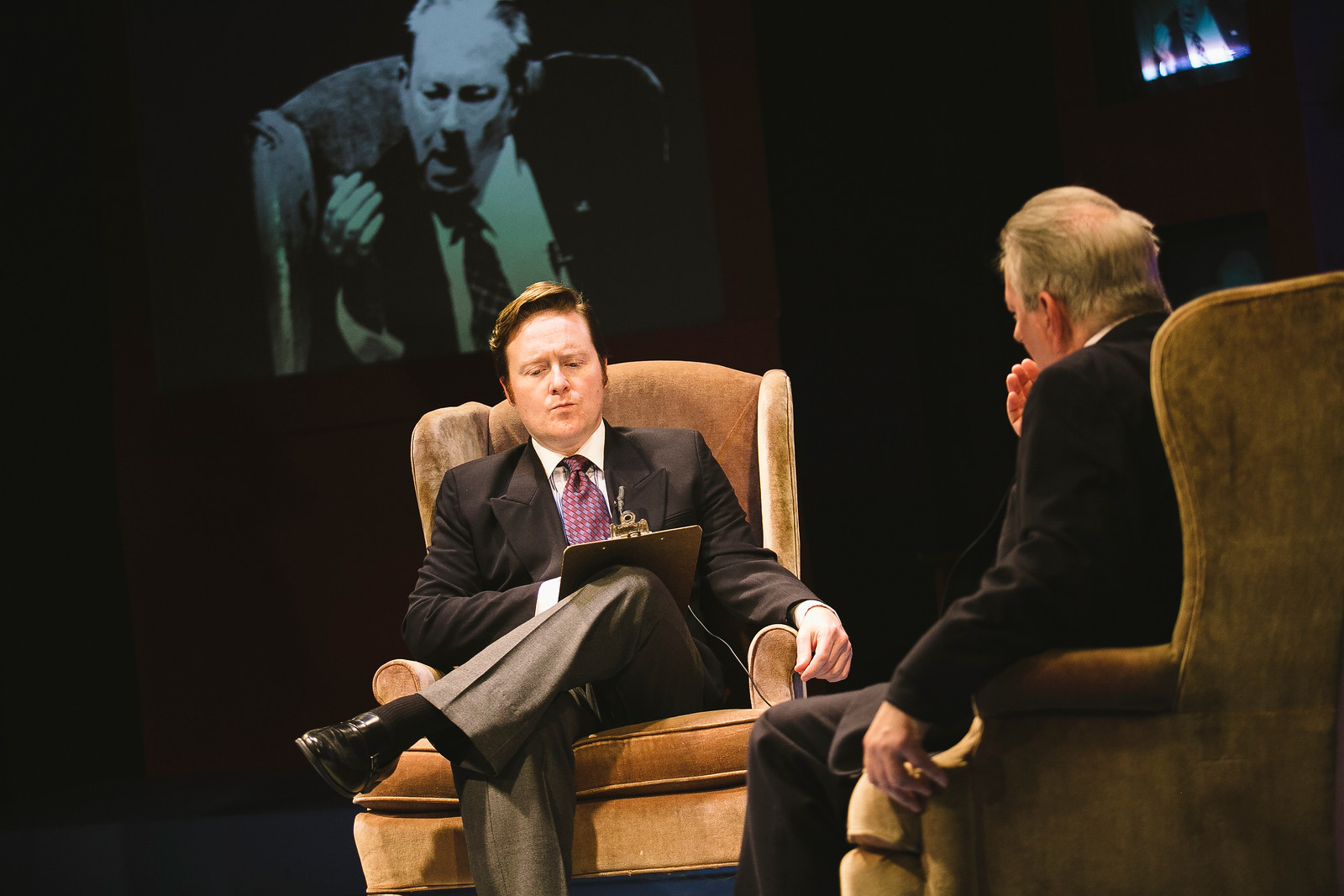 A television show. A stage play. A movie. It’s not usual for a property to be all three of these things, but Frost/Nixon is different.

TV host and sometime comic David Frost recorded nearly 30 hours of interviews in 1977 with disgraced President Richard Nixon to produce a three-part syndicated show that truly made waves, a landmark for the medium. British playwright Peter Morgan produced his stage play Frost/Nixon about how that happened in London in 2006. It is now making its area premiere, running through Saturday, Nov. 18, at Central New York Playhouse.

Director Ron Howard’s film adaptation that appeared in 2008 left out elements that could only work on stage. A live production, as Central New York Playhouse demonstrates, not only delivers a smashing moment of self-revelation, it also inquires penetratingly into the weakness and power of television.

The first striking difference between the play and the movie, which Morgan also wrote, is that more characters speak than the principals. Much of the exposition comes from James Reston (Tyler Ianuzi), a partisan voice of what might pass for the liberal establishment. The program errs in not identifying him as James Reston Jr., whose namesake and father was an iconic liberal journalist of the previous generation. Countering him is Jack Brennan (David Dean), a Fox News-style voice before that network was founded. Both also participate in the action. In Howard’s film the camera is the narrator. This has more the feel of television, where voice-overs are more common.

The two narrators help with playwright Morgan’s task in holding our interest and surprising us when we know what the climax is going to be. It’s also the responsibility of director Justin Polly: Nixon must become a rounded dramatic character, much more than a cartoon of either the left or right.

In responding to this call, Tom Minion delivers one of the most crafted and nuanced performances of his admirable career. It’s just as well that he doesn’t look at all like Nixon because he and Polly have concentrated on the voice, on which they score a direct hit. How many hours did Minion listen to tapes in order to perfect the timber and rhythms?

Yet not too much. Getting too close to the original, as Rich Little used to do, can turn comic. Minion gives us a character uneasy in his skin, wince-making in his disastrous attempts at small talk, defensively loquacious and boring to avoid what he does not wish to say. This is by no means a political whitewash. What Minion does instead is to create a character of dramatic empathy, regardless of what we think of him, not unlike Rigoletto in the Verdi opera or Shylock.

Jeremiah Thompson’s David Frost, in contrast, looks like a character who never had a moment of introspection. Thompson, previously noted for his demonic red beard (1984, Eurydice), had no need to mimic Frost’s speech patterns, as most of the audience has forgotten them. Instead, he gives us a womanizing, vacuous careerist of no discernible political convictions who looked upon Nixon as a rich, exploitable “get.”

Morgan’s text portrays Frost, then only 38, as tumbling into a career fall and in need of reversing his fortunes. Not only was his independent production going to pay Nixon to appear (“checkbook journalism,” then shunned by respectable outlets), but he sought out oily super agent Swifty Lazar (William Edward White, who is excellent, although twice Lazar’s size) to close the deal. The object was not making history but turning a huge profit. And this Frost did. As James Reston says in the play, unlike everyone else, he understood television.

Thompson, never wavering in his Mayfair British accent, gives Frost a vacant, almost harmless smile, as if he were barely paying attention. This is wonderfully effective, especially when after hours of Nixon’s evasion, Frost goes in for the kill. The president fessed up the truth to someone he no longer feared. Let’s forget that the real Frost, his few fans would remind us, was actually a person of more substance who was later knighted.

Technical proficiency helps to make Frost/Nixon an examination of the media as much as it is of presidential malfeasance. Television technical director William Edward White set up banks of monitors on either side of the set so we can see how the narrative in front of us played on the screen. Behind-the-scenes personnel Dan Randall, Rob Searle and Kasey Polly cooperated to rig up massive, 1977-era TV cameras to ensure that the drama before us is an actual television broadcast in the making. SNT

The Curious Incident of the Dog in the Night-Time.
Olympic ski champ reveals Warren Miller movie production tidbits
To Top