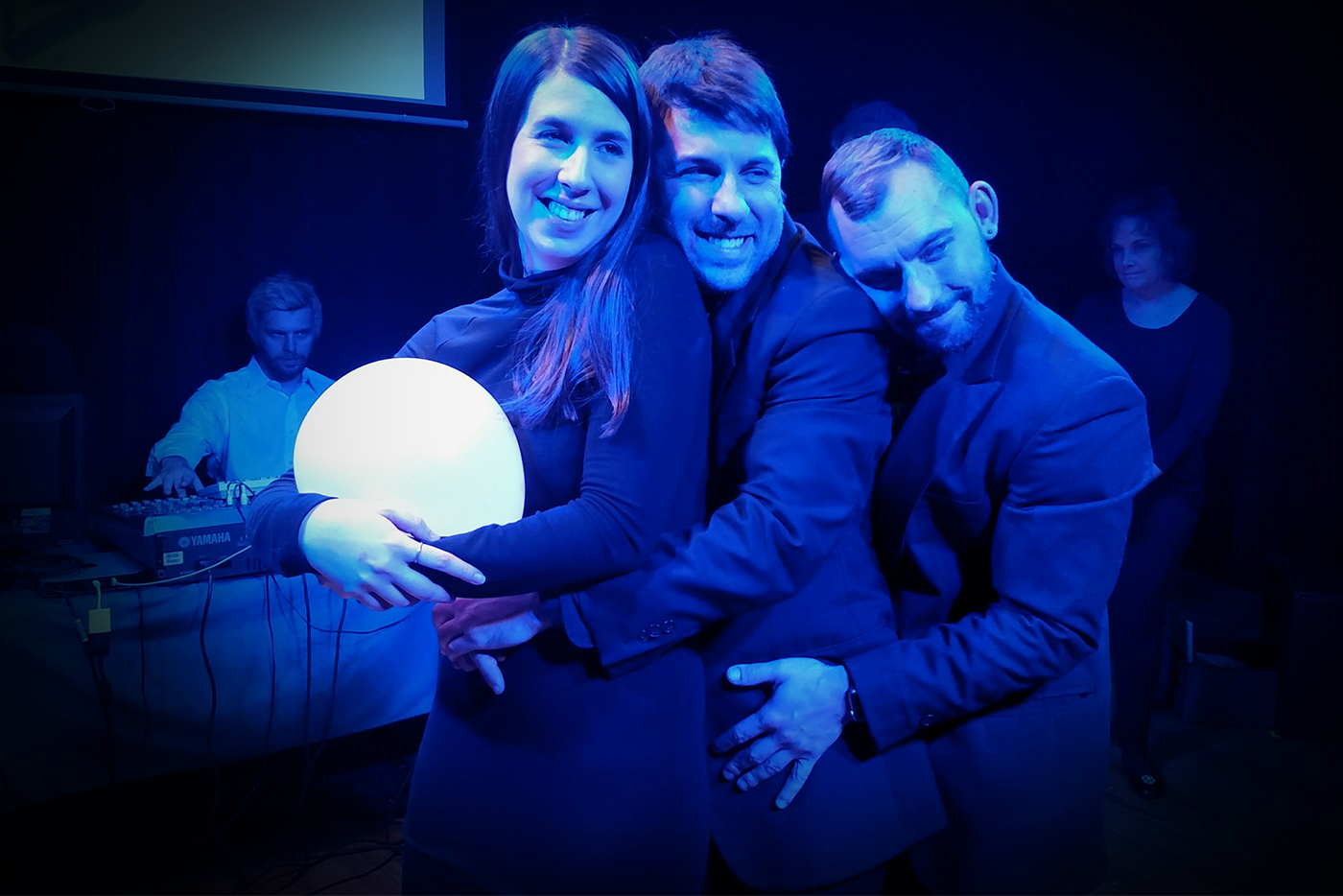 Tom and Katie’s love lives are dissected in “TomKat Project.”

One line occurs again and again in Brandon Ogborn’s uproarious The TomKat Project: “This dialogue is verbatim.” How can we be sure of that? Many lines in the play spoken by the real-life Tom Cruise and Katie Holmes about their abrupt courtship and tempestuous marriage-divorce are public record, either in the press or court records. Rarely Done’s mounting of TomKat Project runs through March 11 at Jazz Central, 441 E. Washington St.

Ogborn’s play is a black, black comedy about living people and their relationship with one of the most litigious entities on earth, the Church of Scientology. You can get away with assigning deranged words to living people if you can prove they actually said it. We may know how the divorce came out, but that does not mean audiences know going in how The TomKat Project will play out.

Received dialogue can be breathtaking. If you are thinking of joining Scientology, you may be asked the following question: “Have you ever made a planet or a nation radioactive?”

Although a staged reading of TomKat Project caused much comment at the New York Fringe Festival in 2013, this is the first live-action production anywhere, a coup for Rarely Done. A team of technicians remain center stage, sometimes flashing up footage of the principals, a nasty challenge for local actors playing roles. Playwright Ogborn writes himself into scenes, not unlike the Stage Manager in Our Town. The consistently amusing Jason Timothy (last seen as the Candelabra in the Redhouse Arts Center’s Beauty and the Beast) thrives on making him engaged, never detached.

Even for people who try to keep the Gosselins and Kardashians out of their consciousness, the outline of Cruise-Holmes events from 2005 to 2012 are inescapable. Actor Tom, nearing 50 but still a box-office champ, had been divorced twice and longed for a female companion. Scientologists, looking upon the actor as their best-known public face, spring into action, reviewing a basketful of headshots of possible candidates.

Some are unacceptable (Greta Van Susteren!) They settle on Katie Holmes, a naïve Roman Catholic from Toledo, who starred on the TV series Dawson’s Creek, and has since endured flop and after flop in the cinema. She is known to be smitten with Cruise, and pliable.

In casting Jordan Glaski and Carmen Viviano-Crafts in the title roles, director Dan Tursi begins with two of the top people in community theater. In some ways, Viviano-Crafts begins with the harder task because Holmes is less known to audiences, who can suffer from the temptation of seeing her as shallow and needy. Clad in a form-fitting black dress, Viviano-Crafts’ Holmes always presents a contradictory subtext when she goes along to get along. Unmistakably ambitious, she uses the Cruise-spouse celebrity to launch her own clothing line.

Glaski, however, gets the heavy lifting. Ogborn’s script deftly allows him a late entrance, the last principal to appear. Cruise is one of the most familiar faces in contemporary America, mostly appearing in screen roles, often of contrasting types.

His best-known YouTube sequence is the infamous jumping-on-the-couch segment with Oprah Winfrey (Michaela Oney). This provides Glaski with his money shot, the single most brilliant moment in TomKat Project. The frenzied grin is both antic and vacant, disturbingly nutzo but somehow unthreatening. He’s meaner and more aggressive shouting down a tongue-tied Matt Lauer (also played by Michaela Oney) in denouncing psychiatry. Elsewhere Glaski uses Cruise’s own words to depict an off-screen persona that’s petulant and mercurial.

Playing characters of any gender, such as Oney handling Winfrey one moment, Lauer the next, is the assignment of the four supporting players who take on 53 characters. Splendid as the leads are, much of the fun in The TomKat Project comes from how these four can stretch. Additionally, hearing different voices and seeing contrasting body sets is a prime argument for why Rarely Done’s fully staged production beats the hell out of a book-in-hand reading.

The object of The TomKat Project may or may not enlighten us about the human condition, but it’s red-hot theatrical entertainment.