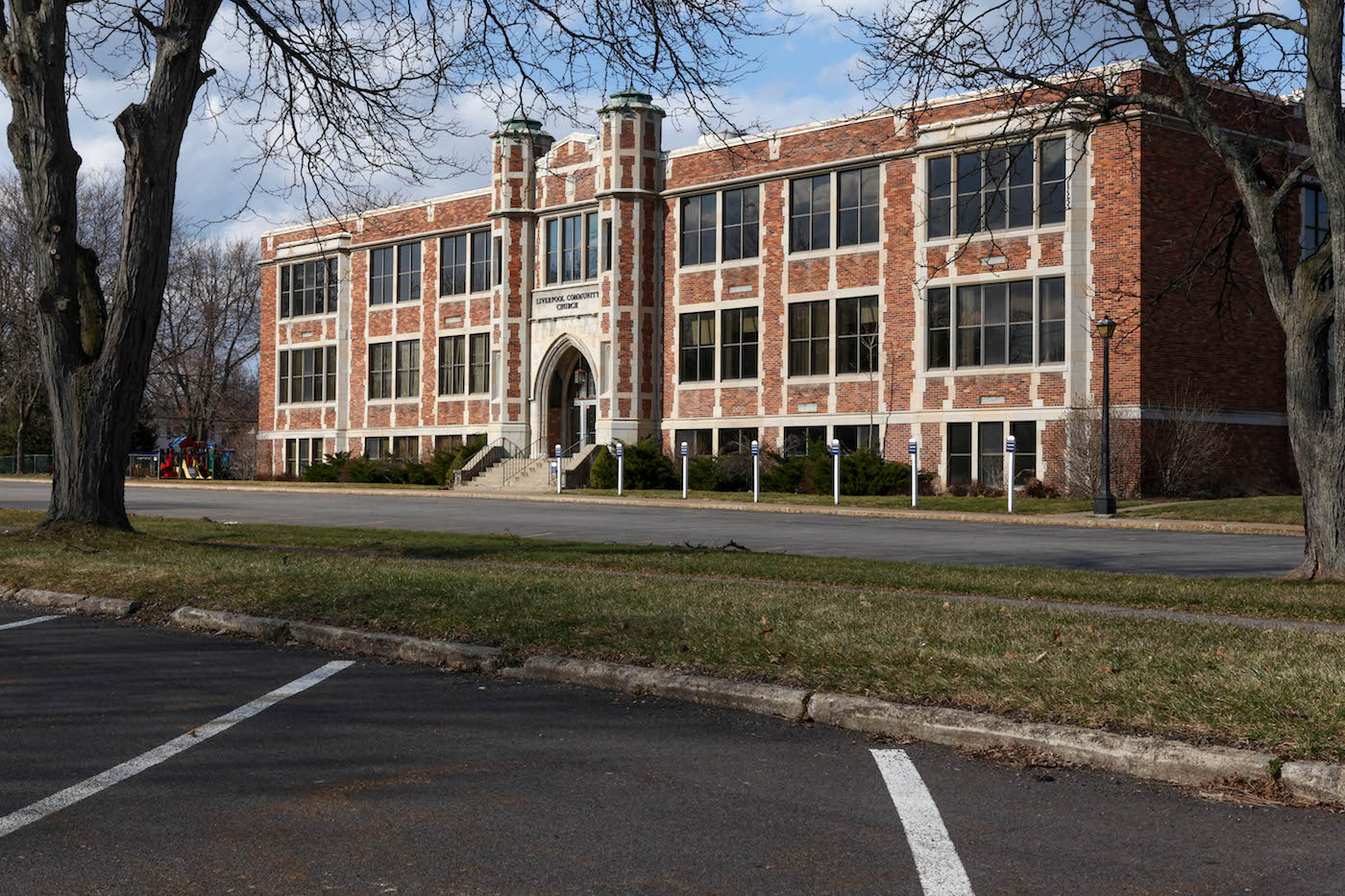 The former A.V. Zogg Middle School in the village of Liverpool is ready for its close-up. Hollywood writer-director Jeremy Garelick plans to transform the 89-year-old building into a movie-based learning facility and studio, which will be known as the Liverpool School of Cinema.

Garelick, 42, has worked alongside directors such as Todd Phillips (The Hangover) and Joel Schumacher (Phone Booth). He also wrote the comedies The Break-Up (2006, with Vince Vaughn and Jennifer Aniston) and The Wedding Ringer (2015, with Kevin Hart and Josh Gad), the latter serving as his movie directorial debut.

Yet the Tinseltown scribe harbors larger ambitions. “One of the things I’ve always wanted to do is teach,” Garelick said. “I’ve taught at UCLA and Yale, and I teach a course in LA about screenwriting every other Wednesday night. I love teaching! And I was thinking that if I could create a hands-on film school, what better place to do it than at an actual school.”

Following Zogg’s closure in 1981, the 97,000-square-foot building served as administrative offices for the Liverpool Central School District for more than two decades. When those offices closed, the Liverpool Community Church stepped in to take ownership for an 11-year run. The building’s selling price was listed as around $1 million in 2014.

Garelick will host a forum to answer questions from the public on Tuesday, March 7, 7 p.m., at the property’s auditorium, 800 Fourth St. (For information, email [email protected] or visit facebook.com/liverpoolschoolofcinema.) “We want to assure the people who live there that we’re not going to be disruptive and we’re going to enhance the town,” Garelick said. “I would be so happy to make a space that the entire community can use. I would love to get a basketball league going, and that auditorium is so great for a church service or theater group.”

Every good script has a beginning, so tell me what’s going on with this project.

It’s something that has evolved from a basic idea probably four or five years ago, and it continues to evolve every day. The beginning of the idea came from my love of high school movies and the John Hughes films of the 1980s, like The Breakfast Club, Ferris Bueller’s Day Off and Sixteen Candles. My college screenwriting professor told me that everything in pop culture runs on 20-year cycles. And then when I graduated from college there was another spike in these high school movies that were very much like the John Hughes movies, so that 20-year cycle concept always stuck with me. So for the past 16 years I’ve been waiting for this next spike to happen and planning for the making of several low-budget high school-type movies in the vein of John Hughes.

I started collecting what I believed to be the best material on the subject matter. People were submitting high school screenplays to me because the studios weren’t making these kinds of movies anymore. Studios are more obsessed with films like The Avengers and Harry Potter; things that really travel worldwide. So I’ve been looking to basically create a high school universe much in the same vein of the Marvel superhero universe. 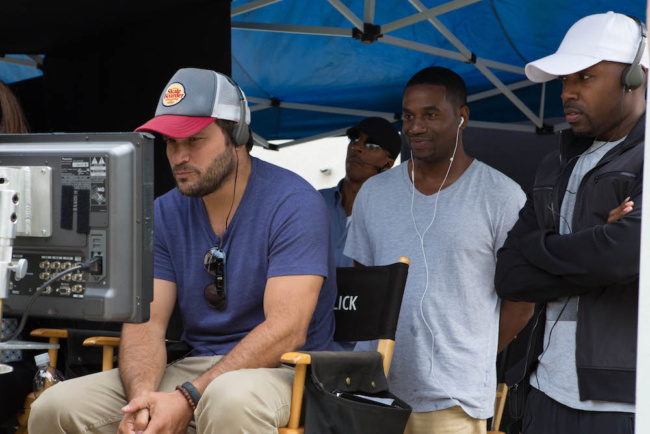 Writer-director Jeremy Garelick on the set of The Wedding Ringer.

For about three years or so I’ve been looking for a vintage high school to create this space where we can make these films. I was searching in Detroit, in Louisiana, in Georgia, places that have tax credits and tax rebates. I had another movie that I was producing that I went out for financing, and I spoke to producer Josh Crook, who is Ron Perlman’s partner (with Wing and a Prayer Pictures), and he said, “Would you be willing to shoot it in upstate New York?” And I said, “Just out of curiosity, why?” And Josh said, “Well, there’s a 40 percent tax credit and a 45 percent post-production credit,” and I said, “Wow, yeah, that’s amazing.”

And I was also very curious as to why nobody in Los Angeles really knew about this tax credit. It wasn’t really publicized in LA because everybody goes to Georgia and Louisiana and Canada or Massachusetts or Detroit. And Josh said that the infrastructure isn’t up there yet to make these films on a big level, and there isn’t really an A-list crew (to handle the behind-the-scenes work).

So I literally got off the phone with him and started Googling “schools for sale in upstate New York.” And it just so happened that there was one for sale in Liverpool. My wife’s entire family is from Syracuse and I’m from Rockland County, so I’ve been up there a number of times for weddings and to visit grandmothers. So I called our cousin and I asked, “Have you ever heard of Liverpool?” And he said, “I’m literally in Liverpool right now: I work here.” So I got on a plane and came out there to see the school and it was exactly what I was looking for.

So we started going to local colleges and universities– we’ve gone to Onondaga Community College, Le Moyne College, Syracuse University–and trying to partner with them and give students the opportunity to work or to intern at the school, or to take classes.

I’ve also been able to partner with a lot of A-list producers, directors and writers who will come out to Liverpool for guest lectures. All of my crew members, from directors of photography to line producers to art and production designers, have already agreed to be teachers while they are working there. So I’m building a great hands-on film school that will give local people an opportunity to learn how to make movies, and hopefully not have to leave Syracuse but can stay and work from here.

All a place really needs is the (filmmaking) experience because once you have that experience, you can do anything, You go down to Georgia or Louisiana or Jackson, Miss., you’ve got all these local people who can really match the crews in Hollywood because they’ve been doing it now for several years. That’s really the goal: to create an infrastructure up there. And my hope is that by the time it hits that four- or five-year mark, there’s a thriving film industry up there.

What did you learn from filmmakers like Joel Schumacher and Todd Phillips?

Well, Todd was sort of mid-career for me. I started out as an assistant at Creative Artists Agency, CAA, which at the time was the biggest agency in the world. CAA represented Steven Spielberg, Tom Cruise and Brad Pitt, and it was the epicenter of the movie industry, and you learned exactly what went on behind the scenes, how the films got made and distributed. That was quite an amazing learning experience.

And then I went to work for director Joel Schumacher’s Tigerland, which was Colin Farrell’s first movie, and what I did was carry his water bottle and held almonds for him in case he got hungry. But that was the best film school out there because I learned so much, and on the first day I’m watching Joel and I said, “This is what I want to do: I want to be a director. I was his assistant for four movies: Tigerland, then Phone Booth, Veronica Guerin with Cate Blanchett and Bad Company with Chris Rock and Anthony Hopkins. We shot in Dublin, London, Prague, New York City, and I learned so much just being on his set.

And from there I sold my first screenplay (then titled The Golden Tux) to Todd Phillips. I wrote it for Vince Vaughn, who read it and he pitched The Break-Up to me to write. Then after that Todd asked me to do the first Hangover movie with him; we took the original script and we Page One-d it and rewrote it. I learned so much from Todd: directing the actors, working with the crew, and he’s truly one of the funniest people I’ve ever met and he’s been a great mentor for me. Then I had the opportunity to direct my first movie, The Wedding Ringer with Kevin Hart and Josh Gad, which was the Golden Tux script that I originally wrote for Vince Vaughn. (Laughs) I’m going to direct a musical for Universal with Josh Gad, with music by Alan Menken and Steven Schwartz, so that’s most likely going to be my next movie.

Would you relocate your family here?

Yes. My wife is incredibly thankful because both of her grandparents are here and she’s got uncles, aunts and cousins that are right around the corner. We’re looking at houses, and I really want to move close to a lake, that’s my goal. And I love that Liverpool is close to a lake.