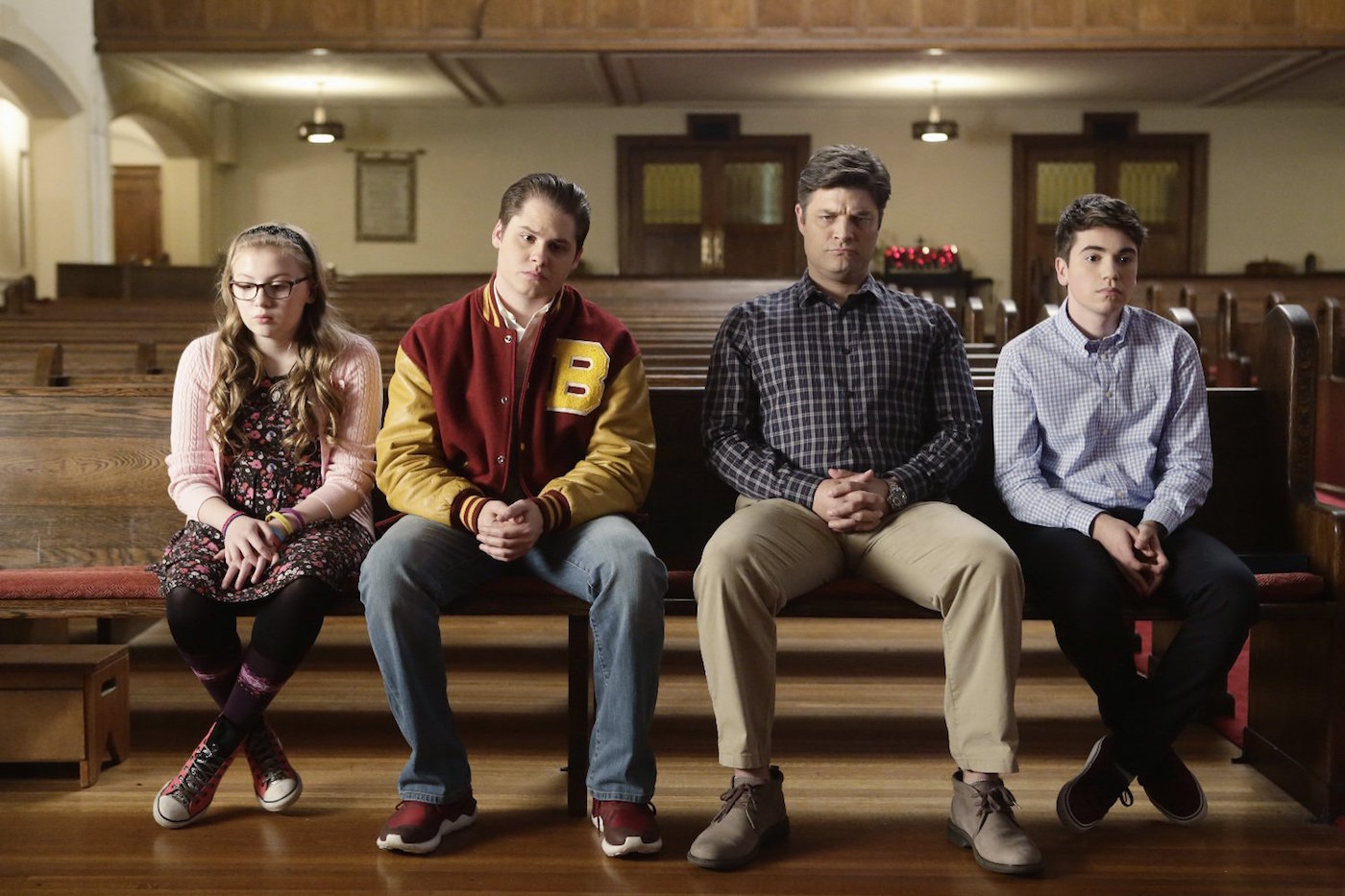 There are few things the Irish and Catholic love more than a well-appointed nativity scene and poking fun at their own religion. I was raised both Irish and Catholic, and although I’m only one of those things now (you can guess which one), I still have lingering affection for the sometimes wacky culture of Catholicism.

When you Google “growing up Catholic,” you’ll find dozens of listicles full of memories and feelings that all Catholic-raised kids can recall, like explaining to friends why you have smudged ash on your face; wearing a hideous mini wedding gown for your first communion; and that special feeling you felt when you were actually hit with holy water during the priest’s blessing.

The first four episodes of The Real O’Neals — the newest Modern Family clone from ABC — have been a rollicking, light-hearted jaunt through some of these inside jokes. But unsurprisingly, ABC went straight for the throat, tackling some of the stickiest subjects for Catholics: sex, divorce, being gay, and the ever-present struggle to be the perfect family.

The Real O’Neals’ protagonist is Kenny O’Neal, a gay teen who accidentally comes out to his entire conservative Catholic community at a church function. The show is executive-produced by and loosely based on the life of Dan Savage, the author and syndicated advice columnist whose frank discussion of sex and LGBT issues have in many ways changed the conversation about being gay in the United States. Savage and his husband started the It Gets Better Project. The Real O’Neals, it seems, is a new way for Savage and his collaborators to shine a spotlight on one person’s LGBT experience. So far, that spotlight is bright. And shiny. And delightfully gay.

The O’Neals are a quirky family of devout Irish Catholics who are also — you guessed it — real. Despite Eileen’s efforts to force her family into the mold of the idyllic Catholic family (God-fearing, high-achieving, family-oriented, morally righteous), we learn in the pilot episode that Kenny is gay, Jimmy has an eating disorder, and Shannon has been stealing the money she raised for African orphans. The true zinger? Eileen and Pat are getting a divorce. Cue a dramatic take to the camera. This is going to be good.

Throughout the next two episodes, Eileen tries to “fix” her family. She makes her anorexic son a healthy meal and that seems to solve his anorexia. Evidently, we will not get a frank discussion of eating disorders here, and that’s a real bummer. She forces Shannon to atone for her sins by winning a blue ribbon in the school science fair — a call Shannon answers by presenting evidence against the existence of God. And, like a good Catholic, she ignores Kenny’s revelation, preventing him from coming out to his girlfriend and instead encouraging him to have sex just so he can be sure he’s not straight. Meanwhile, Pat “yes dear”s his way through Eileen’s Catholic mania and does his best to support his children. He’s a doormat, but he’s a good dad.

By the end of episode three, Eileen has begun to come to terms with her imperfect family, and everyone can move on with the business of life. But that doesn’t mean the challenges are behind them. If the last 30 years of family comedies have taught us anything, it’s that the business of life is hilarious.

When you boil the show down to its bare bones, it is yet another (not as great) Modern Family clone. There’s the type-A mom, the doofy but loving dad, the intellectually-challenged but goodhearted child (Jimmy on The Real O’Neals, Haley and Luke on Modern Family), and the too-smart-for-her-own-good daughter. (I believe Shannon O’Neal and Alex Dunphy are, in fact, the same person living in two different universes.)

Kenny is the only character who doesn’t have a direct parallel among the Dunphys. He is also the standout star, and clearly it is his story that matters most to the writers of this show. Savage’s familiar snarky wit is all over the dialogue, especially in Kenny’s dry voiceover. Newcomer Noah Galvin brings the young Kenny to life brilliantly; this is exactly what you would imagine Dan Savage was like as a kid. Galvin is certainly one to watch, and it is his performance and character that will keep me coming back for more.

The Real O’Neals isn’t perfect, but the bar is high and the show is still in its infancy. In time, just as we did with the Dunphys, we may fall in love with the O’Neals — another kind of modern family.

The Real O’Neals airs on ABC Tuesdays at 8:30 p.m, and each episode is available on Hulu Plus the next day.