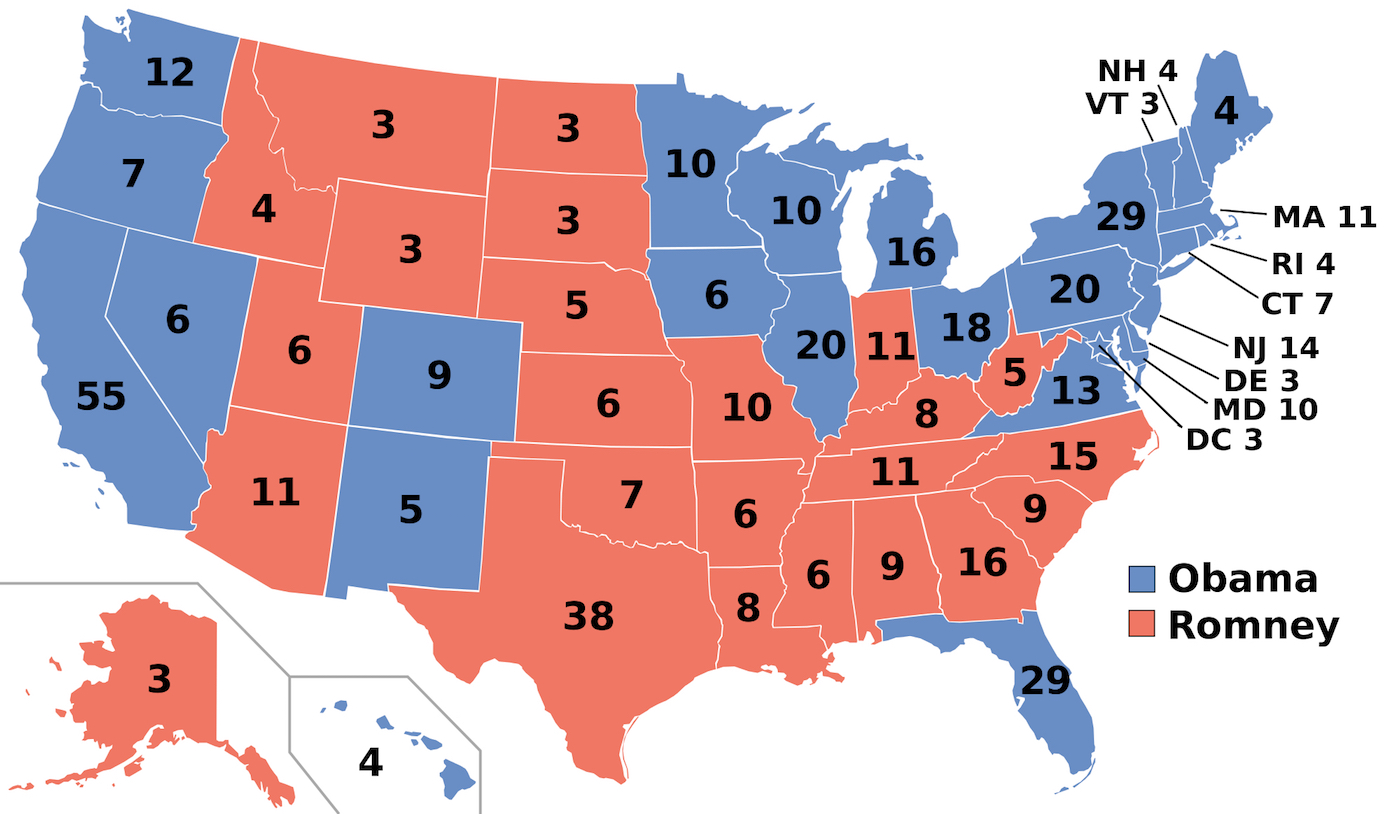 The electoral college vote is the next step in the race to the White House.

More often than ever it seems, the 2016 presidential candidates love to reference national polls saying how well they do against the other in head-to-head contests.

But we all know national polls don’t matter in the slightest. It is the Electoral College and nothing else that determines the president. And while Hillary Clinton and Bernie Sanders are still technically fighting for the Democratic nomination, both Clinton and Donald Trump have begun turning the page from the primaries and looking toward that crucial electoral map. But what exactly are they looking at?

The Electoral College has been pretty stationary for some time. In the last 16 years, only ten states have changed from blue to red, and vice versa, at least one time. Essentially, we’ve been in a period where Nevada, Virginia, Ohio and the infamous Florida are the only states we can’t be sure of.

Barack Obama is only the fourth Democrat in the last hundred years to win a second term — winning more than 300 electoral votes both times — far passing the 270 needed to win. Whereas geography has benefited the Republicans the last few decades, lately the Democrats have had the advantage, thanks to demographic changes and reliability on minority votes in largely populated states. Indeed, even without the swing states of Nevada, Virginia, Ohio or Florida, the states Democrats can unmistakably win tally up to 266 — only four away from what’s needed. So a Democrat only needs to win one battleground state and they’re in the White House. The good news for the Democrats is that they won all of the swing states, both in 2008 and 2012.

As comforting as that is, Democrats in 2016 are going to be on the defensive, doing what they can to protect those crucial territories. After all, they’ve won Ohio by only a few points in recent contests and Obama won Florida by only two points in 2008 and one point in 2012. Recent polls show Trump and Clinton virtually tied in both those states. The Democrats are also fighting for a third term in the White House — something that history has shown is extremely difficult to do. Obama faltered a little in 2012, where he won all the states he won in 2008 minus Indiana and North Carolina — which are probably firm red states in 2016.

So with those liabilities, the Democrats are looking elsewhere to possibly overturn a traditional Republican state. The Clinton campaign has begun targeting Georgia — hoping to capitalize on her popularity with African Americans to tip the scales. Though a long shot, her husband did pull off a win there in 1992. The only other Democrat who’s won Georgia since 1960 has been Jimmy Carter — who was governor there.

Clinton has also eyed Arizona, hoping that the growing Latino population can turn it blue like they did in neighboring New Mexico. However, it’ll probably be a few more elections before Arizona can be seriously considered in play. Then there’s her old home place — Arkansas — where Bill Clinton was governor. He won the state in 1992 and 1996 and the Clintons remain a popular powerhouse there.

Alright, what about the Republicans? It’s been eight years since they’ve held the White House and George W. Bush would’ve lost in both 2000 and 2004 if any single state he won had voted otherwise. They’ve also lost strongholds in Nevada, Virginia and New Mexico in the last decade. They’re on the offensive now. Trump is going to put a lot of energy into the usual swing states as expected — particularly Ohio, and Florida — which he considers his second home.

But Trump will likely go where no Republican has gone before — or at least not recently — and that’s the Rust Belt. Trump’s focus on trade deals has struck a chord with a lot of blue collar voters in that region who have watched factory jobs leave over the last 30 years, drying up the region’s economy. For years, Republicans have suggested they could put Pennsylvania, Michigan and Wisconsin back in their column — which is just plain fantasy. None of those states have voted for a Republican since the Reagan administration. However, Trump is the candidate who can actually make it possible, no matter the odds. Trade could be the item that makes the Democrats come running back to defend their Midwest firewall.

With his New York ties, Trump has also said he could put the Empire State in play, a state that hasn’t voted Republican since 1984. As one of the most liberal states in the nation, it seems nearly impossible, but Trump has been underestimated before. He would have to make quite the case. The billionaire is also looking toward Bush stronghold New Hampshire.

Nothing can be set in stone, however. There is a lot of time between now and November for things to happen that could change the race. But by all counts, the preliminaries are over. The state-by-state tactical battle has begun. The road to 270 is now open and it’s most likely going to be a long and bumpy ride.