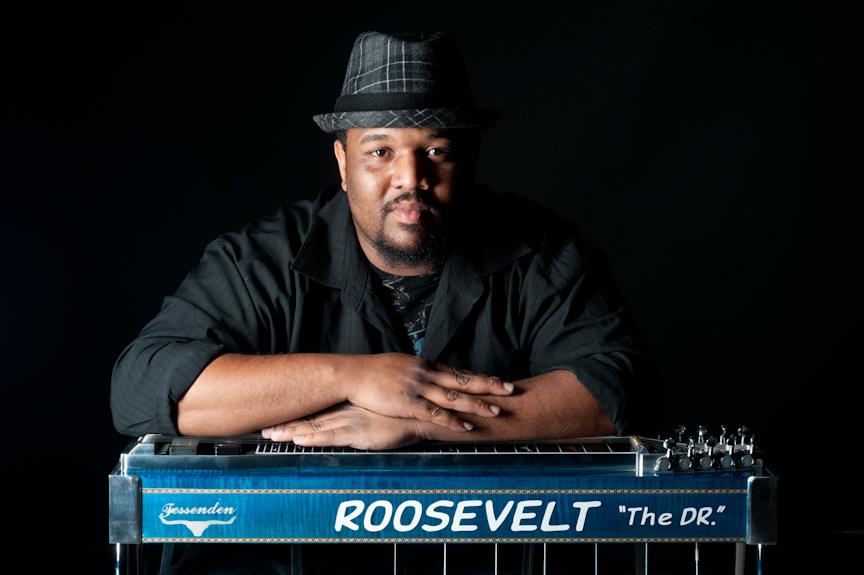 Roosevelt “The Dr.” Collier is bringing his talents to Funk ‘n Waffles Downtown.

Miami native Roosevelt “The Dr.” Collier is bringing his “Get Down” tour to Syracuse, and he promises to bring the funk, too.

The pedal steel guitarist learned his craft playing with his family band, The Lee Boys, at their House of God church in Perrine, Fla. They play out of the sacred steel tradition of the 1930s, when the steel guitar blended with gospel and became a staple in a branch of southern Pentecostal churches. Funk, jazz, blues, hip-hop and country add to their signature sound, and Collier is known as a guru of the craft.

The 32-year-old has shared the stage with notable artists such as Karl Denson, Umphrey’s McGee and the Allman Brothers Band. His New York touring lineup packs a musical punch with Taylor Shell and Mikey Carubba of Turkuaz, and Eli Winderman and Rob Compa of Dopapod.

“Let’s call them superheroes,” said Collier of his tour mates. “They are just very professional players. We’re all good friends.”

In 2016, he’s already played in Colorado and California. In his first Empire State tour, he’ll start at the Hollow Bar + Kitchen in Albany on Wednesday, March 9, followed by Buffalo Iron Works in Buffalo on Thursday, March 10, and finally back to Syracuse for the Friday, March 11, show at Funk ‘n Waffles Downtown.

Collier is working on two albums set to be released in 2017: a solo album and a partner project with bluegrass-acoustic dobro player Andy Hall from the Infamous Stringdusters. (“Dobro” is both a generic title and brand name describing the design of a resonator guitar, which is sometimes played on the lap like a pedal steel guitar.)

The purveyor of sacred steel has a message for Syracusans: “Let the funk be with you,” the Dr. said, “because it’s going to get funky in Funk ‘n Waffles.”