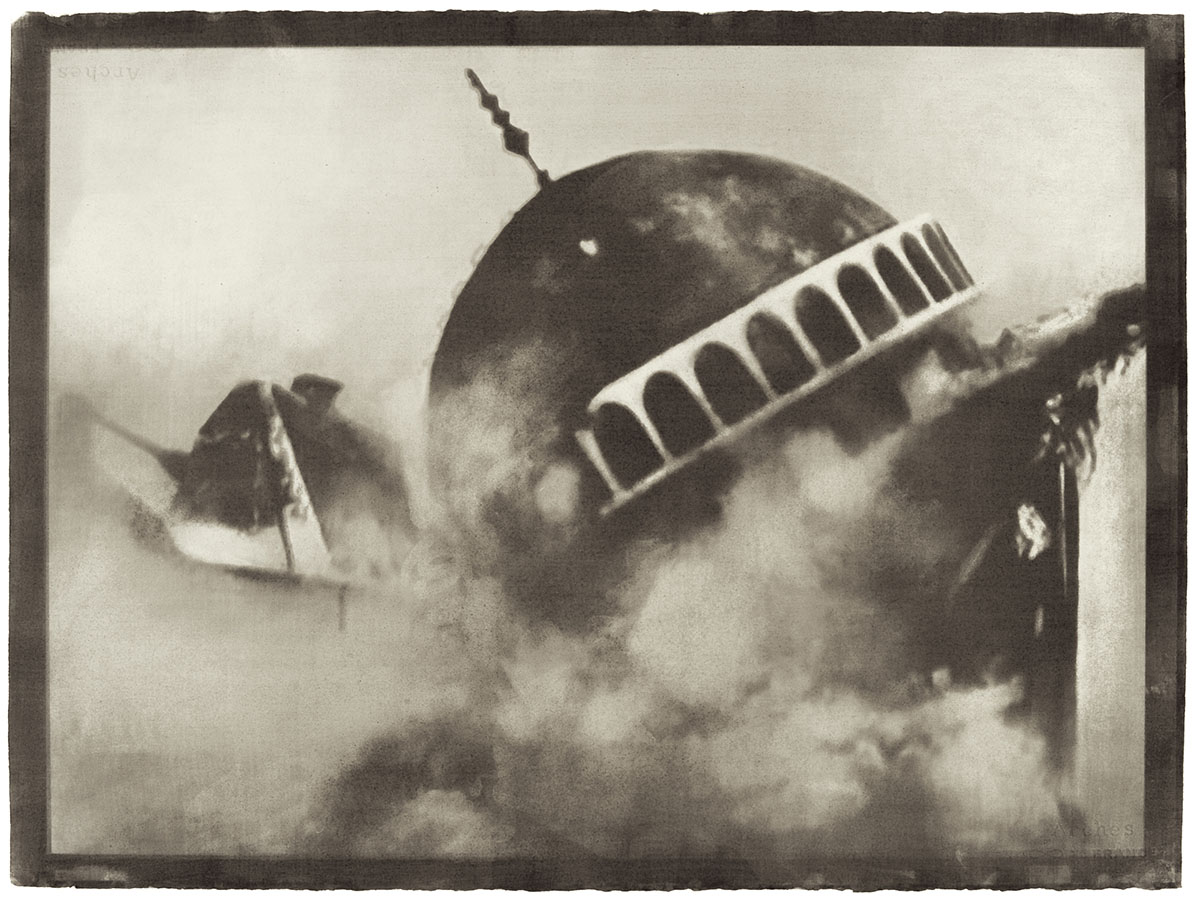 In the course of her artistic career, Justyna Badach has photographed and critiqued landscapes, delved into male culture, and examined how Hollywood’s Westerns portrayed the American West. Her new body of work, Land of Epic Battles, is a series of handmade, dichromate prints that use film stills from ISIS training videos. The first solo exhibition of that work is on display at the Light Work gallery on the Syracuse University campus. 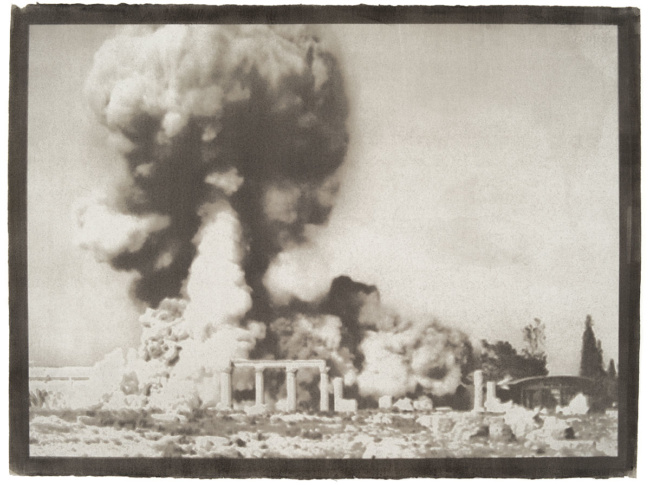 Badach has appropriated and recast the videos, editing out overt, brutal imagery of beheadings, crucifixions and executions carried out by soldiers. She also experimented with darkroom techniques before choosing a process using gunpowder as a pigment. And she utilized heavyweight watercolor paper. The 15 prints look gray, almost archival, as they provide a different context for what appeared in the ISIS videos.

In an untitled video still, a massive plume of smoke rises toward the sky, but it’s not possible to see the buildings that were blown up. In another, a rocket heads skyward; it’s difficult to see the men who launched it. In a third, a lone car is on a road, seemingly connected to no one. In reality, it’s packed full of explosives. A fourth, set in a desert setting, depicts figures who are barely recognizable. They are ISIS captives being marched off for a group execution.

All four prints focus on landscapes, on territory with historical and cultural significance. At the same time, the artworks aren’t suggesting that violence can be wiped away; it remains a reality just as gunpowder remains an element in the prints.

Badach says it’s simplistic to conclude that ISIS is on the ropes because of a series of defeats in Iraq during 2017. She emphasizes that ISIS is a transnational organization with financial, logistical and technological resources. This winter, ISIS forces have trained in Afghanistan and carried out raids on varied targets.

The Light Work exhibit poses a key question indirectly: Why do men from around the world join ISIS? Before she started working on Land of Epic Battles, Badach spent hours viewing ISIS videos. She was struck by the videographers’ technical sophistication, by their use of visual language borrowed from Western media, by voice-overs promising power, respect and camaraderie.

She asserts that ISIS propaganda comes in a hyper-masculine package designed to appeal to people who are culturally and socially isolated. In the 21st century, tribalism is a potent force.

This exhibition has its own identity yet also connects to Badach’s past work. She has made artworks dealing with Hollywood’s glorification of violence, documented landscapes in the Middle East, Croatia’s Dalmatian Coast and other locales, and created Bachelor Portraits, a series utilizing text and images to explore living spaces for men who live alone. Her work has been displayed at the Catherine Edelman Gallery in Chicago, the Corcoran Center in Washington, D.C., and the Art Wonderland Space in Copenhagen, Denmark.

Badach will be feted at a reception on Thursday, Feb. 1, 5 to 7 p.m.; her gallery talk begins at 6 p.m. Both events are free and open to the public.