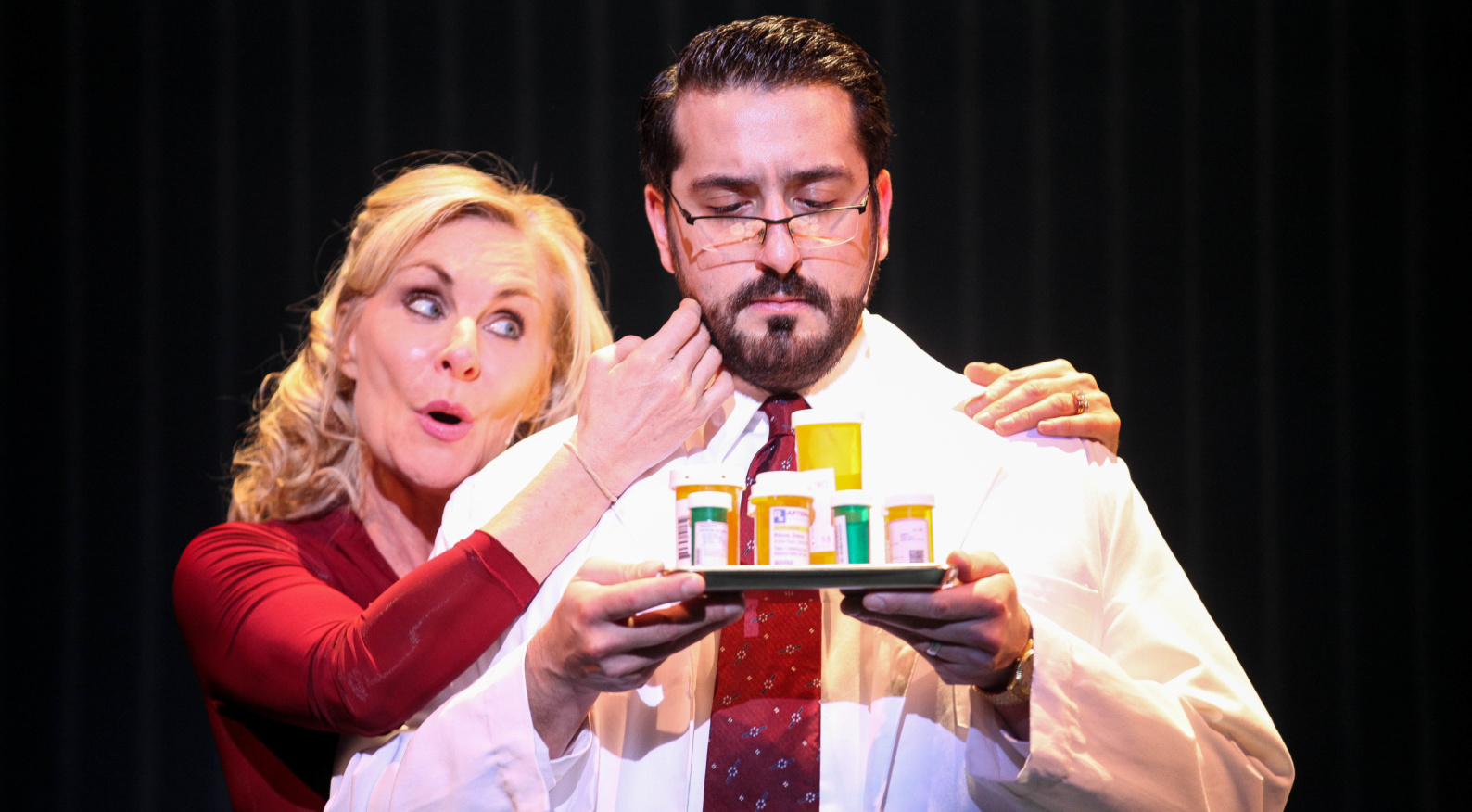 Although Tom Kitt and Brian Yorkey’s Next to Normal is not usually spoken of next to box office smashes like Wicked, it may well be the landmark musical of the 21st century. It nudges the form of the genre onto new ground. A third-generation rock musical, Normal, which runs through Feb. 11 at Syracuse Stage, begs comparison with the ambitious harmonies and juxtapositions of Jason Robert Brown (Parade) or Stephen Sondheim, only younger and hipper.

Diana Goodman (Judy McLane) suffers from a cascade of mental disorders that raise ethical concerns and deeply affect all the members of her household. We see everything through her eyes, an invitation to empathy. It’s a major disorientation to learn that not everyone she’s been talking to is actually there, or at least visible to the rest of the household.

Next to Normal’s complicated production history and significant awards allow it to walk in on a carpet of legend. Kitt and Yorkey had workshopped Normal for 10 years before it made a big splash off Broadway in 2008, followed by a move the next year to Broadway, winning both a Tony Award and a Pulitzer Prize. A program note reminds us that only nine musicals have shared a Pulitzer in 85 years. There have been dozens of regional productions, including two local mountings, before director Hupp arrived in town. He gives every indication of wanting to put his own stamp on this one.

Judy McLane as Diana is no wounded butterfly or hothouse flower. Her bio cites 4,000 performances in productions of the ever-sunny Mamma Mia! Her robust resilience carries us along. Such a healthy specimen looks the least likely to be losing her mind.

From her opening speeches, Diana is candid and abrupt. We see her waiting up for her late-arriving son, Gabe (Josh Tolle), a spirited boy in an athletic jacket, while in another room she’s comforting her anxious and overachieving daughter, Natalie (Sara Masterson). Diana speaks of having sex with her offstage husband, Dan (Glenn Seven Allen), as an obligation, prompting Natalie to respond, “I wish you hadn’t said that.”

When we meet Dan he appears to be supportive and smiling, and together they accept their routine in “Just Another Day.” That routine leads Diana to prepare sandwiches for school lunches, but in her exuberance she lays all the slices of bread on the floor.

Meanwhile, Mozart-playing Natalie attracts the attentions of a scruffy-looking admirer, Henry (Tyler Fauntleroy), whom she dismisses as a “pretentious stoner.” He soon negotiates a kiss, within Diana’s sight, reminding her of her own emotional loss that she sings of in “I Miss the Mountains.” And Henry is indeed introducing Natalie to controlled substances; he reminds her that her devotion to Mozart binds her to strictures denying improvisation.

Recognizing the seriousness of the sandwiches-on-the-floor episode, Dan drives Diana to meet psychiatrist Dr. Madden (Matt Ban), who furnishes the exposition that Diana has been suffering from bipolar disorder linked to repeated hallucinations for 16 years. The psychiatrist’s recommendation is to increase Diana’s medications until she says she does not feel anything, at which point he can declare her “stable.”

“Madden” might be a perfectly honorable family name, but it’s darkly ominous for a shrink in this musical drama. Later, when she is alone with her trusted son, Diana follows the suggestion of flushing away all those brightly colored medications.

This leads into the most startling scene in Next to Normal. Anticipating a happy birthday party, husband Dan looks forward to the occasion with one of the show’s brightest numbers, “It’s Gonna Be Good,” until a breath-stopping reversal changes everything. This is where believing Diana’s lying eyes have led us.

A second opinion from the promisingly named Dr. Fine (Matt Ban again, with a different accent) is anything but reassuring, however, as he concludes that Diana’s condition is “chronic, like diabetes.” The prescription is electric shock therapy, only 100 volts with “some memory loss.” When Diana balks at sticking with the treatment, drawing Natalie’s criticism, the mother responds with one of the most wrenching numbers of the show, “Maybe (Next to Normal).”

Where Hupp looks his best, however, is in the mastery of the elusive tone of a rock musical about dreading madness. There are moments of lightness, even comedy, in a riff about drugs that alludes to “My Favorite Things” from The Sound of Music. But the moral weight of grasping the suffering of a mortal is always central.

All Poets & Heroes. Where We Lived and What We Lived For (independent)
Taking Artistic License From Disturbing ISIS Videos
To Top