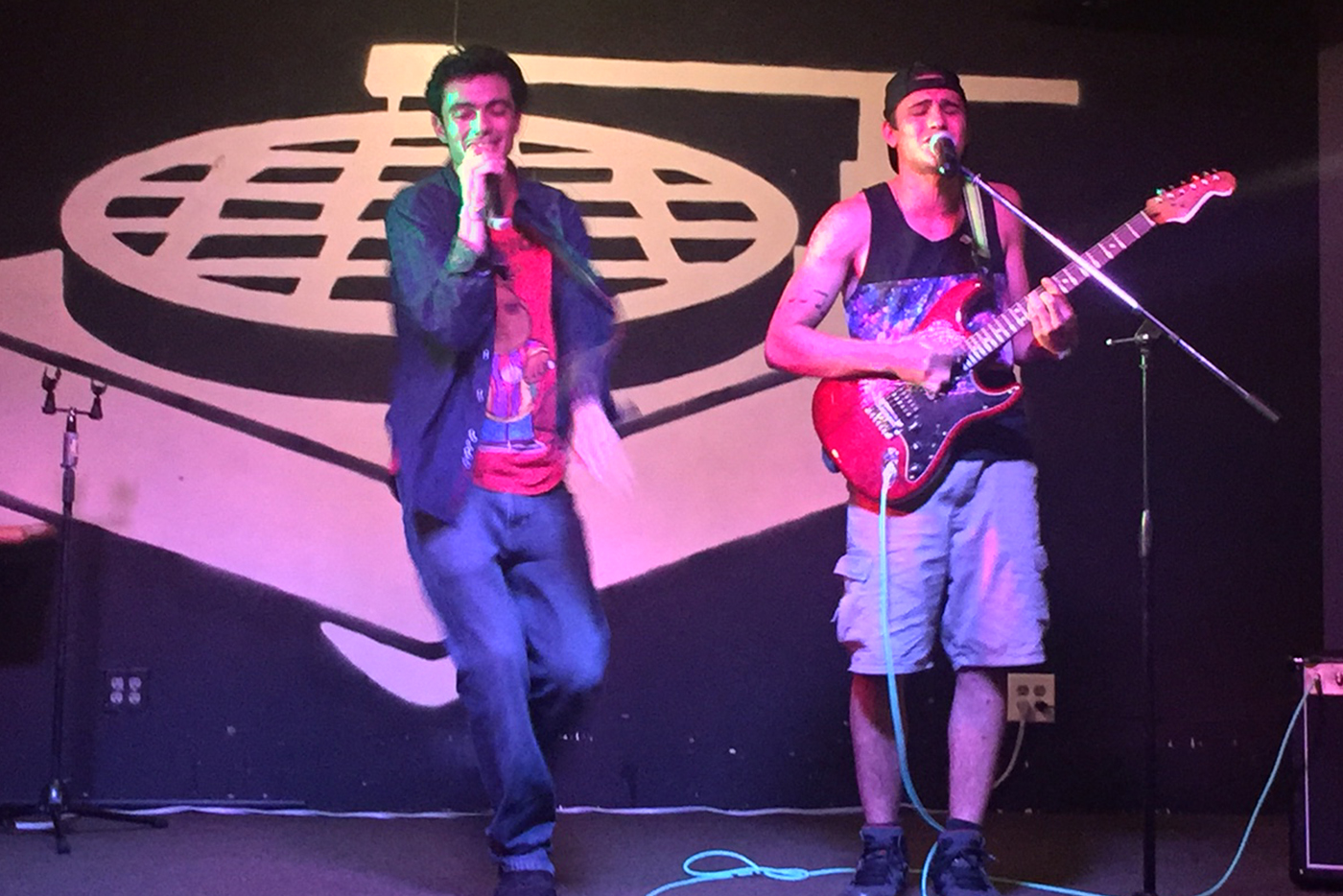 Lack of knowledge of hip-hop in Syracuse causes venues to shy away from booking the genre.

Outside the basement location of Funk N Waffles, tucked behind the busy Marshall Street corridor, a diverse group of young men gathered. Cigarette smoke wafted through the cool summer air, along with laughter and the faint bump of beats below. A few crowd members snapped pictures in front of the graffiti adorning the otherwise nondescript alley.

The modest crowd had come for the second summertime installment of Hip-Hop Saved My Life, a performance showcase for Syracuse hip-hop artists to share their craft. Underground both literally and figuratively, it was hidden in plain sight, much like the culture that birthed the art form.

The history of hip-hop within Syracuse is deep-rooted. During the golden era of the early 1990s, the city hosted shows for legends of the culture including Public Enemy, Gang Starr and Big Daddy Kane. Even the coffin of the late Biggie Smalls was built by the now-defunct Marsellus Casket Company, according to records from the Casket and Funeral Supply Association of America.

Syracuse, despite its size, has cultivated a strong local arts scene, giving musicians platforms to showcase and grow their audience. The city is home to acts such as Sophistafunk, whose fusion of live funk and hip-hop have landed the trio on the national festival circuit. Hip-hop, however, remains on the fringes of the Syracuse music scene and many artists feel a level of discrimination exists from those outside the hip-hop community.

“When you go to a different city or different state, everyone shows love; when you’re here, everyone’s hating,” said local rapper Brandon “B Gates” Gaeta. “The Syracuse scene is low. We need more venues to show love for hip-hop. It is a prejudice at the end of the day. A lot of these venues aren’t open to hip-hop.”

That prejudice Gaeta speaks of is the perception of hip-hop as violent. Historically and still today, mainstream hip-hop artists have featured lyrics that invoke rape, drug use and gun violence. But other artists whose material focuses on world politics, social issues and advocating equality and community spirit are forced underground, relegated to the sidelines.

This lack of knowledge of the diversity in hip-hop, and thus the misperception that all hip-hop is violent, causes venues to shy away from booking the genre. Still, many artists in the city are working hard to change that view by pushing music with a more positive message.

Xavier “Exoticz” Sanchez is a founding member of Last Hope Entertainment, a collective of hip-hop artists promoting a message of peace, unity and personal freedom. “We preach and stand for a message of positivity and that’s what I want to get out to other people,” said Sanchez, a lifelong resident of the Syracuse area. “One person can make a difference and it all starts with making that conscious choice to be the change you want to see in the area.”

Last Hope Entertainment’s movement of positivity has worked to unite the local hip-hop community through curating events like the Hip-Hop Saved My Life series, which showcases the diversity of talent within the city. Shows can mix the aggressive, streetwise sound of Southside Syracuse group G4S 500 Boyz with the soulful lyrics and acoustic melodies of Gatea, who performs with an accompanying guitarist.

The Last Hope team has begun to cultivate a self-sustaining scene of artists looking to build in their hometown and develop a grass-roots movement.

“I feel as though everyone’s dream is to make it in their hometown, as hard as it is,” Sanchez said. “I’m always going to preach (Syracuse area code) 315. There’s a bunch of talent here, there’s a lot of love here, there’s a lot of good people here. If everyone were to take the first step to showing love instead of waiting on it to be shone on them, we’d be in a way better place.”

Despite all obstacles, many artists feel a renewed sense of hope for the budding community. “The scene is on the incline. There’s a lot of fresh talent out here,” Last Hope artist and co-founder Brandon “Sk8board” Mathis said. “Being in touch with the fans is key, make them feel like they’re a part of it, because they are a part of it; we’re all a part of it.”

While Syracuse lacks the same hip-hop infrastructure as some of the East Coast’s bigger cities, there are plenty of local strongholds nurturing the area’s wealth of talent. Subcat Studios offers industry-level recording experiences without breaking an artist’s budget. The mixing, mastering and overall experience goes a long way in developing amateur artists into seasoned professionals.

“There’s tiers. There’s kids making music that could be good, but they’re recording terrible quality,” said Gaeta, who also engineers a lot of his own work. “They’re wasting their time on a song that, if recorded and engineered correctly, could be a hit. They have the passion, they just need the platform.”

Culture comes in waves, and as members of the new generation of talent look to establish their own voices, they know that shifting the older generation’s attitude about hip-hop is crucial for the scene’s success.

There was a lot of love that evening at Funk N Waffles. The respect and camaraderie was evident from artists of all backgrounds and skill sets. Everyone was there for the same purpose: to share their love for the music.

In between hosting and performing, Sanchez spent his time in between sets mingling with fans and making sure everything ran smoothly during the three-hour show. As the Last Hope team took their turn onstage, the energy they gave was reciprocated by the hometown crowd’s cheers and applause.

“There’s a lot of ambition here,” said Aaron Hicks, a local musician and house sound engineer for Funk N Waffles. “It’s just the generational gap that keeps things stagnant. There needs to be a cultural change in the city of Syracuse.”

For now, hip-hop artists remain on the outside of the local music scene. But change is in the air as the committed few continue to build their movement, show by show, fan by fan, one day at a time.

Christian Medina Beltz is a graduate student in the Goldring Arts Journalism program at Syracuse University.