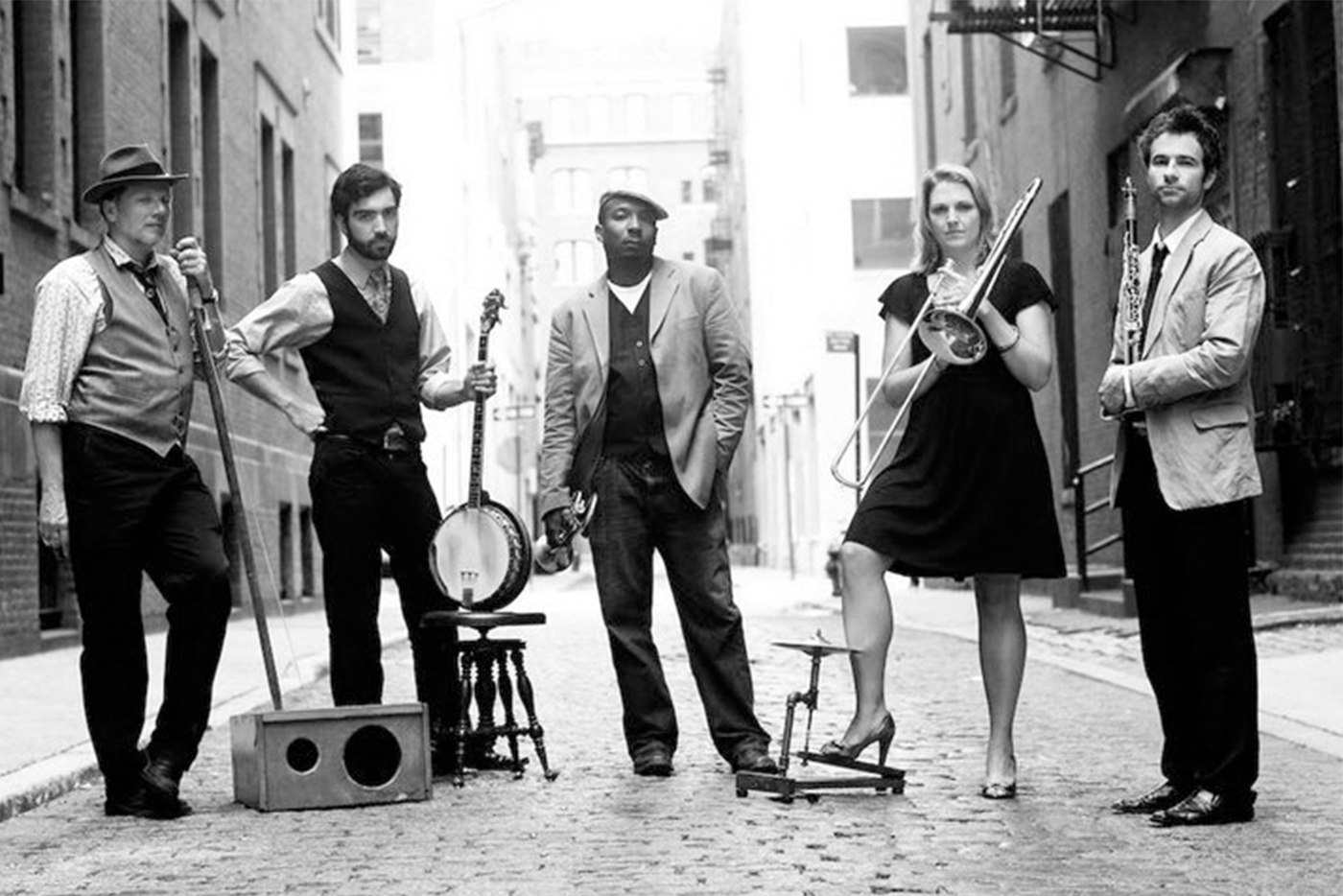 The idea was always to bring the music to the people. Over its nine years in existence, New York City’s Baby Soda Jazz Band has performed at big Big Apple venues such as the Rainbow Room and the Village Vanguard, but the band’s most satisfying gigs have been played on the streets and the subway.

“It feels like music on the street makes a city a real city,” says de facto bandleader Peter Ford, a dapper dude who often sports vests and fedoras and plays a unique and toneful one-string bass. “The street and the subway, that’s really where you can connect with people.”

When the combo cooks on a sunny afternoon at Washington Square Park or a darkened platform at the Union Square subway station, passers-by are often stopped in their tracks by lively renditions of tunes ranging from “Weary Blues” to “Palm Court Strut.” Ford knows the combo’s connecting when he sees people looking up from their smartphones and pocketing those ubiquitous gizmos. He knows it’s happening when toddlers dance and old folks clap their hands. He knows it’s working when they gladly drop dollar bills into the open instrument case.

“This music is full of joy, full of life,” Ford says, “and when we’re playing on the street we’re really being in a community, reaching all aspects of human condition. We’re not recreationists. We don’t play note-for-note Bix Beiderbecke solos or that kind of thing. We’re like a lot of the other younger bands, playing this music because we love the music, but not as a museum piece, more as a part of the community.”

Although climbing on a lower rung of the Big Apple jazz ladder, the Baby Soda Jazz Band routinely features some of the best musicians in the city. Trumpeter Bria Skonberg has often busked with them and appears on their 2012 disc, Baby Soda Live at Radegast. “The Baby Soda Jazz Band is like a big family,” says Skonberg, one of the hemisphere’s most promising young jazz artists. “I was very fortunate to be invited in right when I got to New York thanks to my good friend, Emily Asher.”

Asher, the Brooklyn-based trombonist and vocalist, played and recorded with Baby Soda circa 2009 to 2012 before launching Emily Asher’s Garden Party. When Skonberg arrived in Gotham from Canada, Asher immediately introduced her to the Baby Soda outfit.

“My flight landed at 6 a.m. and by 11 a.m. I was making music in Washington Square Park with Baby Soda,” Skonberg remembers. “Around 1 p.m. Wynton Marsalis stopped to listen and gave us a thumbs up. I think we were playing ‘Whinin’ Boy Blues.’ Between finding a wonderful group of kindred spirits and seeing the Great Oz of the trumpet walk by, I had all the signs that I had made the right choice to move and haven’t looked back.”

Another top trad brass player, cornetist Ed Polcer, the 79-year-old veteran of Benny Goodman’s small group and former co-owner of Eddie Condon’s Jazz Club, plays with Baby Soda at least twice a month. “The band is very people-friendly, producing a comfortable feeling between the players and the audience,” Polcer says. “They’ve welcomed me into the gang and introduced me to scores of younger musicians.”

Ed Polcer’s brass-playing son, Ben, and accordionist Patrick Harrison co-founded the band during the winter of 2007-2008 while the two shared a drafty loft in downtown Brooklyn. “We wanted to organize all the New York City guys that we had met during our time with our band, the Loose Marbles,” Ben Polcer recalls. “So we started a new project, recorded a CD and hit the streets and subways.”

The new project needed a name. Ed Polcer’s rumored, but hotly denied, habit of brushing his teeth with baking soda seems to have inspired the combo’s unusual moniker. “Bass/sousaphone player Jason Jurzak was joking around one day when we were touring in Berlin,” Ben recalls. “He was acting as Ed Polcer doing a commercial for the made-up product ‘Baby Soda,’ a new toothpaste. Patrick Harrison thought it would be funny to name the band after that.”

Ford allows that the name’s “a little goofy,” but it attracts attention and is easy to remember. “I think of Baby Soda as a kind of elixir,” Ford says. “This music is an elixir that keeps people happy.” In fact, the group named its 2010 sophomore recording Jazz Roots Elixir.

The band’s ever-shifting lineup poses no problems, Ford says. Although a relatively healthy trad-jazz scene now spices the Big Apple, Ford maintains that “no one has enough work for a musician to commit to one band. In most of the bands here, each musician may have four or five other projects they’re working on. But we’re all familiar with the repertoire, and we know each other and we’ve played together enough that you can and keep the quality very high.”

From “Tiger Rag” to “Tennessee Waltz,” the band’s arrangements are universally melody-driven. “With this music, the road map inside every song is melody,” Ford observes. “Melody is the secret weapon. You don’t get lost.”

Peter Ford holds down the bottom for the Baby Soda Jazz Band playing a single-string box bass of his own creation. He started out on the slightly more conventional No. 2 galvanized washtub bass before switching to a wooden bucket bass a dozen years ago when he was playing Irish and klezmer music with the Mad Jazz Hatters.

“I’ve heard of tea chest basses and packing-crate setups, but when I was looking for a warmer, wittier sound, I made my own bass box out of pine.”

Ford’s triangle-shaped axe is designed in homage to the three-sided bar at Café Moto, on Broadway in South Williamsburg, where Baby Soda held forth every Saturday for several years. (The café is now closed.)

“First I built one with one large hole, Ford says, “but now I put two holes in front like a speaker port, so it’s not as loud, but the low end has more pitch definition and a better spectrum of tones.”

Indeed, when Peter Ford plucks his string and pulls back his stick, he creates bass notes that resonate with a tone as golden as any double bass or a tuba.

“Most people haven’t seen one before,” he says, “so, as a novelty, it draws people in.”

Ford plays tunes in all 12 keys, and he consciously swings the music. “People are compelled to listen,” he says with a satisfied grin.

Down Under Trumpeter Digs Baby Soda

Raised in Melbourne, Australia, Simon Wettenhall rebelled against his family’s preference for classical music. “I was the renegade,” he says.

Once he heard a Louis Armstrong record, he dropped piano lessons and grabbed a trumpet. Wettenhall began a lifelong exploration of New Orleans jazz.

Over the years, he has performed with the Oceanic Orchestra, big-band vocalist Barbara Rosene and, most notably, with the Woody Allen and Eddy Davis New Orleans Jazz Band. That combo, featuring the famous film director on clarinet, holds forth most Monday nights at the Carlyle Hotel in downtown Manhattan. They’re booked there every Monday through Dec. 12.

A couple years ago, Wettenhall hooked up with the Baby Soda Jazz Band. Bandleader and bass player Peter Ford is mighty glad to have Wettenhall blowing for Baby Soda.

“He’s got a great ear and a great attitude,” Ford says. “And he plays his ass off!”

Here’s how Simon Wettenhall explained the difference between the Allen-Davis ensemble and the Baby Soda Jazz Band:

“The Davis ensemble plays music in the main recorded by bands using similar instrumentation. The style of those bands was well developed and reached a peak in the early- to mid-twenties and later was revived in the 1940s. It is this specific style the Davis band draws on. It is a style that contains elements of blues, marches, ragtime, spiritual and popular music of the period and sometimes later.

“Baby Soda on the other hand, draws on a much wider variety of sources and influences to create dance and listening music that is obviously traditional jazz but with a much broader reference base not only in repertoire but also in approach.

“My favorite Baby Soda tunes are not necessarily showcases for the trumpet but the effective reductions of arrangements for much larger ensembles. Examples: are ‘Jubilee Stomp’ by Duke Ellington or ‘Deep Henderson’ as recorded by King Oliver’s Dixie Syncopators.

“I also love the tunes that provide great platforms for improvised ensemble variations, tunes written by Louis Armstrong, Jelly Roll Morton, Irving Berlin and so many other composers of the day. The key is that the band can move from something highly arranged and deliberately referential to a loosely executed New Orleans-style hymn or blues.

“I find it exciting to work with Baby Soda because of the opportunities for expression in multiple areas of the musical landscape.”