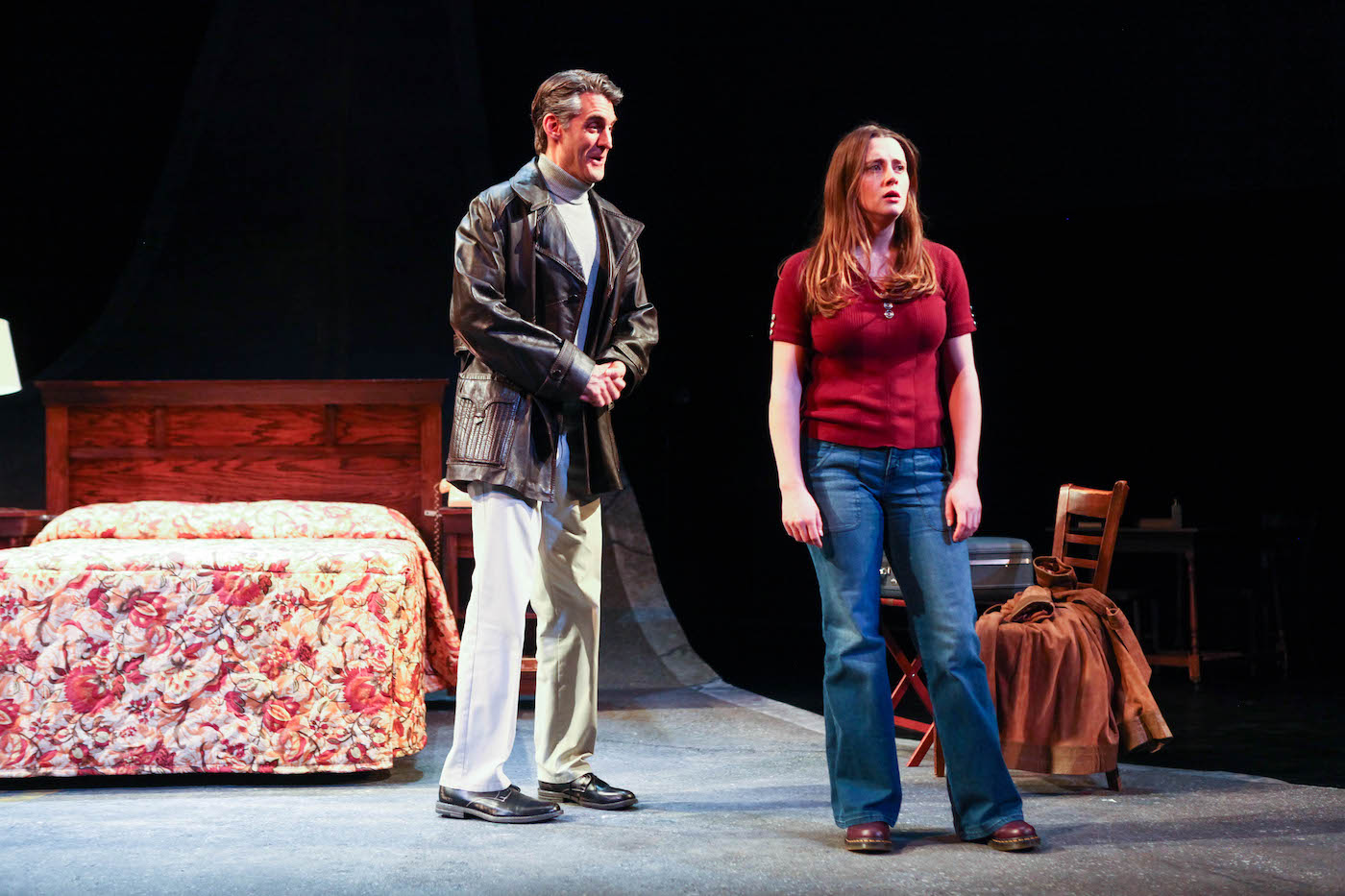 The strength of Syracuse Stage’s “How I Learned to Drive” is two stupendous roles.

Paula Vogel’s Pulitzer Prize-winning How I Learned to Drive (1997) comes to Syracuse Stage (running through April 23) just as Vogel makes a Broadway debut with a new play titled Indecent. In the intervening 20 years Drive has been produced dozens of times and has been assigned in literature classes, while Vogel has become a name writer with positions at hoity-toity Yale and Brown universities.

Despite the acclaim and Ivy League gigs, Vogel is essentially an off-Broadway creature. You can tell when the two main characters sit on high stools and mime unseen props. More than that, the deceptively titled How I Learned to Drive is edgy rather than mere commercial entertainment. It’s intended to be unsettling.

The sometime narrator of How I Learned to Drive, who goes by the demeaning sobriquet L’il Bit (Madeleine Lambert), refers to her people as “crackers.” Her setting is Maryland’s Eastern Shore, the poorer half of the state that sympathized with the Confederacy in the Civil War. 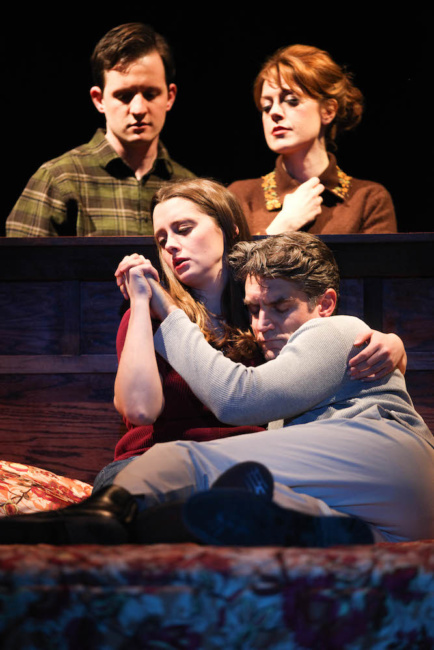 Michael Brusasco (bottom right) and Madeleine Lambert in the foreground, while Nick LaMedica (top left) and Karis Danish look on in the background in Syracuse Stage’s How I Learned To Drive. Michael Davis photo | Syracuse New Times

In nearby cities like Baltimore or Washington, D.C., where playwright Vogel grew up and attended Catholic University, the local accent is perceived as “Southern.” Dialect coach Thom Jones, an American Henry Higgins, has rendered this accurately, also with that of the principal male, Uncle Peck (Michael Brusasco), up from the Carolinas.

Vogel gets to her wince-inducing theme without delay. In a flashback to 1969, when L’il Bit was 17, gentle, unthreatening Uncle Peck drives to a rural parking lot for the ostensible reason of giving driving lessons; his real purpose is to fondle her burgeoning breasts. She is uncomfortably submissive, not complaining when he reaches up under her blouse to under her bra, but also implying that she fully expected that this is what he was about.

Helpful flashcards by production designer Caite Hevner identify the date of each out-of-chronology scene, flashing forward and backward, in many of which Peck is handling L’il Bit in slightly different circumstances with different reactions. She goes to a fancy college somewhere in upstate New York, never named; Vogel has an M.A. from Cornell. At the end of the 90-minute one-act play we are back to the early 1960s for a revelation that we could not anticipate.

Even though American writers have been telling us for decades that white rural Protestants cannot shake the strictures of their Puritan heritage, the crackers in this neck of the Eastern Shore seem almost Babylonian in their acceptance of the body. Both L’il Bit and Uncle Peck are named in unflattering genital references. L’il Bit’s reckless, alcoholic mother is referred to as a “titless wonder.” Her misogynistic grandfather, often seen with his hand thrust beneath his belt, is “Big Papa,” but not for the reasons Tennessee Williams would have suggested. Then there’s Cousin BB, named for Blue Balls. But that does not mean anyone would sanction pedophilia.

Uncle Peck and L’il Bit are never alone on stage for very long. Three other players dance through a variety of roles, often as a Greek chorus or any number of undeveloped family members who appear as fleeting snapshots without change of costume. They are the diminutive Remy Zaken as a teenager and a grandmother; leading-lady Karis Danish, sometimes seen as the careless mother; and boy-next-door Nick LaMedica, who may appear as the crude grandfather.

Despite Drive’s off-Broadway roots, this co-production with Cleveland Play House, directed by Laura Kepley, is much spiffier than previous Central New York mountings. That begins with the dominating set of a two-lane highway stretching off to infinity, designed by Collette Pollard and superbly lighted by Mary Louise Geiger.

Interspersed with the date-changing flashcards are fuzzy black-and-white film clips that look like vintage educational films. These are supported by the kind of insipid disembodied music, devised by Broken Chord, that does not rise to the dignity of Muzak. Cumulatively, sound and video has a comic effect, which playwright Vogel says in interviews that she fully intended.

Many students who read How I Learned to Drive for class are likely to have quite different opinions of the play than do audiences who see any live production. Uncle Peck is a child molester. Now that the subject is spoken about openly, we know that many such molesters are gentle, reassuring sorts, like counselors, clergy persons or soft-spoken, “helpful” relatives. In life, no one forgives them because they were also effective driving instructors.

In interviews playwright Vogel has said that she sees the plot as an homage to Vladimir Nabokov’s Lolita. One of Nabokov’s devices is to get us to share the views of the older man, Humbert Humbert, and not recoil from them.

The principal weakness of How I Learned to Drive is that L’il Bit is too often a narrator, talking to us through the fourth wall, instead of being a performing character. The strength of the play, and the reason it is so often revived, is that it gives us two stupendous roles.

Michael Brusasco’s Peck is a masterwork of ambiguity, a predator who resists demonization. Given that many of Vogel’s men, reported from offstage and not seen, are caricatures of redneck sexism, Peck, with such outrageous failures, might be the best of them.

Even more so, Madeleine Lambert’s L’il Bit will not lie flat for hasty scrutiny. She’s not the seductress of Nabokov, nor is she a helpless victim. As “learn” is a word in the title, her growth in the play is the strength that accrues from overcoming adversity. When ready to drive, she puts the pedal to the metal.