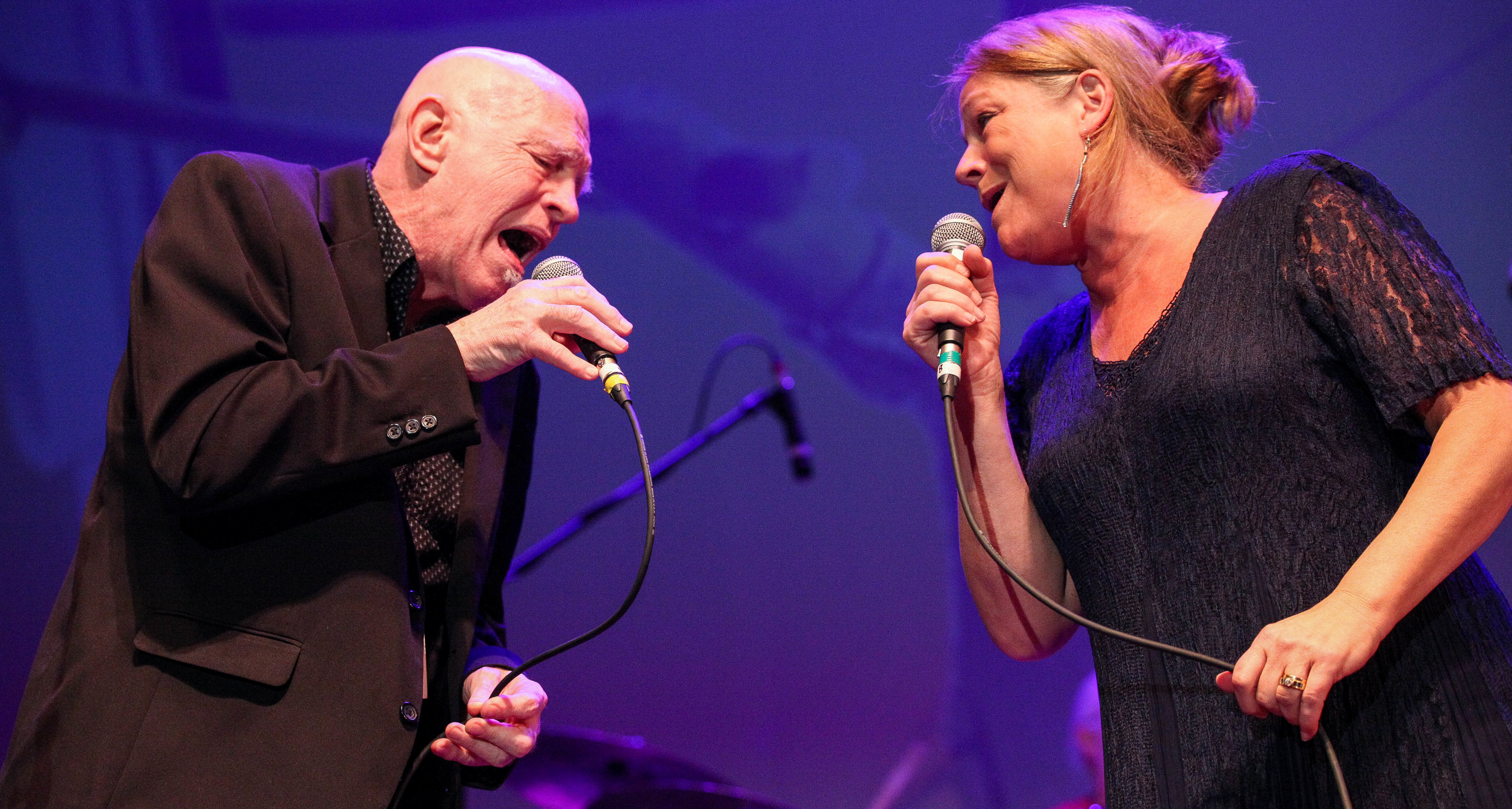 Despite a furious nor’easter that dumped a foot of snow on Central New York last week, more than 600 die-hard music fans shoveled out their cars and trudged across a slush-packed James Street to attend the 25th annual Syracuse Area Music Awards (Sammys) on Friday, March 2, at Eastwood’s Palace Theatre.

This year’s show came off without a hitch, a remarkable accomplishment given that the production stitches together 23 separate segments, with 18 awards followed by acceptance speeches plus five live performances. Too often over the years, the Sammys have suffered the bane of all awards shows: protracted length.

But thanks to careful planning by the Sammys committee helmed by Liz Nowak and stage manager Chuck Decoursey a.k.a. Chucky Luv, plus the deft improvisations of emcee (and 2018 Hall of Fame Lifetime Achievement honoree) Dave Frisina, this year’s shindig refused to get bogged by endless speechifying, and the whole show went down as smoothly as a pint of Skinny Atlas. It concluded less than three hours after it began, allowing showgoers a chance to continue the revelry at the Sammys’ after-party with Grupo Pagan at Funk ’N Waffles on South Clinton Street.

Even after delaying the show’s start by 23 minutes to accommodate storm-stragglers, once Frisina stepped to the microphone the Sammys’ obelisk-like trophies were doled out with class, precision and the occasional clever quip.

“I don’t know jack dick about jazz,” George Rossi exclaimed as he presented the Best Jazz Award to the fusion trio E.S.P. “But I know enough to associate myself with jazz players.” 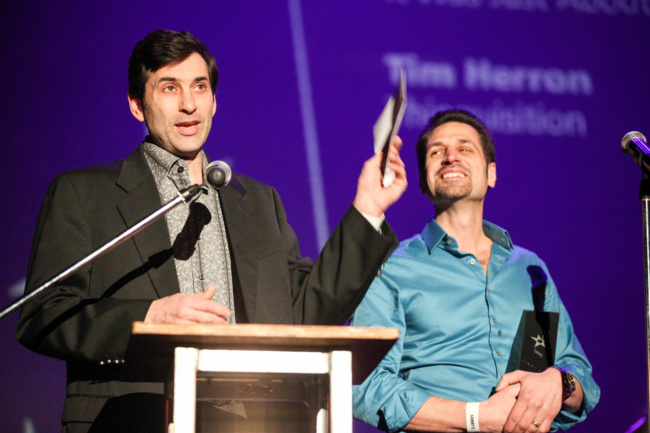 E.S.P. offers thanks for their Sammy. Michael Davis photo

The only other group to win three successive Sammy awards for its recordings is Mark Doyle & The Maniacs, who took Best Blues honors in 2010, 2011 and 2014.

In accepting the trophy, E.S.P. leader-bassist Matt Vacanti noted the tough competition his group faced this year, with CDs by bassist Peter Allen, guitarist Tim Herron and drummer Bob Holz. Vacanti joked that he and guitarist John Magnante and drummer Evan Duchene were surprised to win “because we just recently learned to play our instruments by watching instructional videos on YouTube.”

The “people” voted Infinity as their favorite local band. A crafty quintet of veteran musicians, Infinity specializes in Journey material and covers hits from the 1970s and 1980s by artists such as Foreigner, Toto, Loverboy and Styx.  In accepting the Sammy, keyboardist Jamie Colucci gave a lesson in how to properly conduct oneself at the podium: Introduce yourself by name to the audience and identify your bandmates. Colucci shared the special moment with bassist Dave Impellizzeri, guitarist Shawn Plourde, singer Rick Wilson and drummer Mike York.

Five diverse and dynamic local bands brought the awards show to life with rousing performances on the Palace’s palatial stage.

The irrepressible Skip Murphy, looking sharp in a tux and red bow tie, presented his Merry Pranksters performing two originals: “Eyes of Blue” by Dave “Big D” Schneider and “That’s Alright with Me” by keyboardist Dave Liddy. The band’s cover of Etta James’ “I’d Rather be a Blind Girl” showcased a spirited vocal exchange between Sharon Allen and Mark Gibson that drew repeated applause.

Jam band quartet Count Blastula featured songwriter-guitarist Adam Fisher as he vocalized confidently and clearly on tunes from the band’s new disc Exotic Candy. Then Fisher picked out some stinging guitar parts on a happy-go-lucky instrumental, “That Ol’ Slimmerin’ Sauce.”

Elephant Mountain lived up to its name by carving out some huge hard rock fueled by the impressive lung power of singer Joe Altier, who belted out “Born Before My Time,” a track from the band’s Birth of a Conspiracy disc, followed by “The Burden.” Guitarist John Hanus, bassist Mike Ryan and drummer Sullyfong ably supported Altier’s vocals, and B3 organist Lou Segreti and guitarist Slider Azzoto added plenty of punch to the arrangements.

Altier dedicated the band’s final tune, “3304,” to first responders of all types. That numerical title recalls the number Joe’s dad wore on his turnout gear when he was a firefighter.

After opening with the David Bowie anthem “Suffragette City,” which never sounded this good, Dove recalled its fascination with Jethro Tull with “Locomotive Breath” and “Cross-Eyed Mary” sandwiching Brian Auger’s “Listen Here.” Those three numbers allowed Bartolo to show off his flute work on the Tull tunes and his Eddie Harris-like sax chops on the Auger composition.

Dove closed the show with a vehement version of Elmore James’ “One Way Out,” famously recorded by the Allman Brothers on 1972’s Eat a Peach during Dove’s heady heyday. 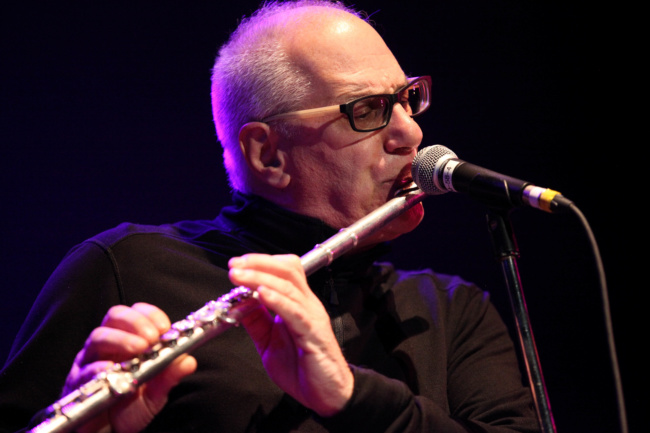 On Thursday. March 1, the Sammys 2018 Hall of Fame induction ceremony was staged Upstairs at the Dinosaur Bar-B-Que. Former Dean Brothers guitarist Holly Gregg acted as emcee, as the Sammys inducted three individuals and one classic band while also honoring an educator of the year and a lifetime achiever.

Drummer Tom McGrath, who — like the man he was there to introduce — excels in both the rock and jazz idioms, presented Hamilton College instructor Monk Rowe with the Educator of the Year Award. A talented saxophonist, Rowe is director of the Fillius Jazz Archive at Hamilton College, where he oversees hundreds of video interviews with musicians.

In his acceptance speech, Rowe quoted Fats Waller regarding the music students a teacher sends out into the world: “One never knows, do one?”

The 200-plus audience laughed when Rowe reminisced about playing keyboard in the 1970s rock-show band Mr. Edd. “One night I’d be dressed up like an old man,” he said. “The next night I’d look like an old woman. Once I found myself onstage trying to play the keyboard while I was wearing a Muppet puppet on my right hand.”

This is a great moment in time for the Sammys, Rezak noted. “Joe Driscoll is on the Common Council, Jukin’ Bone’s seminal album has finally been released and (former Syracuse New Times editor-in-chief) Mike Greenstein, Mr. Goodvibes, is in the house.”

Rezak might also have mentioned that a Syracuse saxophonist —  state Sen. John DeFrancisco —  is running for governor. For his part, DeFrancisco delivered proclamations honoring each of the new Sammys Hall of Famers.

As he talked about promoter, agent and production manager Stacey Waterman, Rezak mentioned that he’d recently attended the Grammy Awards. “The Grammys have nothing on the Sammys,” he declared.

In fact, Rezak insisted, the Sammys are ahead of the curve in the way they recognize the contributions of women, as evidenced by this year’s inductions of Waterman and veteran tour manager Maryjo Spillane. “Hashtag it’sabouttime!” he exclaimed.

A quick check of the recipients list at SyracuseAreaMusic.com reveals that, including this year’s class, 13 women out of 105 total inductees are now in the Sammys Hall of Fame. Just two women have been honored as Lifetime Achievers, Pat Lotito and Rose Bernthal, but only in tandem with their husbands, Joe Lotito and Murray Bernthal.

Before handing Waterman her trophy, Rezak asked for some help from guitarist Colin Aberdeen, bassist Steve T. Winston and singer Carolyn Kelly, who performed a brief version of The Band’s “The Weight,” with original lyrics honoring Waterman.

As she cradled the Sammy in her arms, Waterman thanked her mentors. “I learned the right way to handle things from Dave (Rezak),” she said. “And Chuck Chao taught me everything I know about making something out of nothing as a production manager.” Stacey also thanked two late compadres, Lost Horizon owner Greg Italiano and booking agent Susan DeNaro Harrington.

After being inducted with a largely tongue-in-cheek speech by his Cross Creek colleague Dave Novak, songwriter John Cadley thanked about a dozen fellow musicians and influences including his late mother, whose parenting skills included quoting Shakespeare.

To bring road warrior Maryjo Spillane to the stage, a video flickered showing ShineDown frontman Brent Smith singing Maryjo’s praises. “She’s always the first one in and the last one out,” he said of the longtime tour director. “And she’s a blast to be around!” Then another frontman — Jeff Gordon, of the local band Hard Promises — inducted her into the Hall of Fame.

The woman who has toured the world with artists as disparate as Korn and Dolly Parton declared there’s no place like home. “I spend six to eight months a year away from home,” Spillane observed, “but Syracuse is the best place on earth to live. Trust me: I’ve been there!”

The Syracuse Music Authority, Ron Wray, inducted Dove, recalling the night in February 1973 when Ronnie James Dio caught the act at The Shoreline on Old Liverpool Road. “Dio was impressed with this super-tight professional band with a pronounced jazz feel and original material. Dove was truly a Central New York music treasure and they still are.”

Simplelife musician Mike Frisina and his three brothers presented their father, radio veteran Dave Frisina, with the prestigious Lifetime Achievement Award. “Our dad’s not one for garnering attention to himself,” Mike said. “He likes to put it on other people. He’s been your champion. He has selflessly tried to provide a spotlight for everybody who wants a chance to shine.”

Dave Frisina was hired by WAQX-FM 95.7 (95X) in 1978 and now works the weekday afternoon drive shift for The Rebel 105.9, as well as producing two Sunday showcases, Soulshine from 10 a.m. to 2 p.m., and his long-running local music show Soundcheck at 9 p.m.

“Apparently 40 years in radio is a lifetime,” Frisina quipped. “It’s like dog years or something, especially to stay in the same city. A lot of radio people are like carnies, moving from place to place. I’ve been lucky enough to make a career here and raise a family here in Syracuse.”

Frisina is not only a passionate advocate for local music, he’s also an outspoken conscience for local radio. He noted that innovations such as Spotify and satellite radio are always rumored to ring the death knell for radio broadcasting.

“But we can do something they can’t,” Frisina said. “We can play local bands and do interviews with local musicians. Let people hear the quality of music we have in Syracuse.”

And he said it can be done not only on special shows such as Soundcheck, but at all times of the day in regular rotation. “Local radio has a responsibility to let people hear the quality of music being made in this city,” Frisina said. Amen to that!