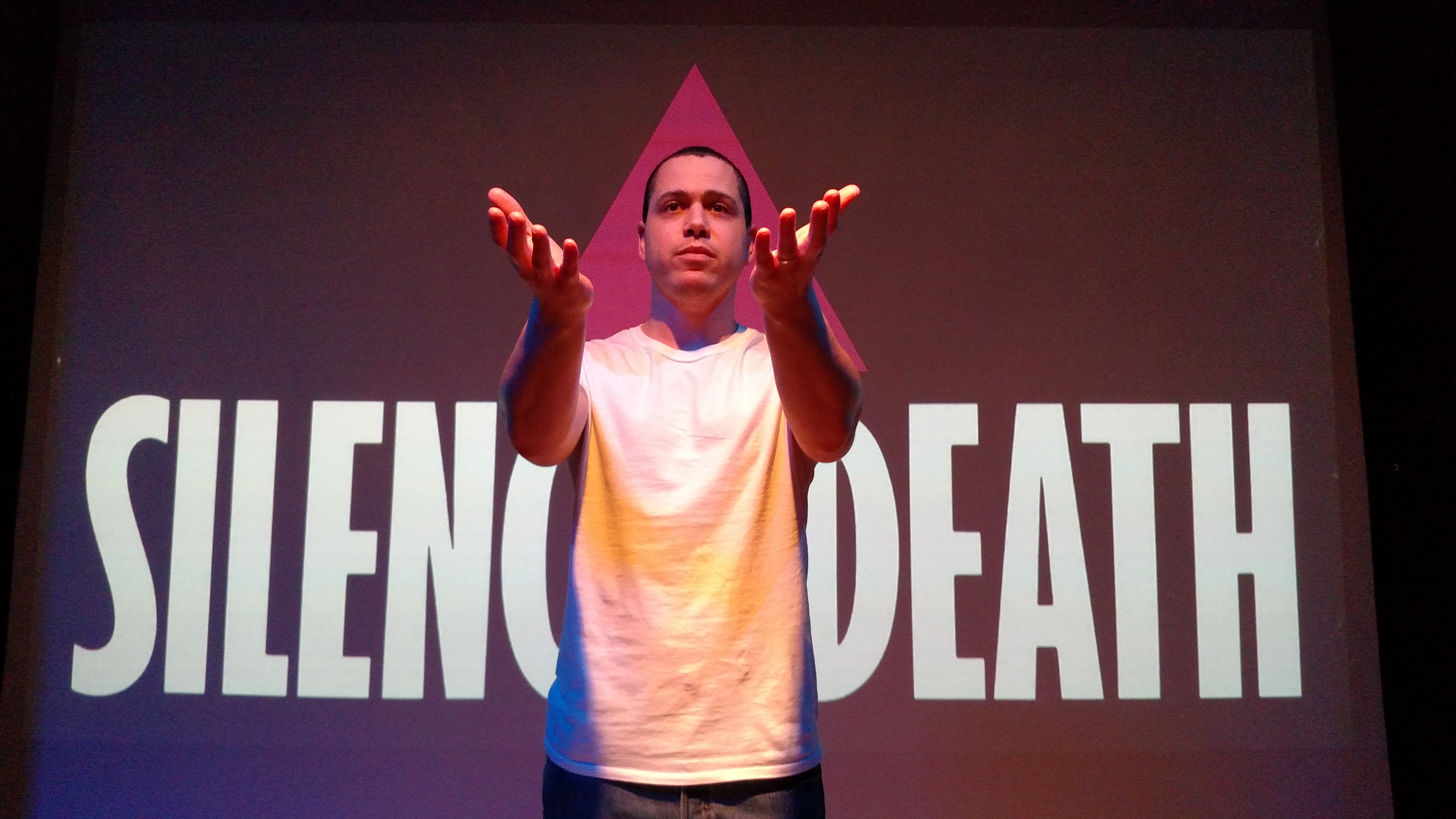 Larry Kramer, now 82, is an American playwright and AIDS activist best known for his groundbreaking 1985 work The Normal Heart. In that play Kramer made a hard-hitting case for gay rights, and also depicted two men kissing on stage, almost the first time audiences had seen such a thing.

That kiss does not appear in David Drake’s one-man play The Night Larry Kramer Kissed Me, a Rarely Done production running through Saturday, March 10, at Jazz Central. Then again, Kramer doesn’t appear, either. It’s all about the unnamed narrator, played by long-distance runner Junior Morse, who represents the playwright.

Drake, an Obie-winning actor, was born in Maryland on June 27, 1963, as he tells us often. One of the first episodes in the narrative is his sixth birthday in 1969, the night of the Stonewall riots in Greenwich Village, a landmark moment in gay political consciousness. Even though this does not signal that the narrator/Drake will be throwing himself into political harangue, that night does point the direction his identity will take. On the same night he was thrilled to see a community theater production of West Side Story.

Playwright Drake and director Dan Tursi see The Night Larry Kramer Kissed Me as a one-man drama rather than a monologue in the manner of the late Spalding Gray. It breaks into nine parts with different rhetorical textures. It’s pretty common for under-employed actors to write one-man vehicles for themselves. Each year the Edinburgh Fringe, to name but one venue, features about a thousand. Along with being generally autobiographical, the work should draw on some performance skill the actor-playwright has. It is often mimicry, but Drake never asks for that.

Instead Drake’s dexterity runs to rapid-fire phrasing and the smooth delivery of near tongue-twisters. Sometimes this takes the form of repeated wordplay, the way LP records sounded when the needle skipped. This approach becomes a kind of choral poetry, evocative but never obscure. The narrator is being candid and direct, but it is not a conversation like Spalding Gray in his monologue.

The “kiss” of the title comes on the narrator’s 22nd birthday, June 27, 1985, when he attends a performance of The Normal Heart. The entire performance, including the onstage male kiss, ignites him with all of Larry Kramer’s goals and commitments to activism, not only to champion gay pride but even more revile the dismissive indifference of straight America to end the deadly plague of AIDS. He joins ACT-UP, the disruptive activist lobby that Kramer had founded.

The narrator does not, however, harangue the audience. The first three episodes in The Night Larry Kramer comprise the “Birthday Triptych,” including the aforementioned ages 6 and 22. In between, when he was 16 he saw a production of A Chorus Line in Baltimore. He is moved to tears by the tragic gay dancer Paul, whom he called the “Puerto Rican boy.” He confesses his identification with Paul to another teen boy, Tim, whom he kisses as they are driven home. Caught in the act, he realizes that New York can be the only place for him.

The birthday triptych also separates Drake’s voice from Kramer’s. The narrator is a gentler, less polemical figure; his sense of self grows with the performing arts, not only live theater but also with music, specifically the Village People. The narrator’s attraction to them began much earlier, when he played with a neighbor girl named Janis. Her bullying older brother derided the music group as “fairies.” The narrator wonders whether the singers could be recruited for protection against other bullies before he has learned the terms “homophobe” or “gay basher.”

References to the Village People were still current when The Night Larry Kramer Kissed Me premiered in spring 1992, running for a year. In the current Rarely Done production, quite a bit of the text has been updated and localized, possibly prompted by a widely publicized benefit revival in 2013. Not only are there several references to Syracuse but also a citation of the University Sheraton Hotel.

Toward the end of the two-act, 100-minute performance, there are references to a “thousand points of light” (shorn of its linkage to George H.W. Bush), speculation that the U.S. Census will record more gay citizens than Alfred Kinsey imagined there should be, and a gay-friendly remake of The Way We Were. Gays will walk the streets, hand in hand, without fear of assault.

While not the most visible member of the Rarely Done troupe, Junior Morse is a veteran of five previous shows, including Psycho Beach Party and Jeffrey. The verbal dexterity Drake must have had is not Morse’s long suit, but he delivers an empathetic and affecting narrator, surefooted and adroit in responding to perhaps a hundred lighting cues and lightning shifts of mood. He convinces us that the kiss was life-transforming.