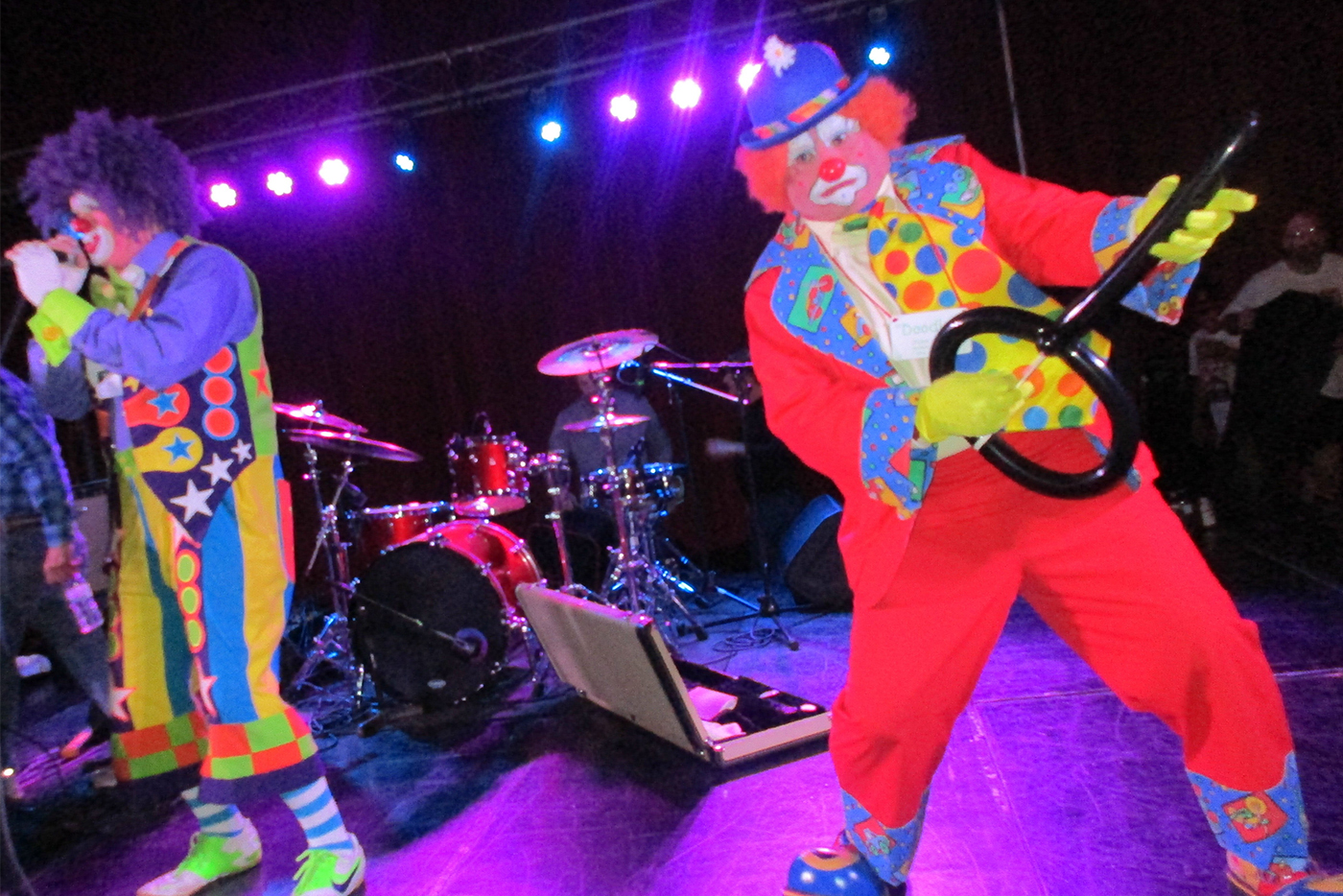 Bassist Randy Richmond admits he was quite emotional watching his musical peers as they took the stage at the second annual Musicians for Shriners concert on May 21 at the Kallet Civic Center in Oneida. Richmond, who co-organized the event, knew they were all there to lend their support and their love to some children who very much needed them, including one in particular who had close ties to everyone there.

“This brings a little bit of a tear to my eye, not in a sad way but in a happy way, to see this lineup of friends up there,” Richmond said shortly after the concert started. “These are all great musicians who have great compassion, but they are also so humble. They are truly the people who make this world tick.”

“It is really great to see so many people coming out and having a great time,” his wife and event co-organizer Cindy Evans added as she looked over the packed house. “I really like seeing how happy everyone is.”

Richmond recalled it was a touching testimonial he saw last year on fellow musician Paul Case’s Facebook page that prompted him to action. Case had posted a heartfelt “thank you” message to the Shriners Hospitals for Children in Boston, describing in detail an accident at home that left his then-6-year-old daughter Katie burned over a third of her body. Case explained how Katie was playing outside that day when he heard her screams, came running out to her, and found her with her skin melting away.

Beyond that graphic description of every parent’s fear, Case’s story also told of the charitable outreach of Shriners Hospitals which give care to kids needing burn treatments, orthopedics, and surgery for spinal cord injuries, and cleft lip and palates regardless of the family’s ability to pay. They gave a compassionate outreach to not only Katie but the whole Case family, both medically and financially.

Case, a longtime professional musician based in Old Forge, admitted he isn’t a rich man by any means. He said that kind of care would have caused him to need to sell his home and his assets to pay the bill. Not with the Shriners Hospitals, however, as they have not been interested in pursuing payment — only in making Katie well, he said.

Shortly after seeing that post, Richmond asked Case about the Shriners, and admitted both men had tears in their eyes as Case explained about the day of the fire and their years with the Shriners. Case said his family, including wife Julie and son Paul Justin, were indebted to the Shriners for everything they had done.

Both men knew they had the opportunity to give something back through their own musical talents and with a little help from their fellow performers. Together with Evans, they created the Musicians for Shriners concert benefit, with the inaugural event held in June 2016 featuring Moss Back Mule Band joining Paul Case Band and ½ Fast Eddie and the Rusty Nuts, with Richmond himself on bass, at the Kallet Civic Center.

That event raised several thousand dollars for the Shriners, but Richmond admitted attendance really wasn’t what he expected. To improve turnout, the organizers lowered the admission price this year to a family-friendly $5 fee, with kids 12 and younger admitted free.

For five bucks, concertgoers got a full afternoon of entertainment with the returning Paul Case Band and Moss Back Mule Band, plus Classified, Showtime, the Big Easy Duo, and even an impromptu jam session by some of the musical audience members. Several Ziyara Shrine members from Utica were also there, as were Shriners Clowns Doodles, Buster, and Ku-ko.

Case said Katie is now 13 and in seventh grade, and doing well. “She is a beautiful girl,” he said.

Visiting the Shriners Hospitals for Children has been a real eye-opener for Case, who learned Katie was far from alone in her injuries. In fact, Case said, they have found other kids with even more serious conditions.

But at the same time, he has seen marvelous advances in laser surgical technologies in Katie’s procedures, including a technique where they will actually burn slightly some of the affected areas of her skin to ease the removal of the damaged scar tissue. They can also use laser surgery to remove discolored skin, he said.

Katie has spent half of her life visiting the hospital, Case said, and they always feel reassured and comforted when the staff there remembers her, her favorite toy, or what she likes to eat. Katie will visit the Boston hospital’s burn center a few times a year for treatments until she turns 21, Case said, although toward the end they expect those appointments to become just routine checkups.

Katie had just returned from a surgical procedure in Boston the day before the Musicians for Shriners concert and was unable to attend this year. Katie was there for the first one, however.

Each of the musicians on stage that day brought out their A-game in showing their love for Katie and all of the children like her. It was a cause close to their hearts, and the volunteers agreed the event was a welcome outreach to those kids who need their help.

“It was truly an honor to be a part of this,” agreed fiddler Liz Friedel of the Big Easy Duo, who also sat in with Paul Case Band for a few songs. “It was a great event with great people, for a great cause. It was just magic.”