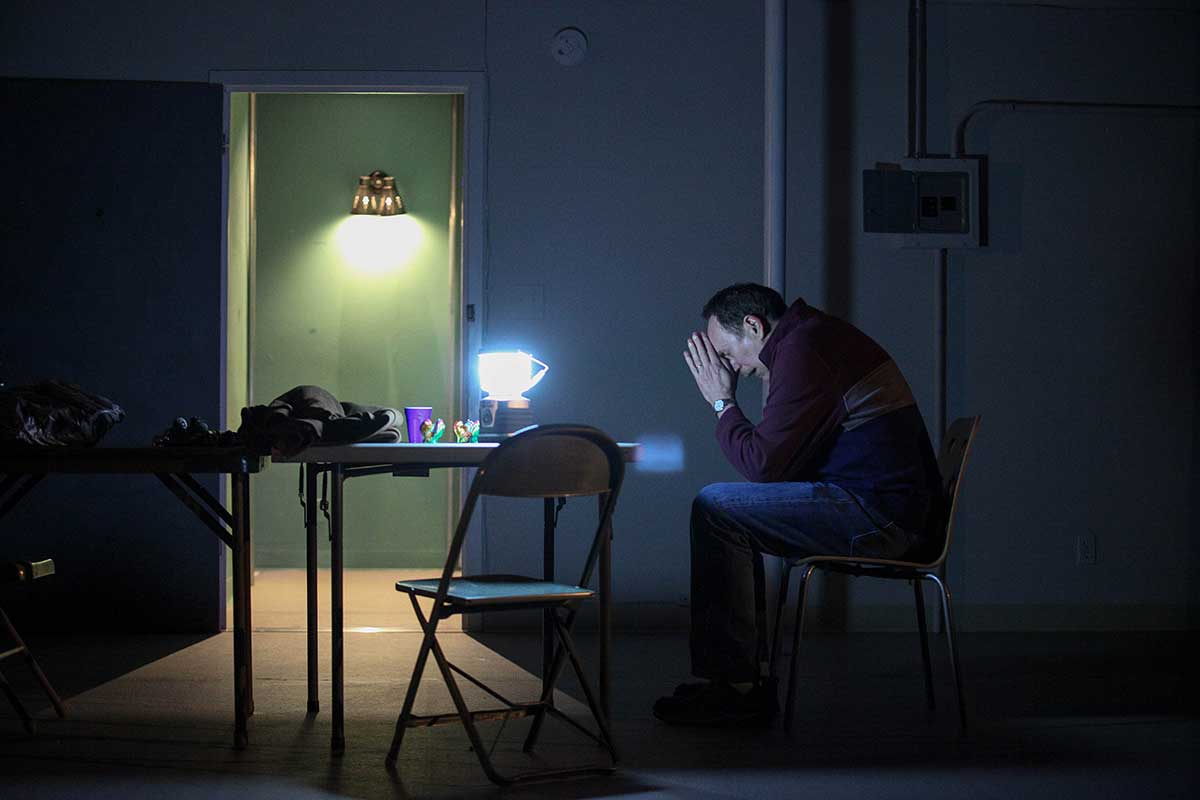 Thanksgiving dinner has long since ceased to be the holiday painted by Norman Rockwell. Given the changes in most families, through education and migration, it has now become the day of making peace with people you are related to but have become very different from, like the talkative uncle who believes every foul frippery uttered on Alex Jones’ InfoWars.

The differences in Stephen Karam’s The Humans, through May 12 at Syracuse Stage, are not so profound. Small sharp differences, however, are constant sources of irritation and pain.

The Blakes are a working-class family from Scranton, Pennsylvania. Part of the significance of the title “humans” and the success of Karam’s play is the candid and non-patronizing way in which class difference is portrayed. The senior Blakes are unstylish. Mother Dierdre Blake (Toni DiBuono) wears brown polyester slacks, and her husband Erik (Skip Greer) has white socks.

Neither is a caricature or comic figure, like Irish-American Bunkers. Instead, they speak movingly and convincingly of their anxieties. Indeed, Dierdre is the choice role of the drama, awarded some of the best lines. The redoubtable Jayne Houdyshell won a Tony Award in the New York City premiere, and DiBuono here harvests every juicy morsel.

Each of the five Blakes is carrying a burden. Joseph Whelan’s useful program notes advise that Karam took as a guide Napoleon Hill’s 1937 self-help book Think and Grow Rich, which outlined the six fears we all face: poverty, criticism, ill health, loss of love, old age and death. They’re all here. Some characters are afflicted with more than one. 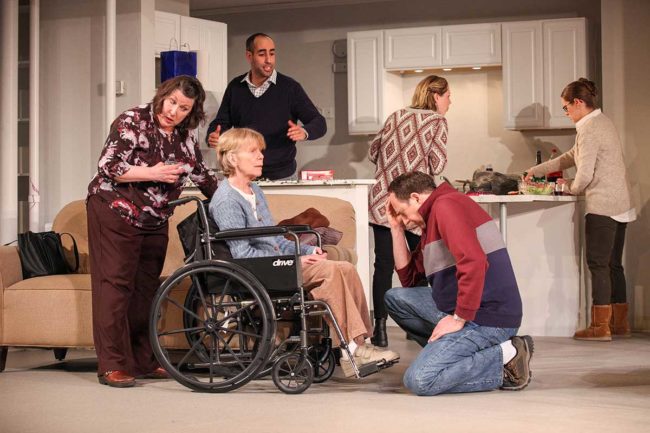 Dinner is at the low-rent duplex of daughter Brigid (Regan Moro) in lower Manhattan’s Chinatown. A musician, blonde Brigid is living with Richard Saad (Thamer Jendoubi), a 38-year-old of undetermined ethnicity. He looks dumbfounded when the family makes the sign of the cross and says grace before dinner.

Richard’s career was delayed while he was hospitalized for depression and is now working on a master’s degree in social work. “How’s school?” Dierdre asks him brightly. Brigid’s abandonment of Catholicism irks both Blake parents but not as much as her living in sin with Richard, a recurrent subject of comment.

Both Blake daughters left Scranton to seek their fortunes, with brunette Aimee (Madeleine Lambert) more securely in the middle class as a lawyer in Philadelphia. We learn from telephone conversations others have not heard that Aimee feels severe pain from the recent breakup with her girlfriend as well as an undiagnosed stomach ailment. She and Brigid might know fleeting moments of difference, but sibling rivalry is not a major theme.

Also with the family is the aged grandmother, wheelchair-bound “Momo” Blake (Suzanne Marley), suffering from Alzheimer’s. She travels with the family because, as Dierdre explains in detail, the cost of care is prohibitive. With more people living into their advanced years, and Alzheimer’s and dementia more widespread, the presence of a family member so afflicted becomes commonplace.

Playwright Karam and director Mark Cuddy treat the matter with delicacy. It is true that the words from Momo’s mouth sound like quotations from a lost Samuel Beckett play, and her lack of control can be both embarrassing and laugh-provoking. The audience is encouraged to treat her with the love and respect afforded by the other dinner guests.

Suzanne Marley may look a trifle young to be playing Erik’s mother. Longtime Syracuse Stage patrons will remember her fondly as the dying literature professor in Margaret Edson’s W;t (2001).

Playwright Karam has acknowledged taking some notes from director Alfred Hitchcock in setting the tone of the early action. Borrowings from Agatha Christie are also plausible. The apartment doors have bars on the windows, a commonplace element for Brigid and Richard but a source of unease for Dierdre and Erik. Lights have a way of going off at the damndest moment. A lack of privacy between the two floors of the duplex means that everyone knows when the toilet is in use, and private comments are overheard.

Above all that, a loud boom periodically rattles both floors of the duplex. Everyone’s a bit on edge, expecting something dreadful to turn up. The loud boom is not Chekhov’s pistol in the first act, however.

Karam keeps our interest high in The Humans without obliging us to take sides. Brigid is probably the closest to the values of a Syracuse Stage audience, but she can be strident and unfeeling. When Dierdre gives her a statue of the Virgin Mary (“They’re seeing her everywhere now,” she chirps), Brigid rolls her eyes in disgust and hurls it to the end of the couch.

Director Mark Cuddy, from Rochester’s GeVa Theatre, where this production originated, says in a program note that it’s important that the family is Irish-American, which is his ethnicity. They all know all the verses of the pub song “The Parting Glass,” the sweetest moment in the action.

It’s possible that all the words in the text could be restaged with another group often seen in the American theater: Italians, Jews, WASPs or southerners. Karam seems to be saying, implicitly, that the Irish are less given to florid theatrical displays and more inclined to keep quiet, to say nothing about the unspeakable. Because, indeed, there is a dark family secret: a human failure.

This co-production with the GeVa means, in effect, that the time in Rochester was an extended dress rehearsal. What you see at Syracuse Stage is flawless, not one hair out of place. Sound designer Danny Erdberg and lighting designer Josh Epstein make critical contributions. Costume designer Christine Selian highlights status and age before the words are revealed to us.

The Humans is a drama of laughter and heartbreak without villains.