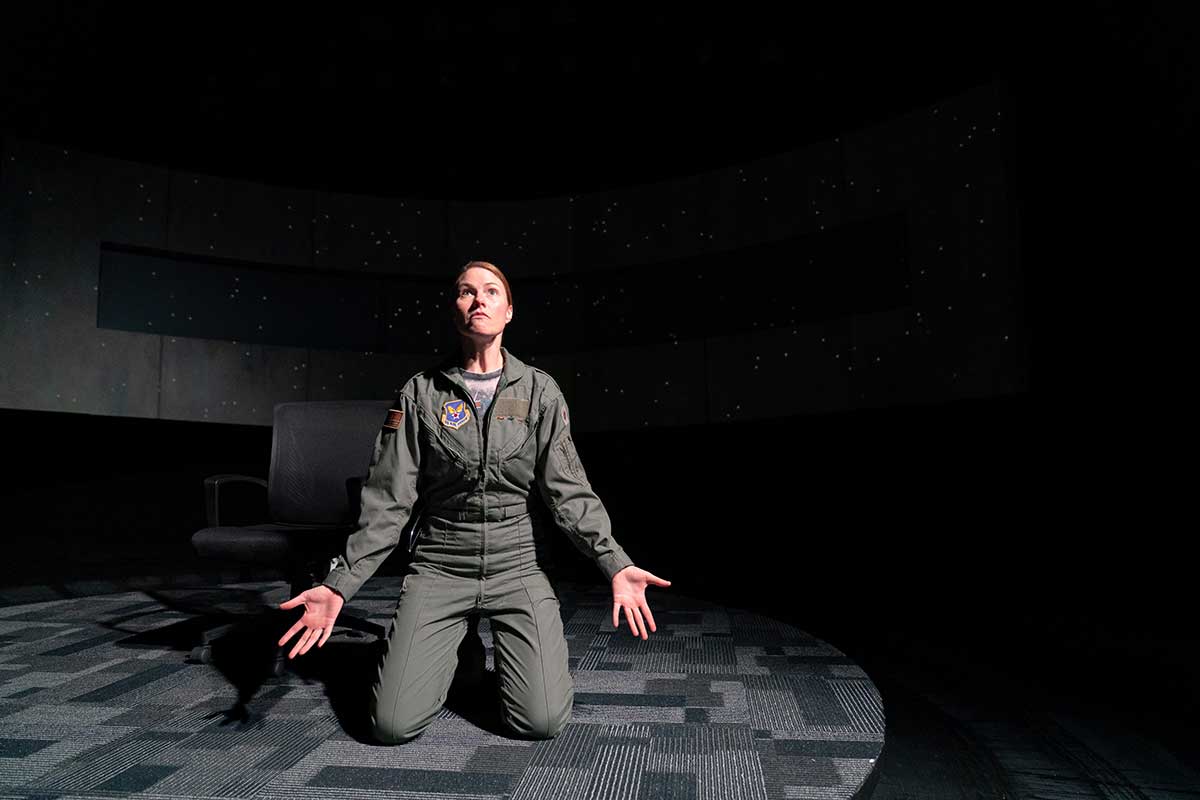 The one-actor drama about cyberwarfare, Grounded, has been a magnet for female talent. Superstar director Julie Taymor helmed the Public Theater opening in 2014, which lured Anne Hathaway to New York City for a 90-minute marathon of conflicted emotions. Composer Jeanine Tesori has spoken of turning the stage work into an opera.

After Kate MacCluggage wowed Ithaca’s Kitchen Theatre Company audiences last year with her Ironbound, she was asked what she’d really like to do for a follow-up. Her immediate answer was to play the ace fighter pilot in George Brant’s Grounded. When company artistic director M. Bevin O’Gara read the script, she wanted to work with it herself. Grounded is running through Sunday, May 5.

With so many embracing Grounded, the reader may wonder why it is not better-known, especially as it was produced widely for two years before the Public Theater opening. That’s probably because it does not attempt to flatter or exploit any segment of the potential audience.

The Pilot, who is never named, might indeed be female, but in the first quarter of the action she delights in being one of the guys, drinking beer and spouting F-bombs. She’s from Wyoming, Dick Cheney country. She finds being a fighter pilot fulfilling (echoes of Tom Cruise in Top Gun). It is being pulled away from all that, the “grounded” of the title, that precipitates conflict. And finding herself killing people remotely from the safety of Nevada is her crisis.

Gender might be a secondary theme in Grounded, written by a man, but it would be a different play entirely if the Pilot were male. The Pilot says of the flight suit she is always wearing, “This is who I was now, who I’d become through sweat and brains and guts.” Kate MacCluggage, like Anne Hathaway, enjoys leading-lady good looks without a hint of androgyny. The Pilot speaks of her delight in sexual intercourse, and desire to have a virile man in her life.

Indeed, it is her femininity that leads to her grounding: She becomes pregnant. This is before she is married, but pregnancy itself is the issue. Brant’s script puts the matter into an image we hear described. The Pilot’s husband wants to take a picture of her bare swelling belly, protruding through the flight suit. This prompts the line, “Demi Moore: Eat your heart out!” In many ways this is the paradox at the center of Grounded: the life-giver as life-taker.

Grounded could probably be performed on a bare stage with just the flight suit costume, but this Kitchen production dresses it up. At the center of David L. Arsenault’s set is a comfortable black office chair. When the Pilot is talking about flying, we are not sure why it is there, but that is where she will be confined. Superficially, she is safe from flak or SAM missiles. It is also where the Pilot faces moral challenge, and where MacCluggage shifts into emotional high gear.

Behind the Pilot are two screens, wider than CinemaScope, with a larger one enveloping horizontally a narrower one. It’s like looking at the other side of the world through an electronic viewer, not an open window. This initially feels superfluous, as if Brant’s words and MacCluggage’s interpretation were insufficient. The more these projections (from designer Ari Herzig) persist, however, the more we realize that the destruction the Pilot describes is not a fiction, even though under-reported. There is no political polemic buried in the script, waiting to catch fire. Yet we remember without prompting this was the Obama administration policy in Afghanistan and even Pakistan. The Pilot is never specific where.

Initially, the Pilot feels that fighting a war by pressing buttons is both diminishing and feminizing. She compares confinement to the chair to being in the typing pool. As she has frequently compared herself to heroic figures, she asks, “What kind of Odysseus comes home every night?” She also argues that drone warfare should not be seen as a variant of video games.

This leads to the darker part. In an airplane her targets were a short distance beneath her, but invisible and anonymous. Now the victims are on the screen, even while thousand of miles away. She presses a button and with a 1.2-second delay the weapon is fired. She can see the carnage, the body parts flying. She feels a connection with the dying unknown to the Top Gun. And she sees more of herself in the killer drone.

As previously mentioned, Grounded is not playing to a pre-set narrative. We discover along with the Pilot. She may be a highly original character, unlike any person in the news or that we can meet anywhere, but she is prescient and she grows. It’s a long, long arc for just 90 minutes.

It also demonstrates that Kate MacCluggage knows her business in asking for and fulfilling this bravura role. She’s tough and coquettish, comic and serious, irreverent and dedicated, sexy and warlike, as she finally learns the depths of dread.