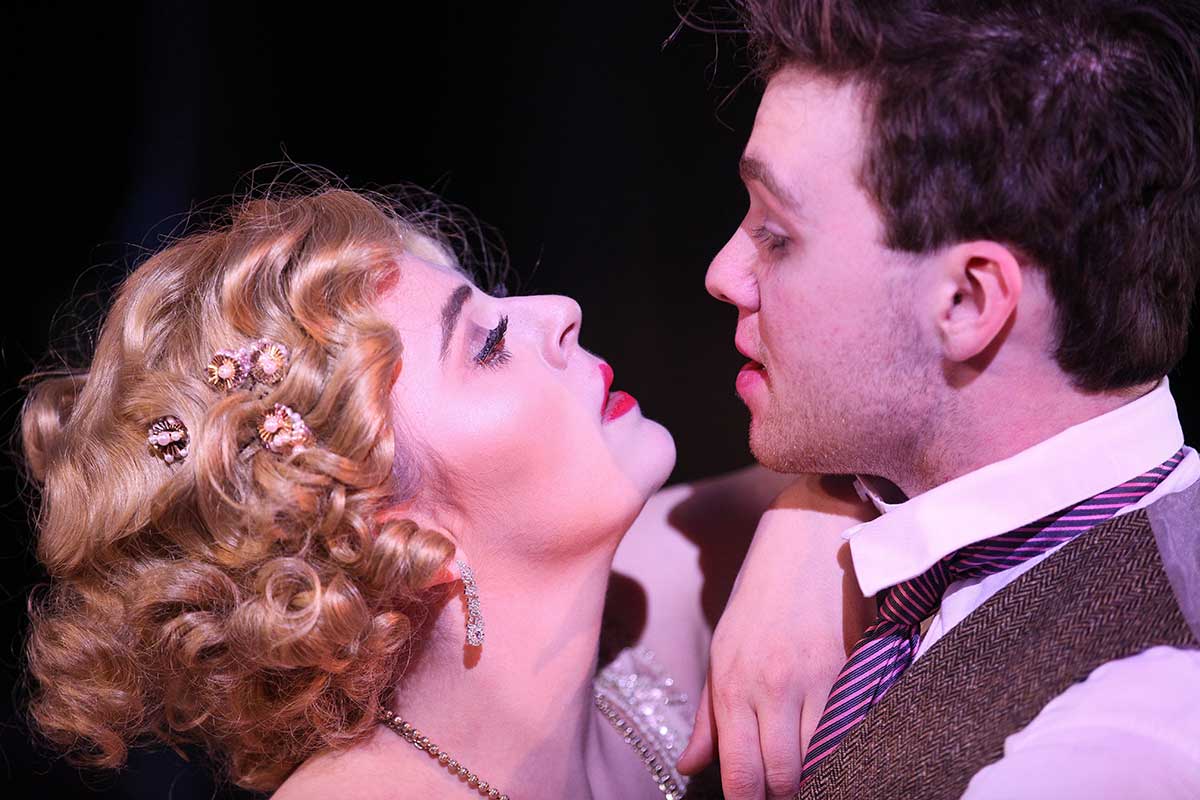 The excellence of performances in ‘The Wild Party,’ running through April 7, implies the SU Drama Department is currently glutted with talent.

Twice in 14 years at the Syracuse University Drama Department, and it’s not West Side Story, either. Andrew Lippa’s The Wild Party, running through Sunday, April 7, at the Syracuse Stage complex, is not one of those shows whose score has entered the national bloodstream. But director Katherine McGerr is reviving it because she says it will prompt students in college towns (she grew up in one before entering teaching) to re-examine the pervasive party culture.

If so, The Wild Party is a cautionary tale. It is also true that along with a role calling for a powerhouse leading lady, it spreads the wealth around equitably, with lots of big numbers for a gaggle of supporting players. 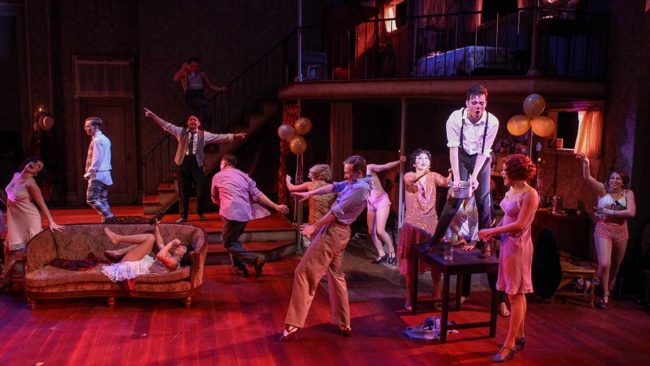 Revel Without a Cause: Excess on display in “The Wild Party” (Michael Davis/Syracuse New Times)

The current production is not an affront to the earlier one — Rodney Hudson helmed that Wild Party in October 2005 — but comparisons are inevitable. The current production reflects not just the personality of a different director — Katherine McGerr is known for Kate Tarker’s abstruse Laura and the Sea (November 2016) and Paula Vogel’s AIDS comedy The Baltimore Waltz (April 2018) — but how much the department as a whole has learned about staging musicals in a decade and a half.

The Storch Theater was designed to be hostile to musicals: no pit. So directors have been tucking musicians here and there for quite a while. McGerr puts them right on stage but behind a translucent screen. The nine performers in the ensemble, led by Brian Cimmet, are close enough to be linked to each singer but removed from all action — and yet visible. There’s still enough space for complex action, in part because Alex Koziara’s scenic design allows for a bedroom on a raised platform at stage left.

Although their names are in smaller type, McGerr has shared the labor of getting everything in motion. Andrea Leigh-Smith is cited as associate director as well as choreographer in what is more of a dance show than audiences may remember. Additionally, Alec Barbour has been brought in for fight choreography and what is called an “intimacy coordinator,” like those scenes toward the end where all the bodies are strewn decorously across the boards. Memory can play tricks, but somehow this Wild Party feels bigger, with the same music in the same space, than in 2005.

The literary property on which Lippa bases the show is Joseph Moncure March’s 1928 long narrative poem, partially based on the Fatty Arbuckle scandal, that was immediately banned in Boston. Arbuckle was a silent film comic involved in a sordid murder. Jack Kroll referred to the poem as “F. Scott Fitzgerald on Spanish fly,” while William S. Burroughs (Naked Lunch) claimed it made him want to become a writer. It also inspired James Coco’s dark comic film The Wild Party (1975). Two musical adaptations appeared in the year 2000: Michael John LaChiusa’s bust with big names on Broadway and Andrew Lippa’s off-Broadway show, the one with legs.

The Wild Party is flush with tension and chock-full of show-stopping episodes but it’s not heavy on plot. We first see the vaudeville chorine Queenie (Giuliana Augello) before the curtain, almost as a narrator. She’s looking for the right man to satisfy her, and up pops light-footed Burrs (Ryan Byrne), an actual clown as you can tell from the red paint on his nose. Thing turns sour, though, then the curtain parts and the two climb the stairs to the bedroom. His tendency toward violence scares her, and she seeks to revive the excitement of their meeting by throwing the big party of the title in her first big solo, “Out of the Blue.” 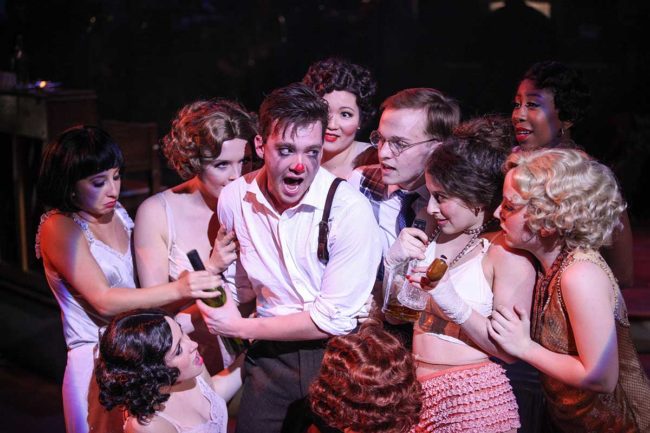 More than 20 people show up quickly, a lot to keep track of. Some get an introduction, such as long-limbed Jackie the Dancer (Joshua Keen), a character more given to actions than words. The contributions of costumer Carmen Martinez and wig designer Sarah Stark are also put to good use.

The two homosexual composers-brothers Oscar (Hayden Kerzie) and Phil D’Armano (Jack Rento) have relatively few lines and no big musical numbers, but they’re always easy to pick out. This is true even late in the second act when characters are shedding their costumes, dresses, shirts, pants and shoes.

Homosexuality, we hardly need be reminded, was a taboo subject in 1928, and there was no certain costume marker. Today we are sensitive to demeaning stereotypes. Against these demands costumer Martinez hits the mark subtly in dressing tall, imposing Madelaine True (Jaelle LaGuerre), who enters with one of several show-stopping numbers, “An Old-Fashioned Love Story.” Shortly before Madelaine’s entrance, Queenie’s friend Kate (Anju Cloud) has already stopped the show with “Look at Me Now.”

The high intensity of so many musical numbers means that the infrequent departure into lightness and novelty makes something like ”Two of a Kind,” from the thuggish Eddie (Sage Prosper Cobos) and the ditzy Mae (Kate Jarecki) stand out paradoxically.

None of this means we ever forget that Queenie is the center of the action. She appears in five numbers in the second act. After Kate’s smashing entrance, we realize that she has brought along the dignified Mr. Black (Blake Maxwell) in a three-piece suit, who will soon become Burrs’ principal rival. Black, Burrs, Kate and Queenie appear in a key number, “Listen to Me.” But Maxwell’s affecting emotiveness in several solos, such as “I’ll Be Here,” points the way to the denouement as much as any words in the script.

Directors of student productions must work with people who have been accepted into the program. The excellence of performances in The Wild Party implies the SU Drama Department is currently glutted with talent. As Queenie, Giuliana Augello, only a sophomore, was the right person in the right place at the right time. This is her chance to soar, and she spreads her wings high.