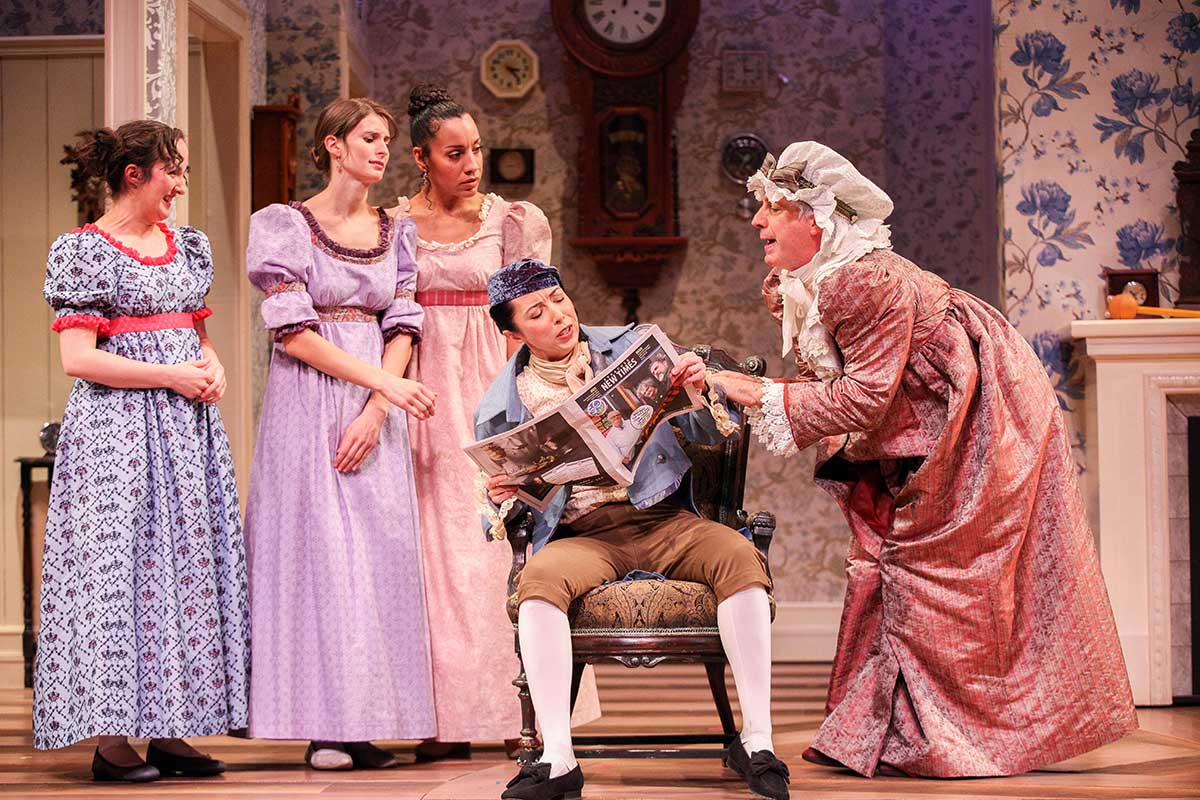 Some Janeites may find this “Pride and Prejudice” more than they wanted. But as Liberace once observed, “Too much of a good thing is wonderful.”

For authenticity it would be like staging Private Lives with Noel Coward playing Elyot, the role he wrote for himself. Well, here’s Kate Hamill, named Playwright of the Year in 2017 by The Wall Street Journal and one of the five most-produced playwrights in the United States for the 2018-2019 season. She’s performing in her adaptation of Jane Austen’s ever-popular Pride and Prejudice at Syracuse Stage through April 7.

Hamill takes two roles, as Lydia, the most rebellious of the Bennet girls, and dreadnaught Lady Catherine De Bourgh. Further ensuring the deal, Hamill’s fiancé, Jason O’Connell, who played Darcy in the premiere three years ago, is directing this production.

What’s surprising is that all that authenticity is just the opposite of a vise or a straightjacket. This Pride and Prejudice is far and away the most innovative, farcical and wildest of the three Hamill-Austen adaptations seen on the Syracuse New Times beat in the last year. Bring the playwright and her fiancé here, and they will allow all the players to cut loose.

Like other actors who became playwrights, Hamill gives us a text in which all eight members of the cast get to show off, each one to have a show-stopping moment. Or many such moments as six of the players double up on roles, often jumping gender barriers.

We are always in on the gag as some actors have the next needed costume readily at hand, changing without bothering to retreat to the wings. There’s never anything to slow the breakneck pace. Hamill’s method and director O’Connell’s method is that we unquestionably know that the “man” with distinguishing gestures in the second act was a “woman” with a very different walk in the first.

There is no secret why Hamill’s adaptations, even with other directors, have become so popular. Zillions of readers are cultishly devoted to Jane Austen. This boosted the fashion for Austen movies in the 1990s, but the books have been too clunky for the stage.

Hamill adopts the approach of the spoofers who gave us Around the World in 80 Days and Alfred Hitchcock’s The 39 Steps, by stripping down the action and having a limited number of actors take multiple roles. Only she’s not spoofing. For all her hilarity and achronology, this Pride delivers the goods in the last longish scenes. Lizzy Bennet (Angela Janas) patches up her differences with the desired Mr. Darcy (dark, cool and sexy Carman Lacivita), and the required romantic effusion pours out. 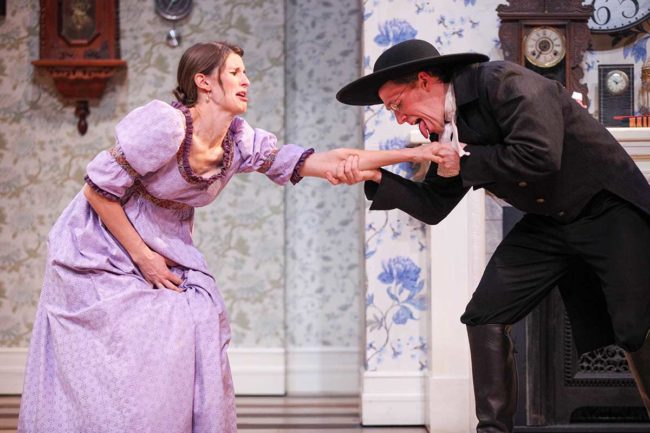 Faithful as Hamill is to Austen in her way, audiences already well-versed in the characters and plot twists of Price and Prejudice will be having more fun. Much of the energy in the opening scenes comes from fussbudget Mrs. Bennet (tall Stephan Wolfert in drag), whose interactions introduce us to the five sisters in the household. The first scene-stealer among them is tall, blonde Mary (Samantha Steinmetz), supposedly the plainest, most unmarriageable and resentful. When the first potential Bennet suitor, Mr. Bingley, arrives, Steinmetz morphs into him instantly.

Following the novel’s portrayals, the Bennet paterfamilias is initially a quiet presence who takes his time in asserting authority. In this production that dynamic is increased by having diminutive Ms. Joey Parsons, considerably shorter than Stephen Wolfert’s Mrs. B, in the role. Mr. Bennet is more absorbed with his reading, which turns out to be a recent issue of the Syracuse New Times! And his reading reveals important things about the old man. Although stern, Mr. Bennet is more hip than his noisy wife and gives critical support for Lizzy’s heartfelt decision.

Unlike the Le Moyne College production of Sense and Sensibility (March 2018) or the Hangar Theatre’s Pride and Prejudice (July 2018), in which director O’Connell played Mr. Darcy, this production completely deconstructs chronology. When the young men and women go to a ball they’re hearing disco with the BeeGees’ “Stayin’ Alive,” as a mirrored globe rotates above. Sometimes we’re in Regency England (the novel was published in 1813), as Charlotte Palmer-Lane’s eclectic costume implies much time travel as well as place travel. Mr. Collins’ (Jeff Gonzalez) black clergyman’s outfit with wide-brimmed hat was never seen in Great Britain.

Actress-playwright Hamill makes good use of her time in the spotlight, but never tries to dominate the whole show as Noel Coward usually did. The romantic lead, of course, is Lizzy, which was Keira Knightly’s role in the 2005 movie version. She may have more lines than any other actor, but relatively few of them are funny.

Instead, Hamill casts herself as Lydia, the sister we almost don’t notice until she runs off with the dastardly Mr. Wickham (Jeff Gonzalez again) in her return to the family as a kind of Regency punk. Hamill also reappears as the condescending Lady Catherine De Bourgh and temporarily blows everyone else away, as she comes on in full tigress mode. Her commands have a few echoes of Bette Davis in her prime without becoming mimicry.

Some Janeites may find this Pride and Prejudice more than they wanted. But as the pianist and aesthetician Liberace once observed, “Too much of a good thing is wonderful.”