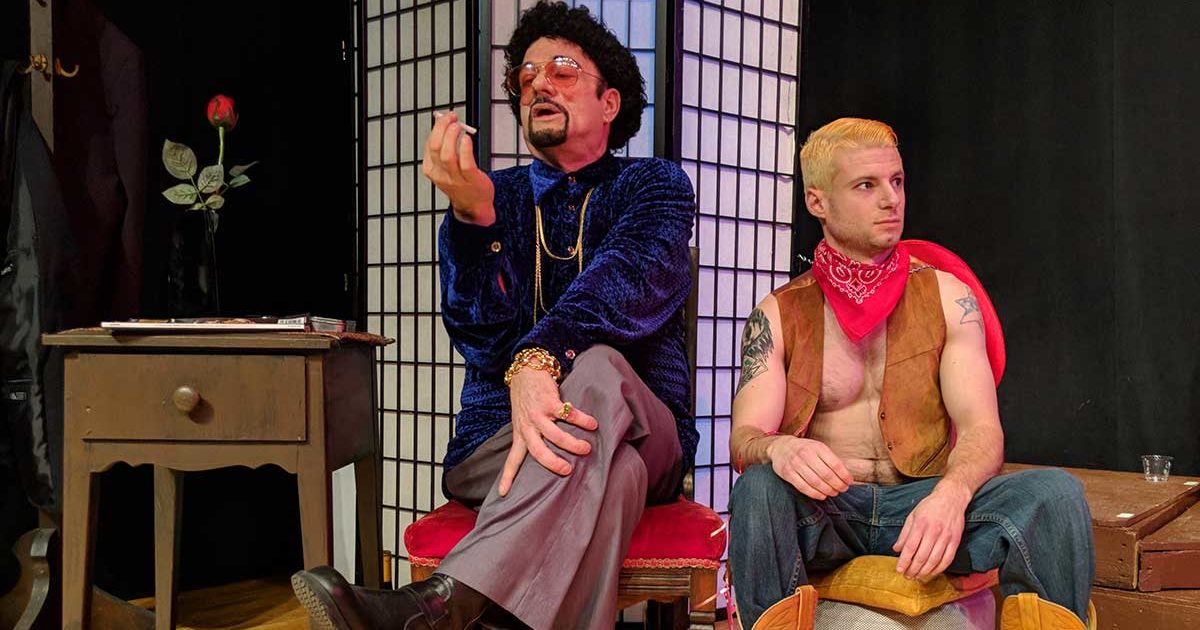 Dark comedy “The Boys in the Band,” performed by Rarely Done Productions, explores the old prevalences of guilt and self-accusation in the gay community.

One-hit wonder Mart Crowley’s The Boys in the Band honestly merits the designation “legendary” of all the stage works of the last half-century. Audiences were shocked to see a room full of gay men contending candidly about their loves, fears and desperations, even more so than by The Changing Room or Steambath with mostly nude casts, but now forgotten.

Despite the self-flagellation in Boys, the enthusiastic reception in gay Manhattan is widely thought to have emboldened the belligerent reaction in the Stonewall riots of the following year. What is most surprising in this 50th anniversary revival from Rarely Done Productions, running through Saturday, Nov. 17, at Jazz Central, is how many gags still hit the mark.

It’s a dark, dark comedy, with dialogue such as, “Wanna see a happy homosexual? Look for a gay corpse.” Although two of our best wits, Oscar Wilde (cited in the play) and Noel Coward, happened to be gay, Crowley has little in common with either of them. Instead, The Boys in the Band unmistakably derives from Edward Albee’s Who’s Afraid of Virginia Woolf, which this production beats on the laugh-o-meter, along with bitchy humor, games-playing and cruelty. Some commentators reach higher for comparison: Harold Pinter’s The Birthday Party and Jean-Paul Sartre’s No Exit.

Director Dan Tursi brings a personal authority to this production, having previously played the role of the party’s host Michael, an alcoholic lapsed Catholic who appears to speak for the playwright. Tall, hairless Jason Timothy delivers a tense and brittle Michael, whose squabbles with boyfriend Donald (Jonathan Fleischman) set the tone for two hours. Donald has fled to the Hamptons and while not wanting to return to the closet seeks to separate himself from the gay lifestyle on the Upper East Side.

Five friends are gathering for the birthday of Harold (David Minikheim, unrecognizable in a frizzy black wig), who will arrive last. Scowling, suit-wearing Hank (Jimmy Curtin) is leaving his wife to take up with irascible fashion photographer Larry (Joshua Kimball). The one black man, Bernard (Michael Dean Anderson), the “queen of spades,” must endure Archie Bunker-ish taunts, among the most dated lines in the play.

Mincing, effeminate interior decorator Emory (Michael Stephon) might irritate the other guests and would win only cringes on Gay Pride Day. But he gets more than his share of gag lines, and Stephon never fails to deliver. There are also two interlopers, Michael’s anxious straight friend, Alan (Michael Reicke), and Harold’s birthday “gift,” a sex-for-hire cowboy (scene-stealing Josh Ammons).

This revival of Boys allows us to see how prevalent guilt and self-accusation once were. Leo Varadkar, the gay prime minister of Ireland, and Jared Polis, just elected governor of Colorado, have none of that.