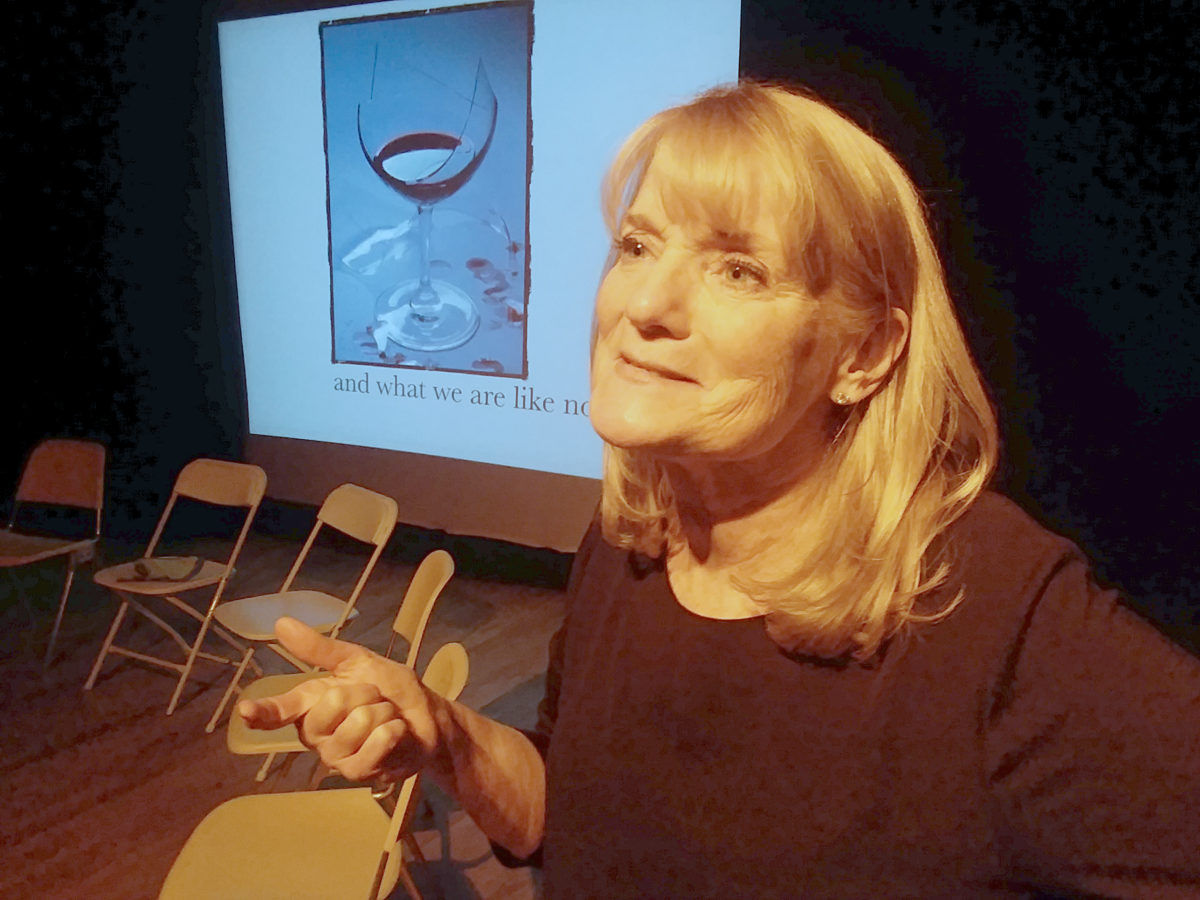 The National Institute of Health reported not long ago that although men still consume more alcohol than women, the differences in abuse between the genders are diminishing. Unchanged are our judgments of the sexes. Men might produce the occasional Foster Brooks, but most are seen as smelly boors and drunk drivers. Women alcoholics, on the other hand, are often seen as feckless victims: clueless preys of jocks and fraternity boys who get what’s coming to them.

Playwright Tara Handron has studied the phenomenon closely. She worked with 15 women for her master’s thesis at Georgetown and felt that the material was too poignant for a mere case study. Thus came Drunk with Hope, dramatizing how a dozen of the women spoke. Rarely Done Productions’ mounting runs through Thursday, May 23, at Jazz Central, 441 E. Washington St.

A longtime stage actor in the Washington area, known for comedy, Handron saw that her hourlong show demanded a bravura performance. She has been traveling all over the country with Drunk at venues both posh and modest for a half-dozen years. This Syracuse production is the first time for anyone else in the lead, and Dorothy Lennon of Rarely Done’s steering committee has taken on the challenge.

It’s an entertainment, not a lecture or a harangue, and it does not pretend to reveal the unknown. The frequent moments of humor come not at the women’s expense but rather at the recognition of a familiarity: “I know women who talk like that.”

The landmark book on women’s alcoholism is still Caroline Knapp’s confessional Drinking: A Love Story (1996). A Brahmin debutante who wrote for the alt-weekly Boston Phoenix, Knapp was compelling and individual. It’s too easy for the reader to say, “I’m not like her.” What Handron asserts is that they are all around us.

Before getting to the women themselves, Handron presents us with an incarnation of the lure itself: the Chocolate Martini, a drink most men would disdain. Lennon presents her Martini as the voice of sophistication, way ahead of once-popular women’s drinks like wine coolers. Citations of Bartles and Jaymes bring a reassuring wave of laughter, and we know the playwright and performer want us to have a good time as we travel with these wounded creatures.

Although Handron may not have intended it, Chocolate Martini brings to mind the Brandy Alexanders that seduce Lee Remick in the 1962 movie Days of Wine and Roses. Women are unlikely to engage in chugging contests or hide a bottle of the hard stuff like Nick Nolte in the 2015 movie A Walk in the Woods. The sips are sweet and small at first, but eventually they lead to the same destruction.

Another voice is an incarnation of Fear and a third is Hope, at once a woman with that name and the expectation that recovery is a plausible goal.

Handron might have worked as a graduate student researcher, but each of her monologues is structured as if it came from an Alcoholics Anonymous 12-step session. The opening is a variant on the admission, “I am an alcoholic.” The tone with which Lennon delivers that line signals the direction of the monologue. It’s different every time.

Dorothy Lennon has been a familiar face with different local outfits for some time, going back to Chris Lightcap’s Talent Company, Todd Ellis’ Syracuse Civic Theater and Appleseed Productions. She’s been serving an apprenticeship before our eyes in contrasting supporting roles, such as for Rarely Done’s AIDS-themed As Is (November 2017). Without being a scene-stealer, she has always commanded attention.

Not previously known for comedy, Lennon turns out to have a deep vein of mischief that Syracuse New Times Syracuse Area Live Theater (SALT)-winning director Tina Lee has divined. Further, Lennon rips through David Mamet-esque profanities candidly, as if they were not meant to startle.

All of Handron’s characters have names, usually stated at the introduction, but we know them more from the way they handle themselves. Do they purse their lips or chew gum with their mouths open? Class and status count more than race and ethnicity. Vanessa Adams is an African-American woman who writes a letter to the playwright, but she lives in Westchester County (“not Pennsylvania”) and sounds like a child of privilege.

She contrasts with the ebullient Barbara, who enters by proclaiming, “Life is good!” Her tone and rhetoric suggest Whoopi Goldberg playing Moms Mabley: “Give me a man! Give me a job! Give me a man with a job!” Lennon’s delivery has the heat and the timing without ever mimicking the pronunciation, which audiences would no doubt find insufferable. For all her biblical-based confidence, even Barbara has succumbed to the demon rum. Yet she ends with a blessing: “God is all! Life is good!”

Other characters appear to be selected for the contrasts they draw. In Mary Ellen, we face up to the reckless co-ed drunk people resist offering pity. Careless with the boys, she is quickly victimized into forced sexual intercourse, and seemingly shrugging it off. Worse in her telling, she’s had her breasts roughly handled, and they are now bruised and discolored. The thought of calling her rapist to court never occurs to her because of a deep needfulness that led her to drink before the crime.

Grumpy, blue-collar Denise has to work three jobs to stay afloat. Haughty, affluent Laura grew up around the corner from Lincoln Center and went to Juilliard. She contemplates suicide by jumping under a speeding bus on a Manhattan street.

Although never preachy, Drunk with Hope invites understanding and empathy and also reminds us that some of the drinkers, starting with the playwright, have been now dry for many years. Action ends with a slide show of famous faces, like Judy Garland and Whitney Houston, but also Jamie Lee Curtis, Judy Collins and a prominent Syracuse community theater actress.