Millennials. Defined as the generation born between 1981 and 1996, they are often described as lazy, entitled, impatient and lacking loyalty by specialists who simultaneously blame them for a slew of economic issues facing the United States. “Millennials are killing _____” is a funny but tired headline, filled in with everything from divorce to American cheese.

But not all millennials sit around and watch the world burn. Some just want to paint avocados.

Enter Maggie Morse, the 24-year-old artist behind Unremorseful Art, a multifaceted art brand that, like its young owner, is still growing and finding its way. New to the Syracuse art scene, she began her business last fall. With the support of friends, family and even a couple work regulars, she decided to end her 3 ½-year stint as an assistant manager for a Panera Bread shop and try to make it as an artist, a passion she has carried for most of her life.

“There’s something so freeing about art,” she said. “Art is there to put the mind in a different state. Not a lot of people understand that art is everywhere. Everything you see is some form of art. Someone designed it. 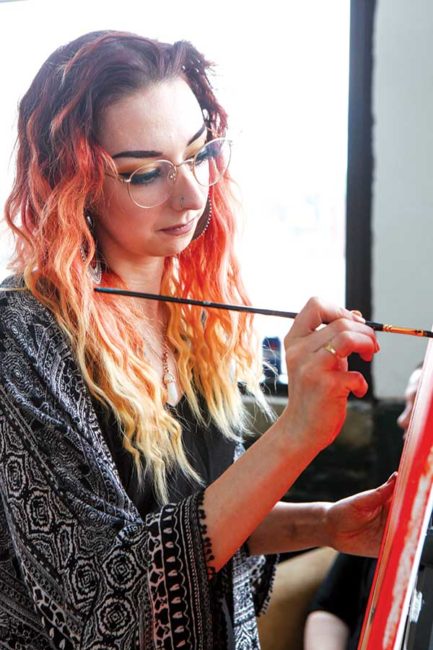 “My art may be different than the next person’s, but we can both share that passion and love, but still have our own way of doing it and be recognized as individuals.”

The beginning was literally painting avocados. “I’d take pictures of the avocados we would have cut up and paint them at home,” Morse recalled. “For the first two weeks, I really did just stay home and paint avocados.”

Morse soon broadened her horizons. She now runs a budding paint-and-sip style business, with a twist. While most businesses in this boozy industry bring groups to socialize over a glass of wine while following an instructor to recreate an artwork, Morse comes to her clients.

Framed closer to a pop-up, Morse packs up tables, easels, paints, aprons and chairs and meets people where they are: at home, a business, an office. Morse said this approach creates a more comfortable atmosphere for people who may be intimidated by the artistic aspect of the evening, even with some liquid courage in their bellies. Photographer Erin Willey also lends her lens to the program, giving clients the option to have professional photos taken of their moment.

Morse’s most recent event was a Paint Night for Paws fundraiser held May 9 at Quick Moth Studio, inside the Gear Factory on South Geddes Street. Teaming with fellow local artist Jason Vincent and photographers Lucas Adrian and Corina Foster, the event raised money for Cuse Pit Crew. The 501(c)(3) nonprofit advocates for pit bulls and other misunderstood, and often abused, dog breeds through education, training and services.

If you went to Syracuse Fashion Week, you may also have seen Morse’s art strutting down the runway. Another branch of Unremorseful Art is emerging in the fashion world with hand-painted clothing. Upcycled jackets from various thrift shops get a facelift with colorful, jewel-toned peacocks, subdued landscapes, edgy cow skulls framed in roses and more.

Morse is now selling a selection of those pieces, as well as taking custom work, through her Etsy shop. She also has a line of custom-made, waterproof, Disney-inspired shoes, which kicked off her dip into fashion.

Having grown up in Central New York and graduating from Cicero-North Syracuse High School, Morse said she’s seen a change in how the region approaches the arts — and people of her own age.

“I was going to move to Rochester,” she said. “But I have a lot more appreciation for Syracuse now than I did when I originally wanted to leave because I opened my eyes more to the downtown Syracuse area and what it has to offer. And I’m still finding new things all the time.”

The small-business owner emphasized the importance she puts on supporting those around her, from other local businesses to her fellow artists — especially those that, like herself, are under age 30. For Morse, it’s better to try and reach their dreams together than compete for business, something other downtown business entrepreneurs have echoed.

“I’m very much of the mindset that everyone is trying to get someplace, and you should always, if you can, help that person,” she said. “There’s no reason to step on people to get higher.

“At one point, these (businesses) were only an idea. But they had support, and funds, and they were able to become something. People love these places, but they don’t think of the nitty-gritty: It all started with one idea.”

That’s why Morse said she’s so thankful to every person who has come to her for artwork or commissions. The fact that someone put their dollars back into the community instead of going to a major chain has immediate, lasting effects, not only on the artist’s life, but the life of the city.

And regarding all the jokes about the “lazy millennial,” Morse is not amused. The generalizations are discouraging, not to mention usually wrong.

“I know a lot of people in my age group who want to do so much, and who have all these dreams, but it’s almost harder because you have so many saying, ‘Well, you have to do this, this and this first,’ or ‘What do you know? You’re only X years old!’” 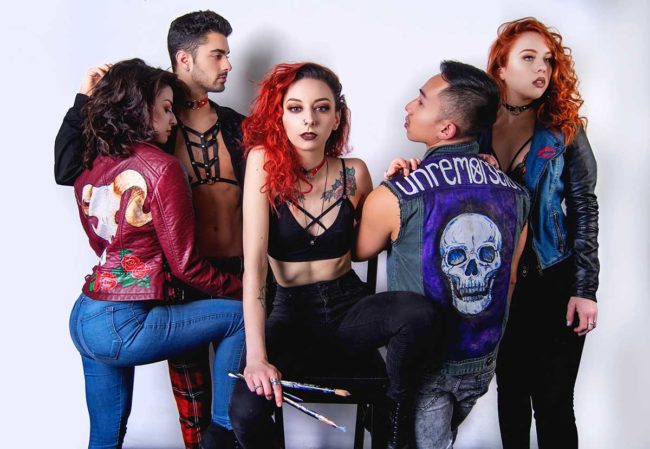 Morse (center) and several models for her custom fashion work. She debuted the line at Syracuse Fashion Week and now sells a selection online. (Photo by Jessica Montgomery)

Morse said she does miss “those pretty, regular paychecks,” but has never regretted her decision to go into art and follow what she loves, because of how much happier she is. To others thinking of taking a similar leap of faith, her advice is simple and well-known: “Just do it.”

“Branch out. Try new things. Experiment. There’s no harm in trying something new. Just do what makes you happy: Be happy.”