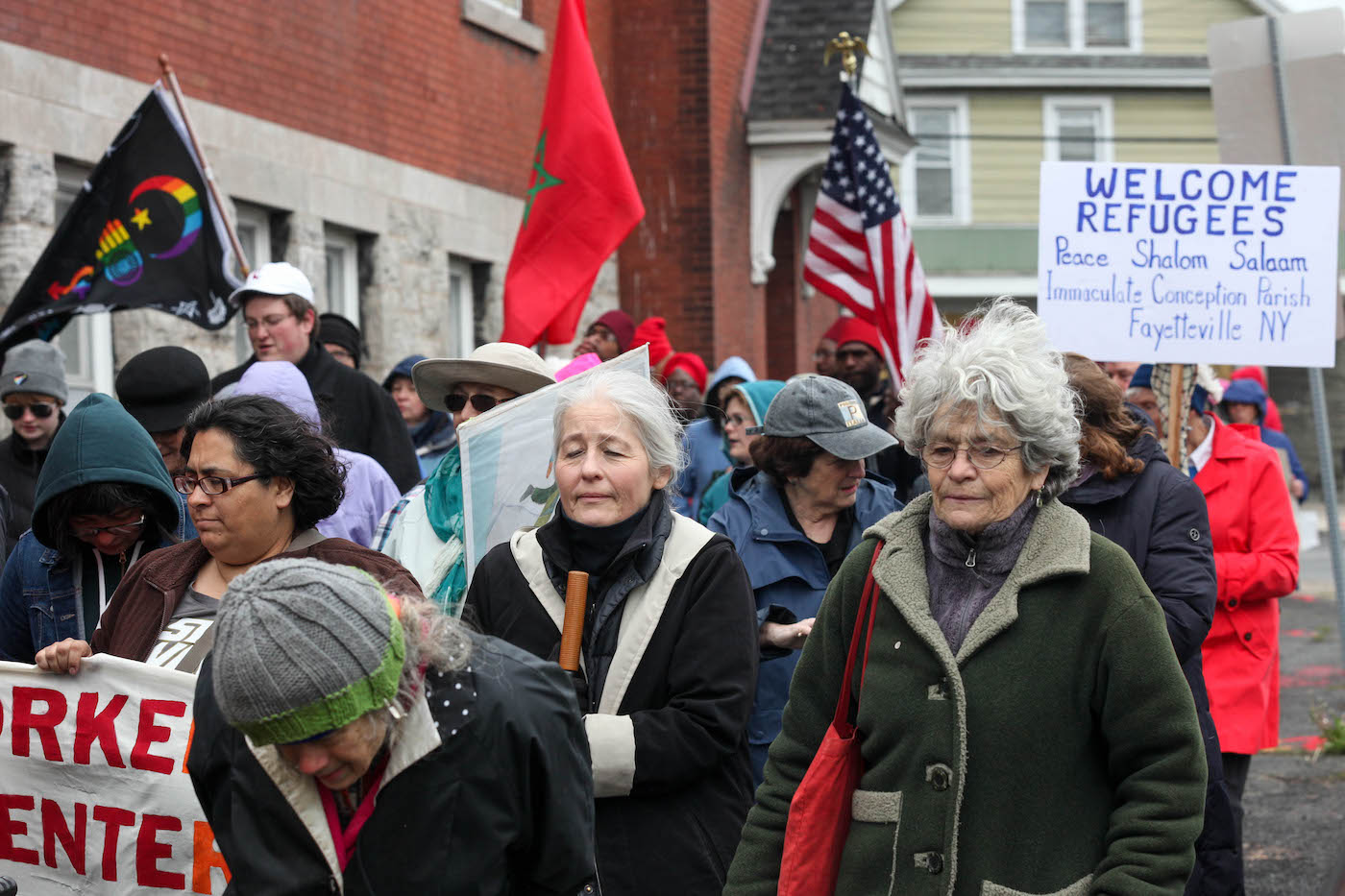 A quiet, peaceful march on Sunday, May 7, highlighted a unified message in an ethnically and religiously diverse Syracuse neighborhood: Refugees live here and refugees are welcome here.

“We recognize that refugees have built our country and will continue to build our country,” said Beth Broadway, executive director of InterFaith Works of Central New York, at the start of a 1.8-mile procession in solidarity with refugees. InterFaith Works and Catholic Charities, which each settle about 700 refugees a year in Syracuse, hosted the event.

“We live in a climate where we are hearing a lot of fear-mongering,” Broadway said. “This march says ‘No’ to all of that and says ‘Yes’ to a climate of dignity, a climate of trust, a climate of understanding and caring for one another.”

She invited refugees to lead the North Side walk and “be surrounded by neighbors.” The event was more somber than recent local rallies and marches protesting rhetoric and policies of the Trump administration. During the 90-minute walk, participants chatted quietly, introducing themselves in numerous languages.

Refugees waved to people in homes and businesses along the walk. Toward the end of the walk, as people were crossing Butternut Street, a motorist yelled, “Get out of here.” 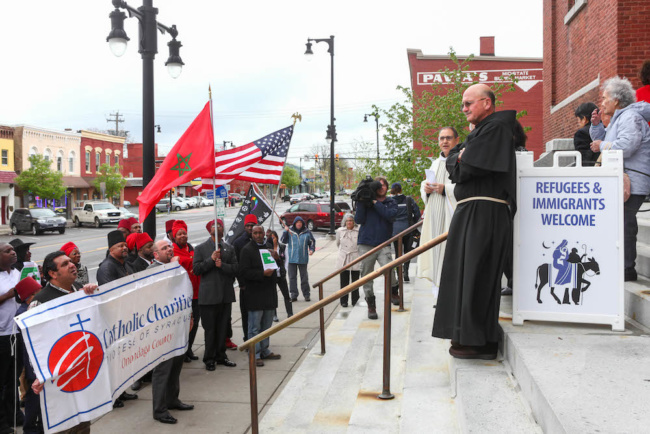 The North Side was once home to mainly Catholic and Protestant churches. The refugee procession reflected the community’s growing religious diversity, with participants including several Christian congregations, Jews, Quakers, Sikhs, Buddhists and Muslims. Walkers passed longstanding Italian bakeries as well as newer neighborhood additions: an Asian grocery store and a halal shop, which sells food that adheres to Islamic law.

During the procession, walkers made four stops: the Syracuse Nepali Church (the former Friedens United Church of Christ) at 1501 Lodi St.; a Nepali/Burmese worship site at North McBride and East Division streets; the Franciscan Church of the Assumption at 800 N. Salina St.; and Masjid Isa Ibn Maryam (the former Holy Trinity Church) at 501 Park St.

At both Assumption and the Nepali church, leaders shared prayers and told people they were welcome to visit the churches.

Masjid Isa Ibn Maryam (Mosque of Jesus the Son of Mary) operates in the former Holy Trinity building, which the Syracuse Diocese closed as a Catholic parish in 2010. That congregation highlights the local and national shift from predominantly white, Christian communities to more diverse communities including people of color and many immigrants from Muslim-majority countries.

At the mosque, Yusuf Soule translated (from Arabic) the Fatihah, the first chapter of the Quran and the most common prayer in Islam. “I seek refuge with God from Satan, the outcast,” he said. “All praise and thanks to God. Lead us to the straight path.”

After the prayer, Soule said, “The masjid is open to you anytime.”