Redhouse to hold the fourth installment of its annual fundraiser.

The annual Rockin’ the Redhouse is returning for its fourth year, taking place Friday, March 11, celebrating community arts and fundraising to continue the organization’s educational programming.

“You’ll hear these bands only at this event,” said emcee Nick Caplan, radio personality from sponsor The Dinosaur (103.9 PM). Most of the company collaborations are one-and-done, formed specifically for this event. 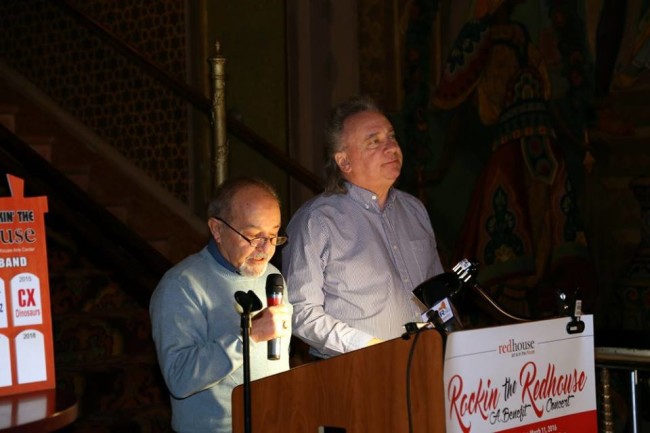 Bill Hider (left) and Mike Featherstone of The Rockin’ the Redhouse Committee talk about the upcoming fundraiser. Photo by Jack O Bocchino.

The CX Dinosaurs are an exception, and they can be seen at a variety of community-centered events and fundraisers throughout the year. They’ve also been named best band twice in the last three years of the fundraiser. Three judges will determine which band wins the 2016 crown, consisting of Joe Whiting, Kevin Dean and Katrina Tulloch. The winning band gets to choose its own prize: A live performance at Red House Arts Center or a six-hour recording package courtesy of SubCat Studios.

CXtec performer Mike Featherstone said this event is fun competition. “We all razz each other the whole time,” he quipped, giving insight into the behind the scenes. Rockin’ the Redhouse was emphasized as simply a unique experience for all to enjoy. He added, “It’s open to the public … and you’re going to see a lot of great musicians.” He acknowledged the challenges of having to sell tickets and having to promise to bring people through the door.

The Redhouse is looking forward to another successful year. “We had a great concert last year, and we expect to have another again,” board President Bill Hider said.

Last year, over $10,000 was raised for the organization. “The proceeds go directly toward our educational programming,” said marketing director Samara Hannah. She added there will be plenty of door prizes, and ticket holders will be given an opportunity to sign up for a free one-year membership to the Arts Center. A Breedlove electric acoustic guitar, a donation from Beat Street Music, will also be auctioned off.

“This event really shows how committed people are to the local art scenes and education,” Hannah added.

George Rossi
Syracuse ‘Probably In’ NCAA Tourney, According to CBS
To Top