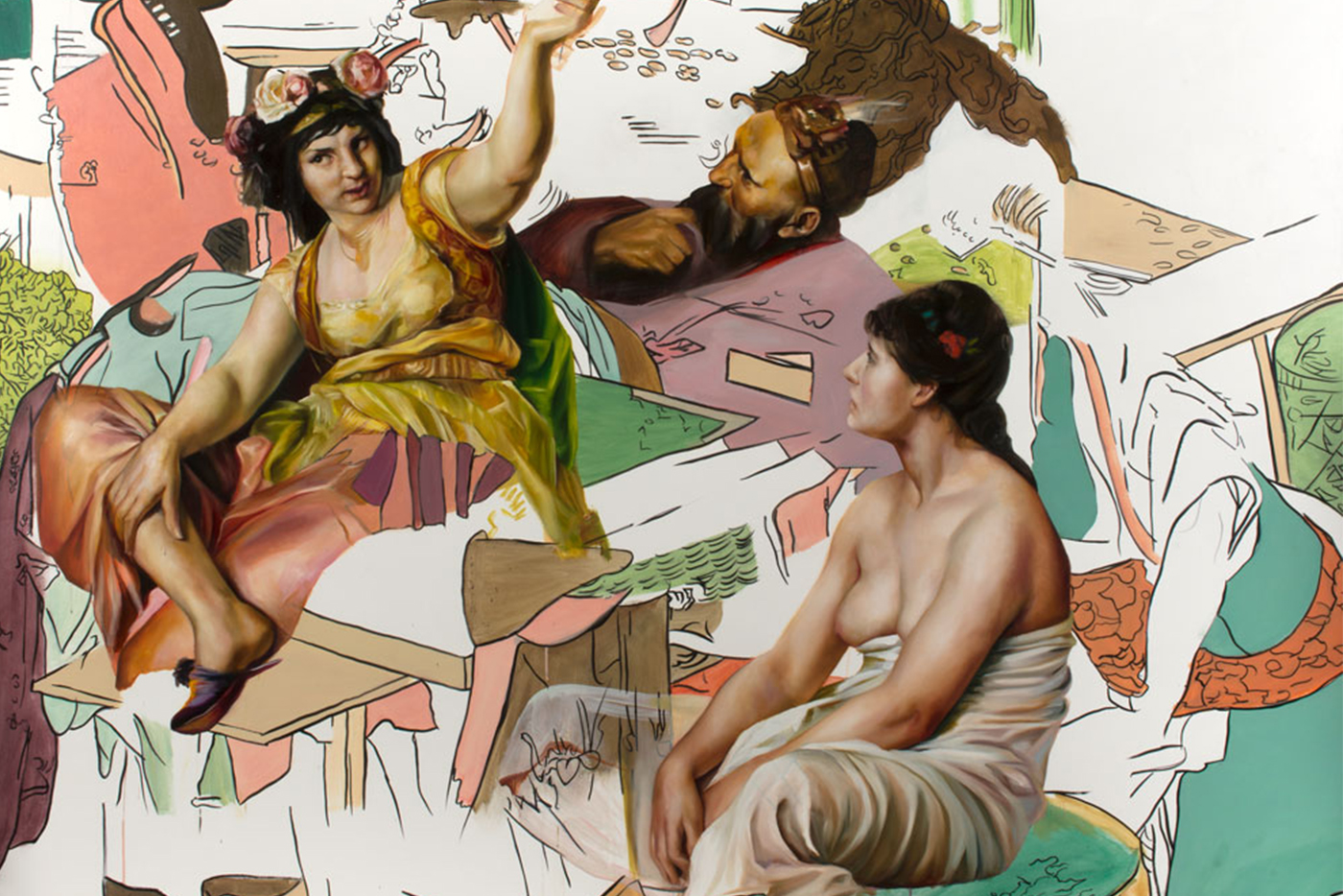 The Everson Museum of Art’s new show returns again and again to notions of gender, identity and power, to depiction of women in art and other media, to assessing change and possibilities for further changes. Angela Fraleigh: Between Tongue and Teeth, drawn mostly from works created during the past 12 years, encompasses large paintings, small portraits and a few porcelains paying homage to Adelaide Alsop Robineau, an important figure in the Arts and Crafts Movement.

Several works reference Baroque and Rococo paintings, of the 16th and 18th centuries respectively, in which women typically appeared as decorative elements or as objects of desire, as, for example, maidens pursued by satyrs. Fraleigh has painted female figures much in the manner of Renaissance paintings, but placed them in a drastically different context.

“Carried by Voices” portrays two nude women accompanied only by gold leaf that runs through most of the painting. On one hand, the gold leaf provides a garish touch. On the other, it helps create a visual environment emphasizing the women’s role as protagonists, not secondary characters. “Oil and Silver,” meanwhile, portrays three female figures partially concealed by metal leaf or robes. Artwork from Angela Fraleigh’s Between Tongue and Teeth show.

In addition, the exhibit displays a series of larger paintings exploring similar themes. “Through the half-drowned stars” depicts four women in a garden full of lush vegetation. Fraleigh poured paint on the canvas, mostly obscuring one woman’s face and body. It’s not clear why the quartet has come together; the narrative is ambiguous by design.

Another painting portrays three women whose relationship to each other is unclear. This not only challenges viewers but also fits into Fraleigh’s general discussion of narrative. She presents many of her female subjects with heads turned and cropped faces, glancing away from viewers. That’s part of her critique of superficial narratives.

Yet in “All the stories I have heard stand silent in the space beside me,” Fraleigh moves in a somewhat different direction. This work, which spreads out over three panels, depicts women from several generations, three of whom are seen with a child. It seems to speak of a utopian vision.

On a gallery wall, “No field ever felt the sky, it never fell” communicates a sense that life on our planet is far from utopian for many people. Fraleigh, a fine figurative painter, has portrayed a hippo under attack from dogs, an alligator and other animals. The scene, full of combat and devoid of mercy, focuses not on an animal kingdom but on an aspect of human life.

This is a large exhibition, and it samples various projects completed by Fraleigh. She did a series of portraits depicting women’s heads from behind. That approach dictates that viewers won’t see the subjects’ clothing and make judgments about social status. The artist was reflecting on a time when most women, regardless of social position, had difficulty owning property or making independent financial decisions.

Between Tongue and Teeth also displays a selection of more recent artworks. A group of eight portraits depicts Matilda Joslyn Gage, an influential advocate for women’s rights; Julie Briggs, a British suffragette; Pretty Flower, a Haudenosaunee woman, and others.

Beyond that, there’s a series of five recent paintings that again play with realism and abstraction. One work uses vivid figures and graphics to portray members of a harem and a sultan. And look for “Once you have tested flight, you will walk the earth with your eyes turned upward,” a fine painting.

Between Tongue and Teeth demonstrates Fraleigh’s ability to paint with high energy, to dip into colors ranging from green and gold to red, purple and blue. Most of all, it focuses on her role as a storyteller. In some instances, that means retelling stories seeing women as limited at best. In others, the artist invites viewers to consider new narratives and possibilities. Even as she continues delving into representations of women centuries ago and today, Fraleigh pursues new directions and connections with viewers.

Also at the Everson is the multimedia exhibit Marie Lorenz: Tide and Current Taxi, which chronicles her journey of more than 500 miles along the Erie Canal and the Hudson River last summer. There’s a display of two rowboats made by Lorenz, as well as a video documenting various moments on water: observing daybreak; getting the boat into the water; keeping a safe distance from a freighter; an oar gliding through the water; arriving at the George Washington Bridge; and celebrating the journey’s end in New York City.

Tide and Current Taxi finishes its run Dec. 17 while Between Tongue and Teeth wraps Dec. 31 at the Everson Museum of Art, 401 Harrison St. Gallery hours are Wednesdays, Fridays and Sundays, noon to 5 p.m.; Thursdays, noon to 8 p.m.; and Saturdays, 10 a.m. to 5 p.m. Admission is $8 for adults, $6 for seniors and free for children ages 12 and younger, and active members of the U.S. military. For more information, call 474-6064.