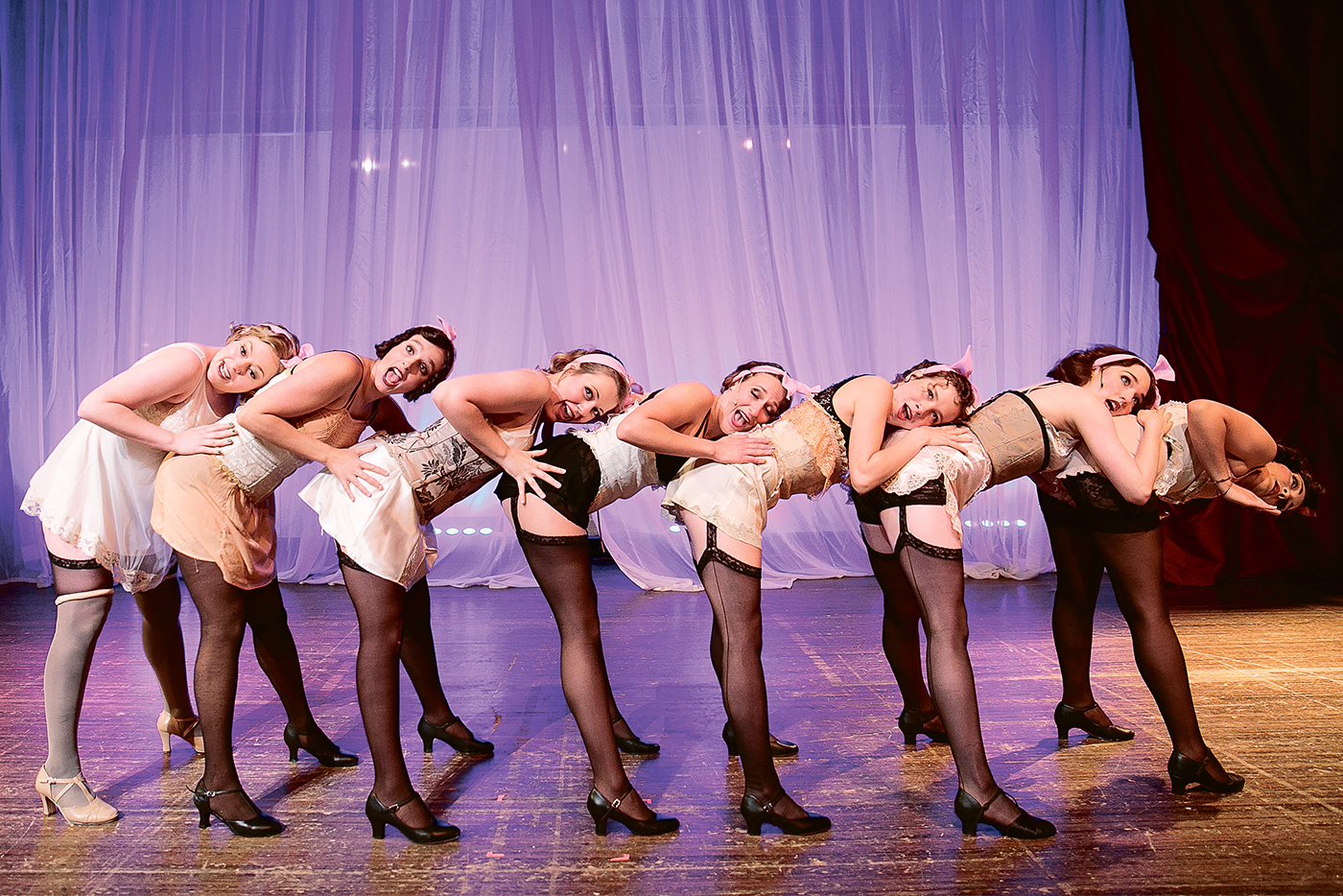 The Syracuse Summer Theatre Company is set in motion with Garret Heater’s “Cabaret.”

If some of the faces look familiar that’s because the company is a reincarnation of Garrett Heater and Michael Penny’s Covey Theatre Company that folded last summer. It’s not that Covey wasn’t usually pushing the envelope, but this rambunctious rethinking of Cabaret really wants to rattle your timbers. And your garter belts.

Now 50 years old, Cabaret has already been more malleable than any other major musical. Songs were added and subtracted during the initial run in London (where a young Judi Dench was Sally), in Bob Fosse’s 1972 movie (which threw out 50 percent of the original), and any of a dozen radical revivals. Producer-director Heater wants you to forget every other face ever associated with the show, such as Alan Cumming, Joel Grey and Liza Minnelli. In starting afresh, Heater appears to have gone back to author Christopher Isherwood’s Berlin Diaries (published 1939), when the Weimar hedonism of nine years earlier had vanished and all the bestiality he feared was coming to pass.

The key to grasping what Heater is doing is his staging of the title song, which comes second-to-last in the second act. The subplot romance of fruit-vendor Herr Schultz (Bill Molesky) and spinster landlady Fraulein Schneider (Kate Huddleston) has failed in heartbreak. American writer Cliff Bradshaw (C.J. Roche) has come to realize he’s been duped by the Nazis and has denounced them. Sally Bowles (Sara Weiler) has traded her fur coat for an abortion. And just as Nazi thugs drop Cliff’s beaten body at her feet, Sally breaks into song.

Everyone in the audience knows the lyrics, old chum, and getting us to be rewired to hear them differently is Heater’s accomplishment. There has been a tendency in other productions, probably influenced by the movie, to see Sally’s big number as a kind of show business anthem, a brave defiance in the face of jackbooted killers. Here our emotions are pulled in other directions. The overwhelming note is pathos: Sally may have loved her libertine life, but it’s gone now and she faces oblivion.

We cannot bear to return entirely to the Sally Bowles character created by Isherwood because she is talentless and self-deceiving. That incarnation exists in the non-musical version, John Van Druten’s play, filmed as I Am a Camera (1955), with Broadway great Julie Harris as a kind of twerpy Sally. Isherwood lost control of the story, and we are looking for something more exciting now.

Sara Weiler’s Sally can sing and has all the sexual energy of a reckless child. Nuanced, she is no fool and seems to know what’s she’s doing but does not care. Blessed with a wicked, side-glancing eye and a husky voice, she makes one wonder if the youthful Judi Dench might have done it this way.

Complementing Weiler’s Sally is C.J. Roche’s forthright Clifford, the would-be novelist from Pennsylvania. Even though he’s the center of the action, he is often denied much excitement. Not so here. Roche’s first-act solo, “Why Should I Wake Up,” often underplayed, nearly stops the show. Because Isherwood was so assertively homosexual, there’s often some directorial ambiguity in handling his sexuality. Here he is bi-, but not curious. He goes to bed with Sally but also steals kiss from Bobby (Donovan Stanfield).

Conspicuously not stealing scenes is the Emcee himself, played by director-producer Heater. He might be wearing lots of makeup, but he’s not an insinuating cadaver or a demonic freak. Sometimes Heater’s Emcee comments on scenes from the BeVard balcony high above the stage. Other times he blends into a scene; when he dons a red wig and net stocking over shaved legs, he joins the Kit Kat Girls in the kickline, often getting his heels as high up as theirs.

Heater’s casting calls mix admired veterans and compelling newcomers. In his first appearance since his exile in Florida, Bill Molesky gives us an absolutely heartbreaking Herr Schultz, the fruit vendor who insists he is German first and only incidentally Jewish. Never letting a line go to waste, Molesky touts tiny Italian oranges as the avatars of romance. In yet another directorial innovation, Heater has gentle Schultz suffer the depredations of Brownshirt vandals before being driven out.

Kate Huddleston as Fraulein Schneider glows in several musical numbers, especially her bereft “What Would You Do?” in the second act, and does a nice turn as the prudish landlady gets caught in late-night hanky-panky. Tall, elegant Julia Berger is both alluring and hilarious as the professional woman Fraulein Kost, who takes in boarders by the hour, some of them perhaps relatives. Pale, lean newcomer Nic MacLane delivers one of the most-sinister-ever interpretations of Ernst Ludwig, the Nazi agent.

To guarantee quality, Heater has called in strong collaborators, including choreographer Jodi Bova-Mele, whose “Two Ladies” is possibly the naughtiest ever seen on a local stage, and the superlative music director Bridget Moriarty, leading an ensemble of six. Audiences will always keep coming back to Cabaret’s score, which enchants with its conscious references to Kurt Weill in the 1920s.