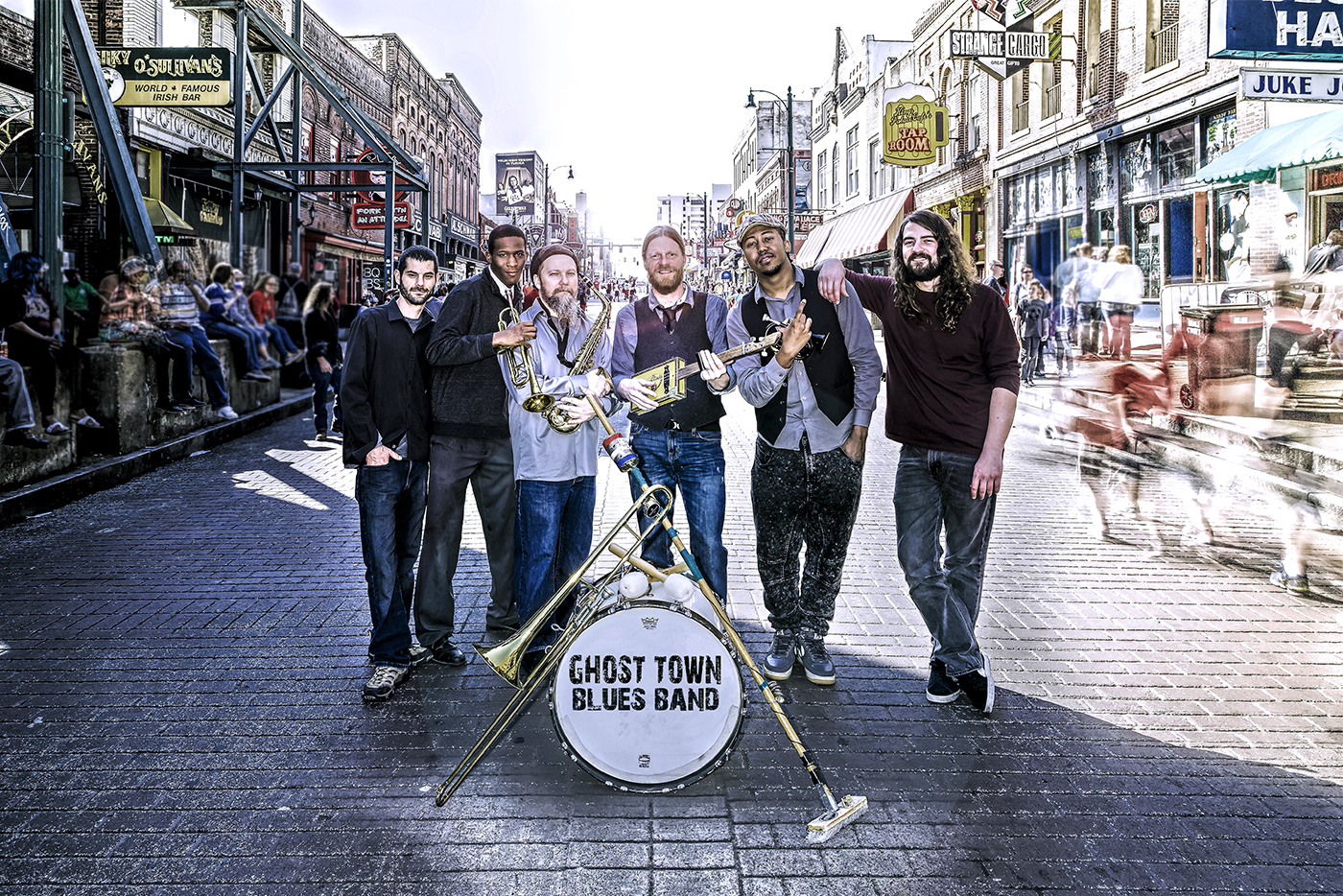 This month the Ghost Town Blues Band will play everywhere from Texas to Canada to Florida. They’ll also manage a stop in Norwich as part of the free Summer Concert Series at East Side Park on Thursday, July 21, 7 p.m.

The Memphis-based group won the hearts and ears of local listeners at the August 2015 Chenango Blues Festival. Ghost Town marched through the crowd and onto the stage to deliver powerful originals plus much-loved covers from classic bands like the Allman Brothers. In the past year, they’ve been getting more notice and more gigs.

“It’s tiresome to say the truth,” says lead singer and guitarist Matt Isbell. “Everybody thinks we’re really lucky to travel, but sometimes it’s eight- to 15-hour days, sometimes it’s 23. We hop out, play a two-hour show, or a 45-minute set, and don’t even stay in a hotel. We just get back in the van and travel. It’s fast-paced. We need a coffee dispenser in the van.

“We called our old van the Memphis Train,” Isbell continues, “because we’d have a train of cars behind us on hills.” Their new van, the Dark Horse, is a big, black Sprinter attached to a big, black trailer and, so far, it keeps on truckin’.

Despite the hectic schedule, Isbell is proud of his band’s accomplishments. Before starting Ghost Town in 2009, he was part of a 1980s cover band that cleaned up playing corporate gigs — but it sucked the soul out of Isbell’s musicmaking.

“It was great money, but it was killing me,” he says. “Then my mom passed away in 2008 and it was a real ‘ah-ha’ moment. It made me realize life is pretty short and I should do what I want to do. I quit working for other people and started a blues band.”

Ghost Town began with Isbell, drummer Preston McEwen and a bassist. They started playing for tips on Beale Street in Memphis, and soon started meeting other musicians also working the drag.

“Some of the other guys (now in the group) were playing with other bands, but we’d always be on break at the same time,” Isbell says. “We were always the younger guys on the street, so we gravitated toward each other and thought, ‘We should be working together.’ Everyone else was playing ‘Mustang Sally,’ but we could be playing something different. Why play ‘Sweet Home Chicago’ when we could do something cool?”

“We’re best friends,” Isbell says. “He had been living in Colorado for the past 18 years, but we’ve been writing songs over email and the phone for years. And I just said, ‘Dude, you gotta be in our band.’ He and I have such a cool musical relationship. I learned how to play lead guitar from him and he learned how to sing from me.”

Although Orr became a part of Ghost Town last spring, the others have been working the streets for years and constantly changing what they do to find creative ways to draw people into the music.

“We didn’t like starting shows with no one inside the bar,” Isbell says. “So we’d start outside and play a few marching band tunes, then we’d march into the club and people would follow us.” They incorporate that same tactic into their festival shows, like last year’s Chenango set, and the people still line up behind them.

Isbell has also carved a niche with his company, Memphis Cigar Box Guitars, which specializes in custom-made Delta instruments and bottleneck slides. “I’ve made and sold 366,” he says. “People got interested, I started making them and I didn’t stop.”

He has also participated in a short film documentary, Once There Was a Cigar Box, that has garnered nearly 15,000 internet views and went on to win awards at international film festivals. “It’s just me making guitars in my garage,” Isbell says. “But there’s a side story in the film that follows my philosophy in life: You only live once. Do what you love.”

“It’s a song about a ritual,” he says. “It’s about tying that (drinking) to a stone and throwing it in the Mississippi River. It’s something concrete to put with quitting alcohol. I’ve been clean for two years now.”

Ghost Town Blues Band continues to work the business in the old-fashioned way — with long rides, wild shows and dealing with the unpredictability of that lifestyle. “It’s been an evolution,” Isbell says. “It’s not like one day it was this and now it’s this. It was a building process and it doesn’t feel so different. We’ve been working so hard. Some days are awesome and some days are hard, but I’m doing what I signed up for. And that makes me happy.”

“Don’t listen to anyone tell you you can’t do it. After seven years with this band and a solid seven before that, and seven years of learning before that, I’ve learned how to make a nice career out of it. I work my ass off every day, but I’m happy and I’m fulfilled and I wouldn’t be happy working in a cubicle, waiting for the weekend to come to play music. First thing on Monday, I play music and make guitars.”