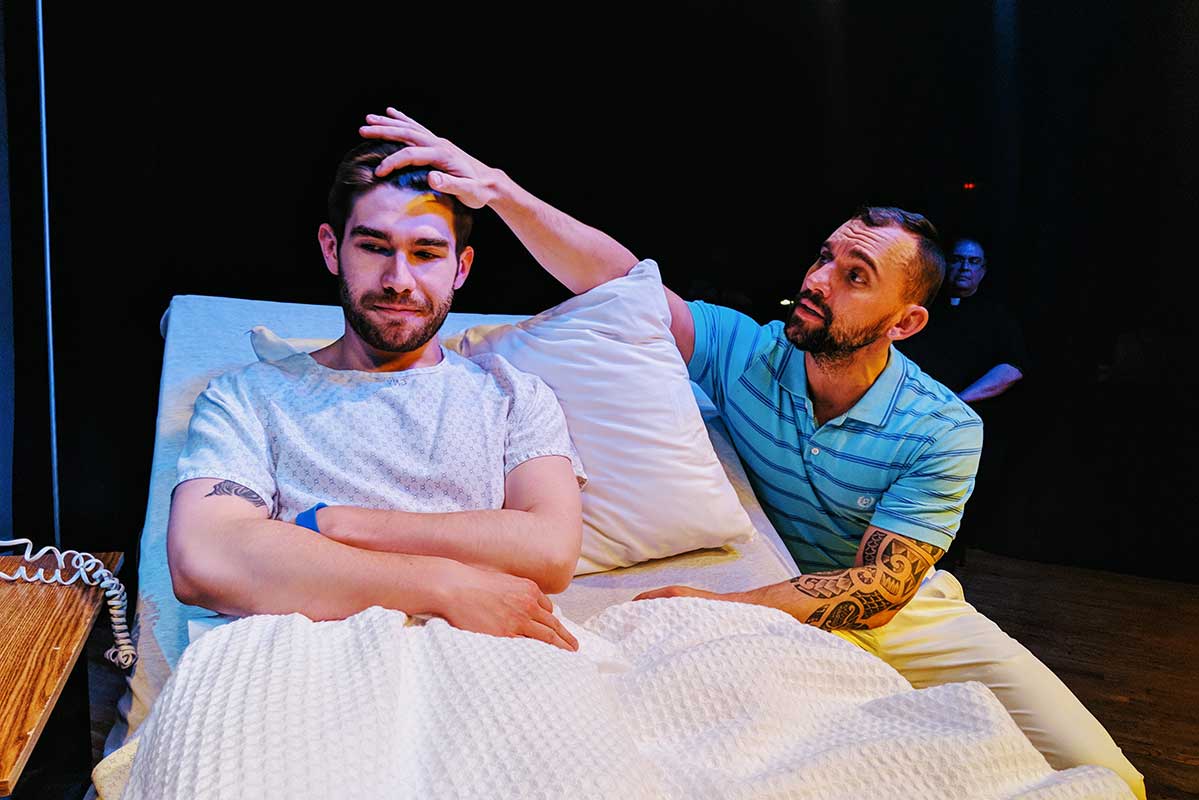 Composer William Finn was never one for mere boy-meets-girl musicals or even boy-meets-boy shows. His best-known works, Falsettos (1992) and The 25th Annual Putnam County Spelling Bee (2005), are hardly conventional, but they do not ask us to deal with the horrors of sudden death from a brain hemorrhage or arteriovenous malformation.

That was Finn’s real-life experience, which he addressed through the healing power of art, in a book co-written with James Lapine and his own compositions and lyrics. Finn’s musical A New Brain — a Rarely Done production running through Friday, June 21, at Jazz Central — is never flippant about mortality, yet he can’t resist telling us about the ordeal while sprinkling in some laugh-out-loud humor.

Finn and Lapine’s fictional persona has a rhyming name, Gordon Michael Schwinn (Jonathan Fleischman), a talented but sarcastic composer suffering writer’s block while struggling to produce ditties for a deadline. His employer is a tyrannical and exasperating children’s entertainer called Mr. Bungee (Benjamin Wells), who dresses in a frog costume. While Gordon is having lunch with his agent and pal Rhoda (Riley Mahan), he collapses on the floor, just after the “Calamari” number and before “911 Emergency.” An overbearing waitress (Ceara Windhausen, who will appear in another role) signals that not everyone he meets will be dripping with empathy.

Not every figure is saintly or heroic. His principal doctor (T.J. Cravens) is a self-regarding indifferent healer, improving the patient almost despite himself. We find ourselves divided between the nurses, on one side the “thin” (heartless?) Nancy D. (Windhausen again) as against the chubby (cuddly?) Richard (Danny Monroe). A better comforter is the Roman-collared minister (Gennaro Parlato), who is undeterred that Gordon is Jewish.

Although each is given either a solo or a duet with Gordon, they also combine to make a piquant ensemble in “Gordo’s Law of Genetics.” Their fantasy production number, “Eating Myself Up Alive,” really does stop the show.

Reaching to his heart while Gordon’s body is on the mend are his lover Roger (Joshua Kimball) and his still-young mother Mimi (Krystal Wadsworth). In a cast filled with impressive voices, they deliver the more affecting emotions, beginning with Wadsworth’s torchy duet with Gordon, “Mother’s Gonna Make Things Look Fine,” and even more with “The Music Still Plays On.” Kimball scores big again and again, especially in duets with Gordon, including “Just Go” and “Time.”

Unexpected plot turns make A New Brain more than a hospital drama with music. The impish and irritating Mr. Bungee turns out to have something worth hearing to demand that Gordon embrace childlike wonder. Further, we do not see that the enigmatic but sweet-faced bag lady Lisa (the wonderful Michele Lindor) is Bungee’s mirror image.

A New Brain is a beautifully staged egalitarian show in which nearly everyone gets a star turn. All of which enhances the effectiveness of lead Jonathan Fleischman in the finale, “I Feel So Much Spring.”

Mellowing Out: Driftwood takes artistic risks with new album
Review | CNY Playhouse’s ‘Rumors’ is a labor of love
To Top