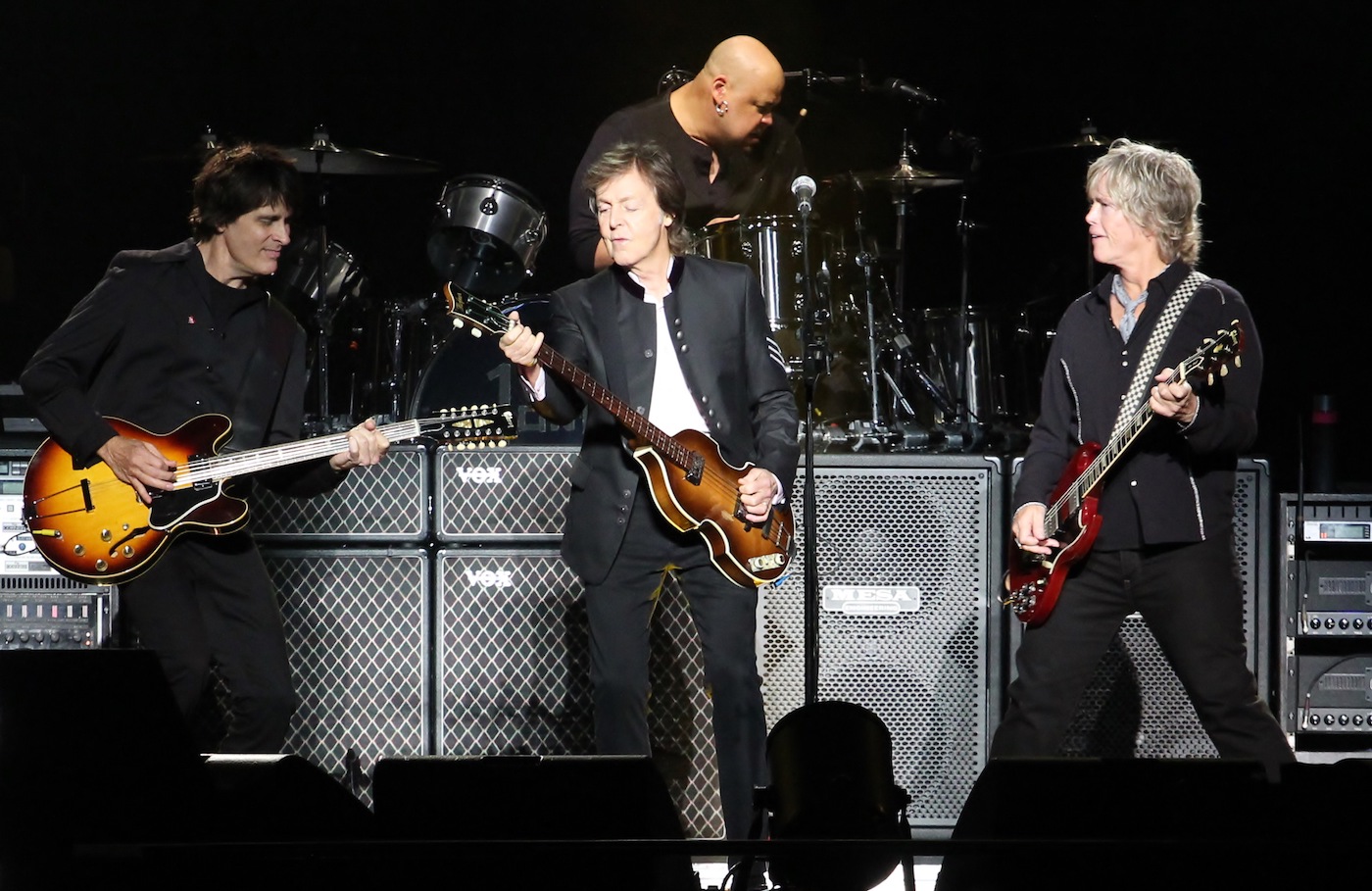 Beatles fans will get their fill of hits at Paul McCartney’s Dome concert.

Editor’s Note: We don’t want to spoil the party for you, so this Paul McCartney concert preview does not include a setlist from previous shows on this tour. If you’d like one, visit www.paulmccartney.com or www.setlist.fm.

Sure, a Paul McCartney concert includes memorable songs from his days with Wings in the 1970s and as a solo artist since the 1980s. And those songs alone were enough to get McCartney inducted into the Rock and Roll Hall of Fame. 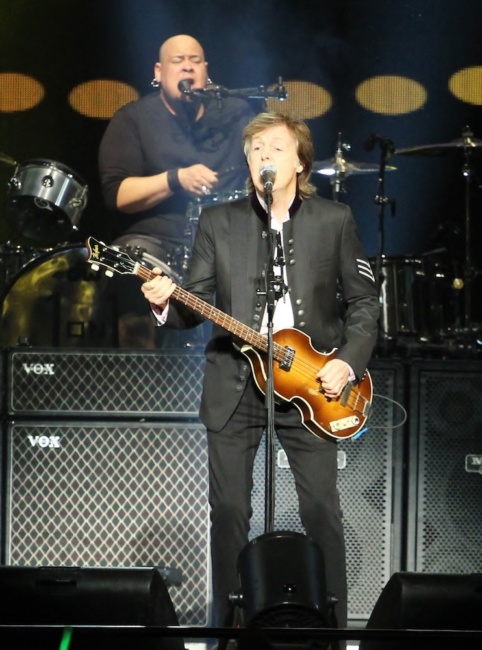 McCartney and his first-rate band will bring their “One On One” tour to the Carrier Dome on Saturday, Sept. 23, 8 p.m. As of early this week, some obstructed-view tickets were available through Ticketmaster, and tickets above face value are available through reseller outlets such as Stub Hub and Vivid Seats.

It’s McCartney’s first concert in Syracuse. In 1993, he was scheduled to play at the Dome but cancelled the show, either to get ready for a Fox TV-televised concert in Charlotte a few days later (the official explanation) or because of lagging ticket sales (only 20,000 sold), or both.

To get a firsthand look at what we missed in 1993 and what we’ll see and hear Saturday, we traveled to New York City for his Sept. 15 sold-out show at Madison Square Garden. As with any McCartney concert since the late 1980s, the three-hour show was dominated by Beatles classics, as 28 of McCartney’s 40 songs were from the Fab Four.

(Note: McCartney’s shows on this tour have generally included 38 or 39 songs. On Sept. 15, he played an extra medley that he dedicated to John Lennon (“A Day In The Life/Give Peace A Chance”) and an extra song with special guest Bruce Springsteen (you’ll want to YouTube that one). It’s unlikely The Boss will show up Saturday, but you never know).

McCartney’s Beatles songs ranged from the very first song they put on a record when they were still The Quarrymen to songs from the final album they recorded in 1969, Abbey Road. Overall, he played songs from 10 different Beatles’ U.K. albums, plus singles that were not put on those albums but included on the U.S. albums.

Clearly, at age 75, McCartney can’t hit the high notes like he did in the 1960s or ’70s. But his voice, which sounded strained during last year’s concerts, was stronger at the Sept. 15 show. And his band, featuring Paul “Wix” Wickens on keyboards, Brian Ray on guitar/bass, Rusty Anderson on guitar and Abe Laboriel Jr. on drums, is a musical match for anything The Beatles recorded. Fun fact: McCartney’s current band lineup has been together longer than The Beatles: 15 years and counting.

Obviously, we would all love to see John, Paul, George Harrison and Ringo Starr on the stage together again, even for one song. But McCartney is the next best thing, playing songs from the late 1960s that The Beatles never played live because they stopped touring in 1966. And even if John and George were alive today, and even if they did perform publicly, it’s doubtful they would embrace The Beatles’ legacy in the same way as Paul, the Beatle who most loved to perform live.

Whether it was his personal and legal feuds with the other Beatles, his drive to succeed with Wings, or his need for a break from the craziness of being in the world’s biggest band, McCartney distanced himself from The Beatles in the 1970s. His two major tours of the decade — a world tour with Wings in 1976 and a U.K. tour in 1979 — included only a few Beatles songs.

But in 1984, McCartney made a bad movie, Give My Regards to Broad Street, with a great soundtrack that included several remade Beatles classics and reached No. 1 on the U.K. chart. By 1989, McCartney was ready to tour again and he further reclaimed his Beatles past by playing several Beatles songs, including never-before-played-live songs such as “Hey Jude” and “Sgt. Pepper’s Lonely Hearts Club Band.”

In all of his tours since then, the bulk of McCartney’s setlist has featured Beatles songs, although he has released several critically acclaimed albums during that time. In Manhattan, McCartney acknowledged that he’s fully aware of which songs are most popular with the audiences, because they’re holding up their phones during those songs.

“When we play new songs, it’s like a black hole,” he joked. “But we don’t care: We’re going to play them anyway.”

He then played two songs from his most recent album (New, released in 2013) before finishing the final third of the show with mostly Beatles songs.

But it’s not just the music that screams Beatles. At Madison Square Garden, McCartney weaved in several stories and anecdotes about his old band. We won’t give too much away, but if you’re going to the concert you’ll hear about The Quarrymen’s first record, George Martin’s impact on the first Beatles single, and how John and Paul helped turned Mick Jagger and Keith Richards into the next John and Paul.

Along the way, McCartney played a song for his current wife, Nancy, and his wife of nearly 30 years, Linda. He played loving tributes to Lennon and Harrison, and he worked in a story that involved Jimi Hendrix and Eric Clapton. Who else could mention Lennon, Harrison, Jagger, Richards, Hendrix and Clapton and have it not feel like serious name-dropping?

In the end, the music makes the show and whether you’re a diehard Beatles fan or just a fan of music, you’ll appreciate that these songs are being sung and played by the same man who wrote and recorded them over the past 55 years. And throughout the show, perhaps rock’s most melodic bass player will expertly play several different instruments, from a piano to a very Hendrix-like electric guitar to a ukulele.

As the Madison Square Garden show went past two hours, a young woman who was dancing to a Beatles favorite yelled to no one in particular, “I’m so happy right now!”

Parking: Remember the mess with the Billy Joel concert? Arrive early. Parking is available in the Manley and Skytop lots ($20 per car) with shuttle service.

Gates open: 6 p.m. There will be high security at entrances so be prepared to empty your pockets.

When will it start? There is no opening act (Beatles/Wings/McCartney music will be played while photos/images are shown on the screens). The concert is scheduled to start at 8 p.m., but most shows have started about 8:30 p.m.

Here’s a look at Paul McCartney’s previous U.S. tours with The Beatles, Wings and as a solo artist: