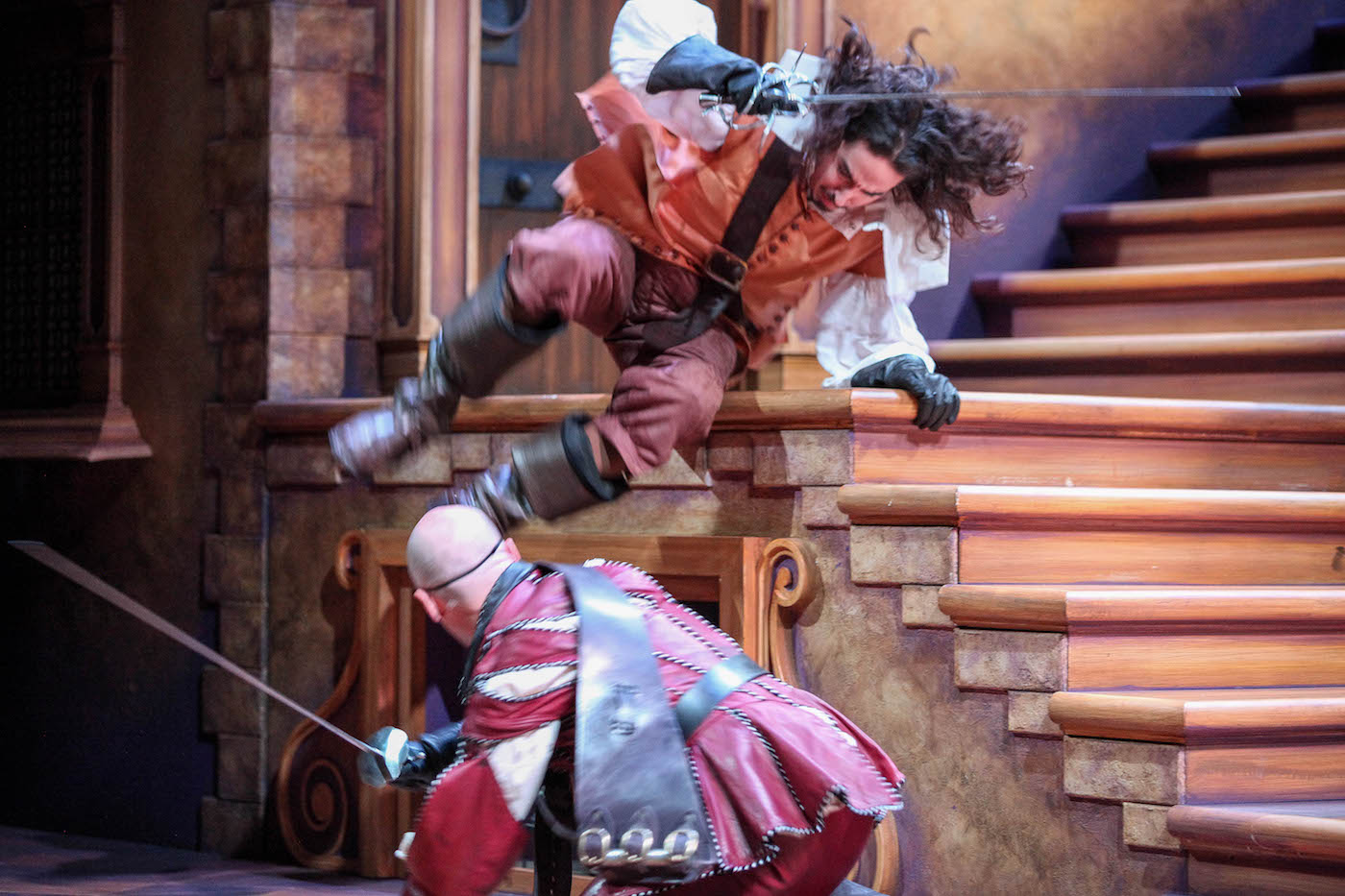 Syracuse Stage’s seasonal kickoff production of The Three Musketeers is so bursting with color and energy that you think it’s about to leap over the footlights and jump into your lap.

Well, it does. Before the rise of curtain a student actor is giving the familiar turn-off-your-cellphones speech, but in French, when a gaggle of noisy players in costume, later identified as The Mob, hurtle up the aisle and bound on the set to knock her down and shut her up.

This is artistic director Robert Hupp’s first display of his hand, both in picking what we see and then directing it. Lots of fun, but so much to pay attention to.

Hupp is giving us a fresh take on a familiar property. Alexandre Dumas’ The Three Musketeers (1844) is one of those rare books that keep being read without being assigned in class. Most of us can name the three guys in the title more easily than we can name the seven dwarfs, as we follow the ascent of country boy D’Artagnan (Travis Staton-Marrero) toward making it into the Musketeers.

But Catherine Bush’s new adaptation favors a light touch. In an interview published in the program, Bush claims never to have looked at any other adaptation, which may be true. Ever since Richard Lester’s antic two-part film versions (1973 and 1974) with Michael York, however, audiences expect comedy to be mixed into the adventure.

Bush complies. No five pages of the novel can deliver as many laughs as Bush’s script can in five minutes. She retains Milady de Winter (Nikki Coble) as one of the coolest, most gorgeous villainesses of literature, but deletes two acts of misogynist bravado from D’Artagnan.

Hupp prefers his spectacles to be light-footed. The script has 20 scene changes and 40 speaking roles of several social classes. These zip by in two hours and 15 minutes in the text Bush wrought from a 700-page episodic novel with a cast of thousands and endless twists and turns.

Stanley A. Mayer’s massive set allows for rapid scene changes (here in Carmelite convent, there removed to London), and Marianne Custer’s costumes are designed to knock your eyes out. This being France, even the beggars are chic.

Director Hupp deftly helps us keep all 40 discrete, and, candidly colorblind casting is useful toward this end. Although the Musketeers themselves are cited in the title, they are not overly favored with lines. Hupp helps to define the amorous Aramis (Seth Andrew Bridges), the sensible Athos (Matthew Greer) and the earthy Porthos (Chaz Rose) through body set and nuance so that we feel we know them better than Bush’s words allow.

King Louis XIII (John Long) signals that he is effete, lackadaisical and powerless in about 30 seconds. So we know that he has ceded power to authoritarian Cardinal Richelieu (Mitch Tebo), whose swagger carries a sneer from Hollywood legend Billy DeWolfe.

The director recommends symmetrical movement. Local favorite Anthony Salatino has guided choreographic staging, obviously necessary when as many as 25 players may be crowding a scene. D.C. Wright has been imported from Illinois to stage the fight scenes, whether with fists or swords. Admittedly, sometimes the chin heaves while the knuckles have not yet arrived, and we are never worried that actors will be injured in the name of similitude. Further, Travis Staton-Marrero turns out to be something of a gymnast and responds to some of the fisticuffs with backflips.

Nonetheless, some of the fight choreography will unsettle audiences for being gender neutral. This is another way of saying that female players also get smacked in the kisser and knocked on their prats.

On the evidence of this production, director Hupp will reshape a character to fit the qualities a performer brings to it. Take, for example, Claro Austria, who plays six roles, one of them Planchet, servant of de Reville (Jason Collins), the crusty Captain of the Musketeers. Austria, a graduate of the University of Washington, is of Asian heritage and a bit shorter than many men in the cast.

When one bully refers to him as a “Pipsqueak,” Austria flies into high dudgeon and slashes his arms in a series of martial arts commands before dispatching the miscreant. This anachronistic break through the fourth wall goes over fabulously with the audience.

One of director Hupp’s innovations may have no precedent at Syracuse Stage, and that is an original prerecorded score by Ryan Rumery. He brings sterling national credits and has already composed more than 200 Broadway, off-Broadway and regional theater productions, as well as independent films and HBO.

The score is perfectly delivered here, sometimes in thunder, by sound designer Jonathan Herter, a personal friend. Rumery’s idiom is contemporary, with no chi-chi attempt to sound “French” or any echoes of earlier composers like Francois Couperin. No musicians are credited for the performance.

Later in the season Hupp will direct the dark musical Next to Normal, where he may have different things to tell us. As he has chosen The Three Musketeers to go first we can settle for these messages. The production directly addresses the problem facing all regional theaters: How to draw in new audiences while not driving away the loyal but shrinking current audiences.

Dumas may not be Balzac or Hugo, but this is still a classic. Production standards are so high you can take snobbish out-of-town visitors to see the show with pride. The Three Musketeers is accessible and subtler than we have let on, as well as irreverent. It is also irresistible.