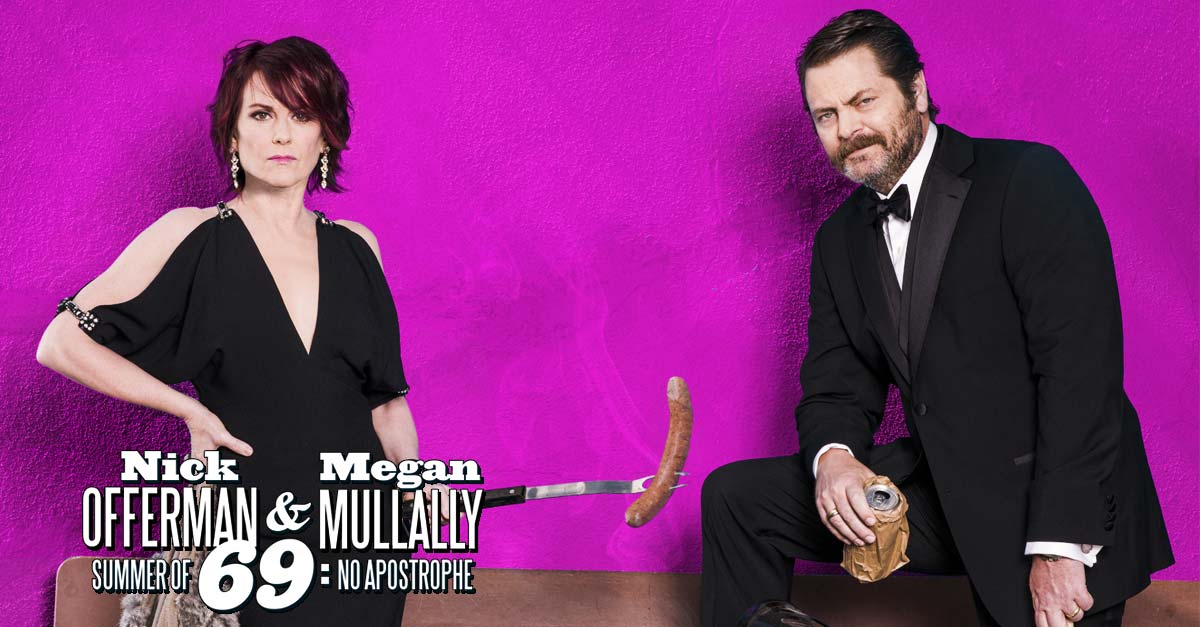 The evening was graced by notable vocal nuances. Offerman’s distinctive monotone delivery flavored his onslaught of dad jokes. Mullally’s higher-pitched snark, referencing her character from Will & Grace, couldn’t be dismissed.

Opposite deliveries did attract, and they often met arm-in-arm with deadpan remarks.

“Look to your left,” said Offerman, who is most noted for his portrayal of Ron Swanson in Parks and Recreation.”Look to your right. You’ll be going home with one of these people tonight.” The audience was reminded life is naturally funny, but it wasn’t as important as maintaining a spicy sex life.

He made a valid point. The mood was already set. Dim light bulbs replaced candles. Couples populated the crowd. The pre-show mood setting background music consisted of Dr. John, Morphine, Tom Waits and Lou Reed. However, there was a lack of sexy saxophone. Still, a chance to go home with someone was inevitable.

Luckily for me, I wasn’t sitting next to anyone. My bittersweet placement put me two seats away from the nearest person on my left. There was a whole stretch of empty seats to my right. Thankfully I wasn’t closer. This is a huge tell for heat seeking comedians looking out into the audience, however, I stayed unnoticed.

Expected sexual comments filled the opening titular number. The songs alluded to penetration, and one most noteworthy mentioning a wristwatch’s melting off in a (vagina). How can you forget the A-Lister roasting ditty about glittering butt holes. The sexual drive and lack of tension between the comedians wasn’t subtle. While the content was definitely inappropriate for younger fans, the caliber of the material did not sink to fart jokes. Nor was it as verbally extravagant as Dr. Dirty.

Aside tongue-in-cheek comedy prophesying the reign of President Donald Trump and nailing Jesus for his second coming, the husband-and-wife duo tactfully seasoned in sentimental elements. Romanticizing didn’t ferment long enough to sound sappy or preachy. In fact, the show made me like the couple even more and envy their 13-year relationship. 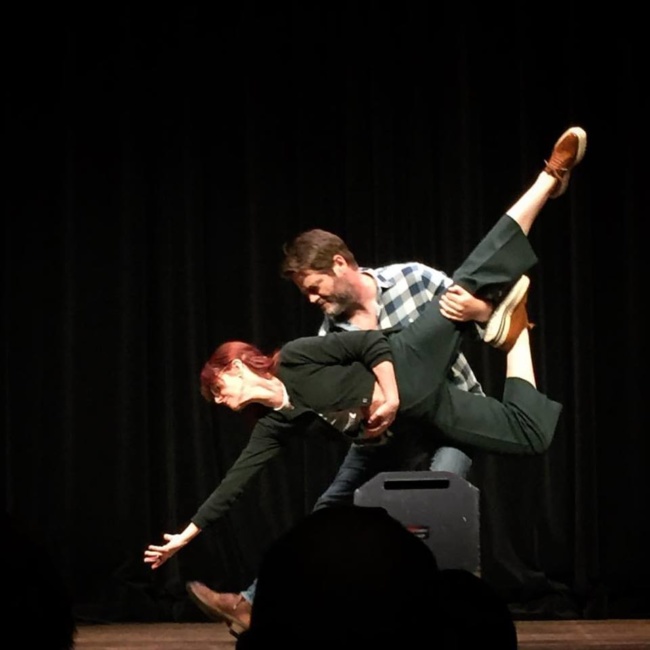 The premise was to be frank about the burning passion they have for each other. They talked about being separated due to work, and they mentioned their love for writing letters to each other. Even when one goes to the grocery store, they write letters to each other and sent via carrier pigeon. Love between them is so fervent, therefore, they’d even steal an Uber, get arrested, break free, drive off in the Uber and eat the carrier pigeon.

The non-celibate celebs did take the focus off each other, and they asked for volunteers. A selected couple jumped on stage to play a newlywed game, thus proving their like-mindedness. Offerman, who stated he is an online ordained minister, performed an abridged ceremony to marry the couple.

The sitcom stars then discussed their own vows, which were supposedly performed during their ceremony. The vow song began typically, but the audience anticipated the catch. The sentimentality about being dedicated and confident about their relationship was distinctly conveyed. They sang the meow-filled chorus about dressing up like cats to “make murder.”

The show did get serious, and the topic of disputes was not avoided. Arguments could impede healthy development in any relationship, and cue the reminder to take life seriously when it has to be. Picking battles and listening are also important.

An elephant in the room was revealed. The audience was asked to be rational, but to pick sides and decide who was right.

The couple found the perfect location to build a home. However, two oaks blocked a pleasant view of the valley. Offerman decided to not cut down trees despite being a talented woodworker or “tree murderer,” the title whimsically referred to him per his wife. The reluctance of the bearded man’s-man, who isn’t afraid to get his hands dirty, cost them the parcel of land. By applause and hollering, the audience decided Mullally’s stance won the argument.

Instead of opting for on-stage make-up sex, save Offerman’s awkward shirt unbuttoning and removal during the final dance sequence, the two separately sang numbers they wrote for each other. The burly Offerman sang a lovey-dovey song, referring to his wife as the queen of fairies.

Mullally went second. Her husband said she was more talented than he, and it made no sense for his following.

Cue the show-stopping sentimental “My Pop,” which refers to the nicknames they’ve given each other. Her vocals were on target with her ukulele accompaniment. The audience sat quiet; we were hypnotized.

However, both are not fantastic singers, and at times they missed harmonies. They erred with lyrics, and they had moments where they sang two different words. More often than not he was very flat, and sometimes she was high-pitched. Neither apologized, and they shouldn’t have to.

The evening felt like a family gathering, and Mullally and Offerman let Syracuse patrons in on personal jokes. The stars sat on chairs, but it seemed as if they were on a couch. The Civic Center stage was their living room, and they hosted the party. Since it wasn’t their house, they proved to be the couple everyone wants to invite over. They’re the types to bring the best snacks, and break out the best games.