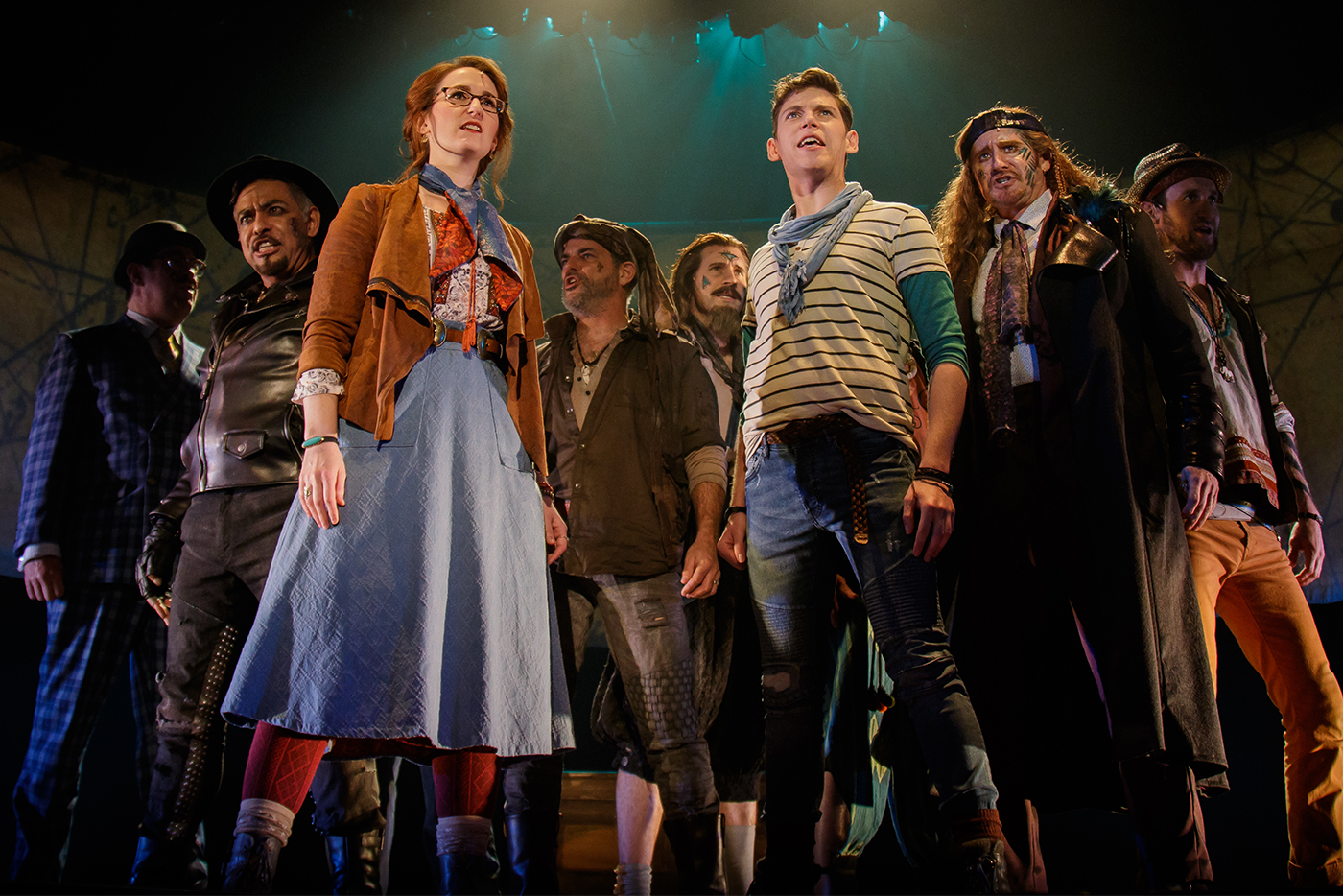 Spoiler alert: In the new musical Treasure Island: A New Musical for a New Generation, running through Sept. 10 at Auburn’s Merry-Go-Round Playhouse, Long John Silver neither has a parrot on his shoulder nor does he say, “Arrr-rrr-rrr.”

Co-authors Brett Smock (who also directed) and Carla Vitale subscribe to the informed view that works with lasting appeal for young audiences, like the non-musical Peter Pan or The Wizard of Oz, benefit from profound subtexts. Such shows imply much more than their surfaces say. A clever director will tease them out even as we go along for a fun ride. Vitale and Smock want us to see that pirates were not mere scallywags who incidentally robbed ships but rather ancestors of the humorless brutes who wrecked the economy in 2008.

Robert Louis Stevenson’s Treasure Island, published in 1883 and serialized in 1881-1882, is the very model of the Boys’ Own Paper adventures and has been adapted countless times. The most memorable is the 1950 Walt Disney version, in which Shakespearean actor Robert Newton introduced the “Arrr-rrr-rrr” growl in a mock Cornish accent, not anticipated in the book.

Vitale and Smock want us to look at Silver anew as the hired sea cook who betrays his employers. The curved metal panel around his calf nicely implies the peg leg, saving actor Bart Shatto much grief. But gone also is the ambiguity and charm, a possible father figure, that made all the earlier Long Johns so indelible, the inspiration of a chain of seafood restaurants.

The desire to banish Disneyfication is delivered with a vengeance in director Smock’s instructions to scenic designer Czerton Lim and costumer Tristan Raines. No ship. No island. No ocean. All action is staged on a raked disk, possibly meant to imply a gold coin such as a doubloon. The minimal props are augmented by images projected on a kind of Cinerama-curved screen made of sewn-together sheets, possibly discarded sails.

No costumes are time-bound. Several characters wear fedoras, a sometime Smock signature, while others are in punkish black leather. The uniform of Captain Smollett (Patrick Oliver Jones) seems more fitting for the Galactic Empire than the British Navy, while the loud plaid shirt adorning Squire John Trelawney (John Paul Almon) might have been worn by a Rotarian in a W.C. Fields movie. All these do indeed draw us away from later Victoriana, but they add to a sense of confusion when bullets fly in the second act.

All of this layering of risk upon experiment works very well in the opening scene at the Admiral Benbow Inn. The innkeeper’s son Jim Hawkins (Jimmy Bain) is a perfect youthful hero: intelligent, watchful, fearless. He also has a wonderful Broadway voice as we hear in the duet “Sail” with his mother, Mary (Victoria Huston-Elem), the only female in the cast. An even stronger duet comes at the end with Long John, “Never Seen Good.”

The cryptic, nearly cadaverous Billy Bones (Patrick Oliver Jones) tells what we need to know about Captain Flint’s ill-gotten treasure. One of the delights of the production is the can’t-believe-your-eyes double casting when tall, thin actor Jones shows up a few moments later as the regal, saturnine Captain Smollett.

Music director Jeff Theiss leads a pit ensemble of eight in the performing of 20 original numbers composed and with lyrics by Corinne Aquilina. As Aquilina and Smock are longtime colleagues we can be sure the score fulfills the playwrights’ intentions, a trenchant critique of greed, with many songs forthright and declamatory. In several numbers director Smock has cast members standing starkly, like the Parisian poor contemplating storming the barricades. The most moving song is the lamenting second-act trio, “Ashes to Ashes,” led by tenor Abraham Gray (Leland Burnett), along with Captain Smollett and Doctor Livesay (Clark Scott Carmichael).

The principal comic relief and major scene-stealer is Ben Gunn (Patrick Richwood), the crazed, feral-looking sailor abandoned on the island by an earlier ship. He cannot show up until the second act because Richwood is earlier double-cast as the mutineer O’Brien. Inevitably, Richwood’s Gunn inherits some elements from Caliban in Shakespeare’s The Tempest, also set on an island.

Merry-Go-Round’s performance of Treasure Island is not a world premiere. That took place in 2013 at the Arkansas Repertory Theatre in Little Rock, where the artistic director was Robert M. Hupp, whose tenure at Syracuse Stage begins this fall.

Offerman & Mullally: No Apostrophes, No Apologies
Getting the Acts
To Top