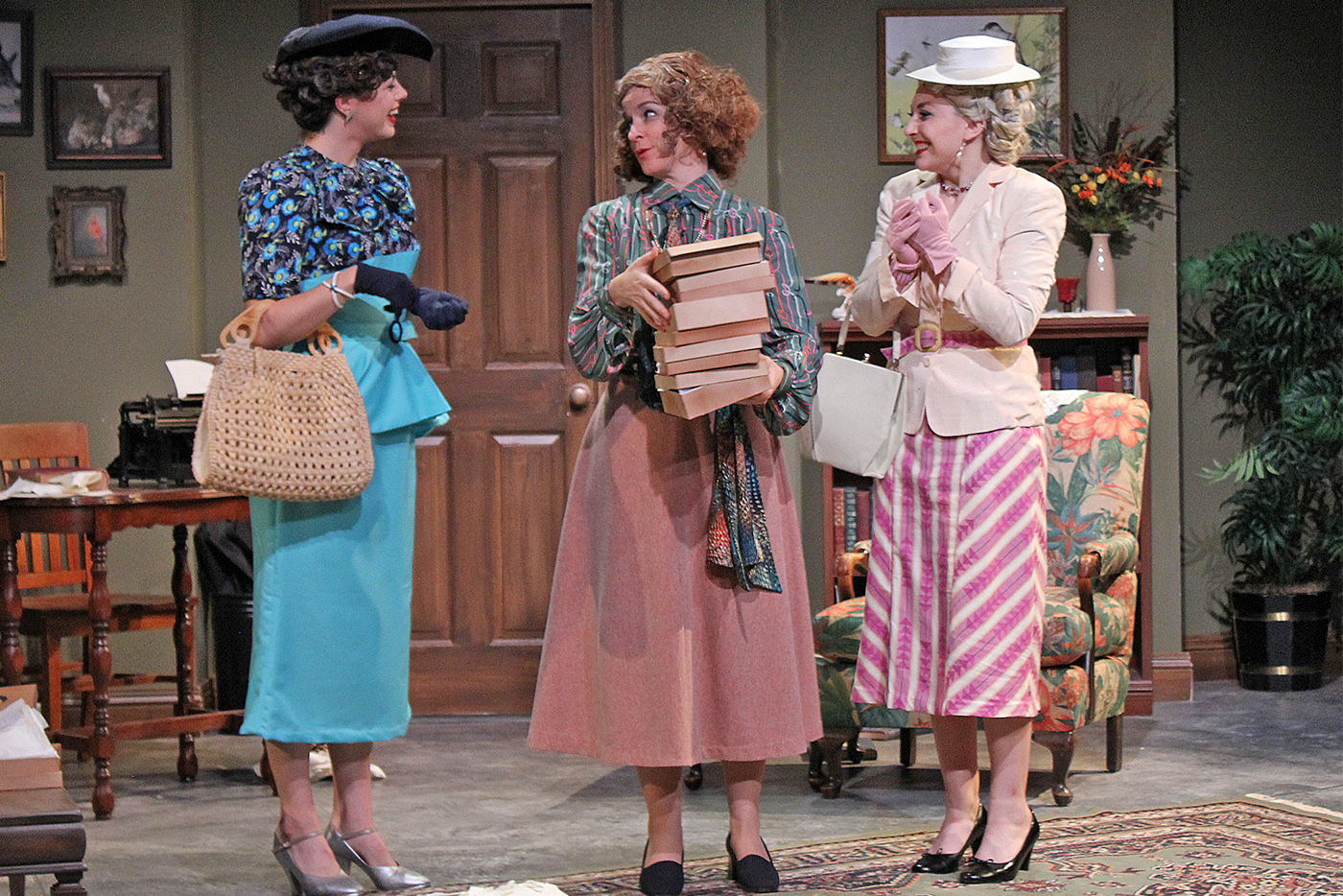 Cortland Rep’s production of “Cards on the Table” is pruned but not betrayed.

Depression-era London was not a peak episode in the history of fashion or style. Yet in the current Cortland Repertory Theatre production of Cards on the Table (through Saturday, Aug. 13), it becomes the occasion for extravagant display.

The little-known Cards is Leslie Darbon’s unfaithful adaptation of the 1936 Agatha Christie novel. Because of its origin on the page, the play’s action spreads cinematically over a sequence of sets that roll in silently on two turntables. The company has never before displayed such frou-frou or furniture. With Shelley Barish’s scenic design, David A. Sexton’s lighting and Wendi R. Zea’s costumes, Cards on the Table is the greatest treat for the eyes the company has ever shown us.

Serious Christie buffs will remember that the featured detective in the 1936 novel was Hercule Poirot, and that David Suchet played him in a 2005 British television adaptation. He’s gone, as are many of the unwieldy cast of surplus characters. Adapter Leslie Darbon, who also fashioned A Murder is Announced from a Christie work, was following the author’s wishes. The original is pruned but not betrayed.

Mr. Shaitana (Mark Re), a rich, exotic foreigner wearing a fez and a caftan, has invited five guests for the evening. We never know where he’s from, but “Shaitana” means “evil one” or “devil” in Hindi, and the place is decorated with Africana.

The guests’ identities could not be clearer as if they had arrived with name tags. The most striking is redhaired Ariadne Oliver (Wendy Bagger), a crime novelist. Shaitana confides in her that the other four guests are part of a special collection: Each has committed murder in the past, innocent though they may appear now.

A somewhat testy medico, Dr. Roberts (Richard Daniel), speaks up first. Following him is an elegant grande dame of a certain age, leaning on her cane, Mrs. Lorrimer (Mary P. Williams). The best-dressed member of the cast comes next, tall Anne Meredith (Caroline Kane), whom we catch in, ahem, inoperative statements. Lastly is the dark-browed, handsome but reticent Major Despard (Daniel Wisniewski), who would rather turn away than shake an unwelcome hand. These four are to play bridge, supplying a continuing metaphor for unfolding action, as well as explaining the title of the play.

The necessary first murder comes fairly quickly, calling in the law: imposing Superintendent Battle (Arthur Lazalde) and attentive Sergeant O’Connor (Jason Shipman). Up until this point it may feel we are in generic Christie-land, but Cards on the Table steps into somewhat different directions. Perhaps most surprisingly, the crime novelist Mrs. Oliver does not possess any special gifts of observation or deduction. She is not an anticipation of Miss Marple. She recognizes the name of Superintendent Battle, and he knows her, but more often she is a sounding board or ally for him rather than a second-guesser.

Superintendent Battle feels like a wholly new creation, perhaps because Darbon fashioned him out of four detectives in the novel, only one of whom was Poirot. As Lazalde portrays him, he cannot enter a scene without dominating: a tall, broad-shouldered baritone with a shaved head. There are some humanizing wrinkles, such as his insistence that his title be recognized, in speaking to Dr. Roberts, perhaps an echo of Poirot’s reminder that he is Belgian not French.

Battle also comes with a touch of self-mockery, remembering that sheer women’s stockings might cost more than a superintendent’s salary. But there’s no Lastrade-like thickness as there is so often with English lawmen in murder mysteries. He is more an heir to Sherlock, although methodical rather than lightning-quick.

If there is a weakness in Darbon’s adaptation that prevents Cards on the Table from being presented more often, it is that there is more exposition, containing shoals of red herrings about the four bridge players, than is usual in dramas Christie wrote herself for the stage. Director Kerby Thompson clearly recognizes this going in and livens things up with body language. Lazalde’s Battle and Bagger’s Mrs. Oliver are so animated in their dialogues that if the sound were cut off we could follow most of what they are saying from gestures, like actors in a silent movie.

All four card-players are wonderfully physical, each in his or her own distinctive way so that it is impossible to rank them. Company favorite Mary P. Williams (Six Dance Lessons in Six Weeks) as Mrs. Lorrimer may start with advantages. As beautiful women are often shifty in Christie dramas, Carol Kane’s Miss Meredith can electrify with ambiguity. The two male card-players, Daniel Wisniewski and Richard Daniel, took important roles in last summer’s 1776, and dominate their scenes here.

Cards on the Table might be nearly forgotten Christie, but it’s first-rate summer theater at Cortland Repertory. For elegance, wit and panache, this is the kind of production people hope to see at Niagara-on-the-Lake’s Shaw Festival.