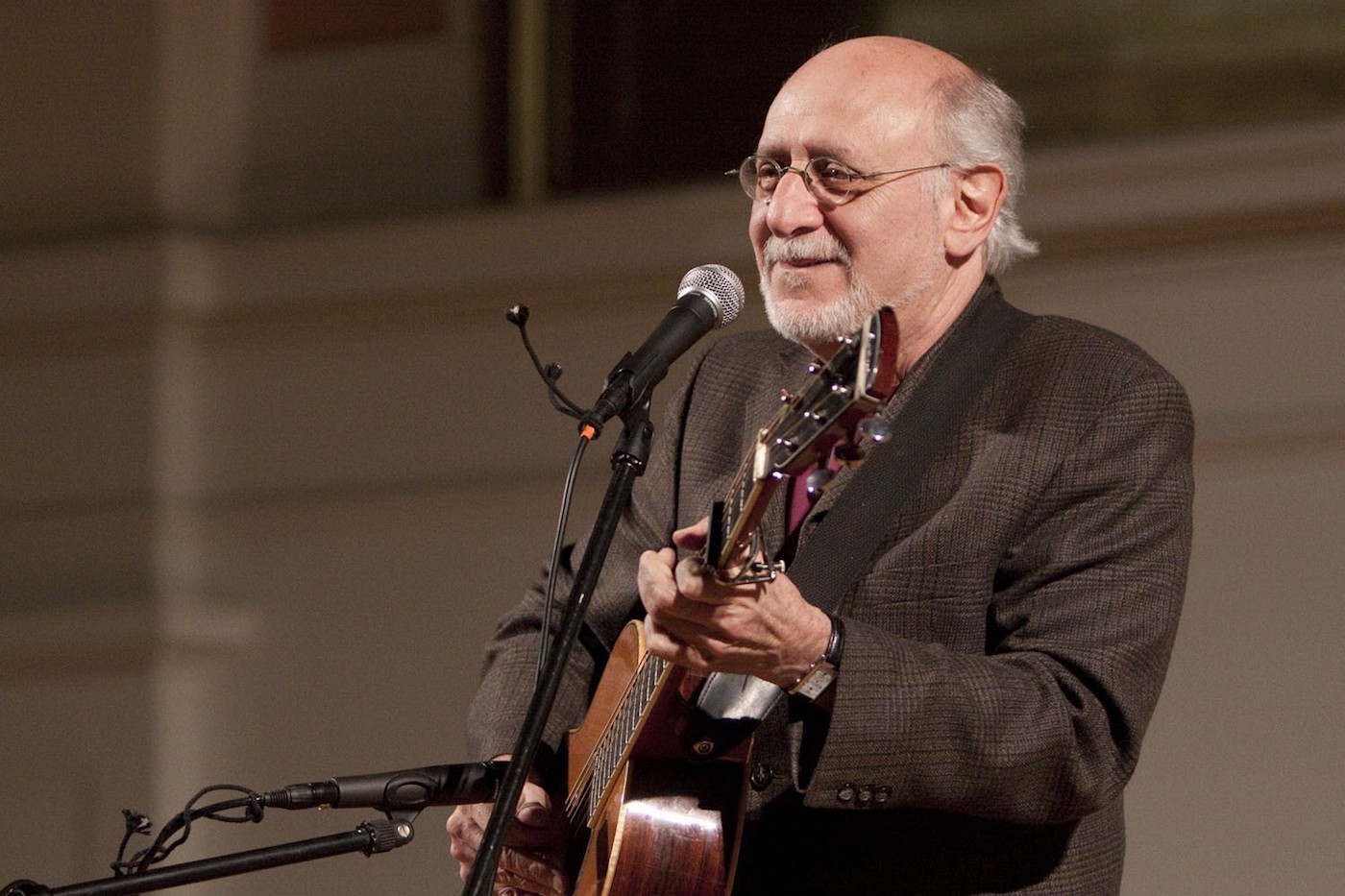 Even in his late-70s, Peter Yarrow’s vitality for folk is as strong as ever.

Peter Yarrow, part of the famed Peter, Paul and Mary folk act that hit the music scene in the early 1960s, will be strumming and spinning yarns at the Earlville Opera House, 18 E. Main St., Earlville, on Saturday, Aug. 12, 8 p.m. Tickets are $40 for general admission and $20 for students with a valid ID and ages 17 and under. For information, call (315) 691-3550 or visit earlvilleoperahouse.com.

Following suit with many folkies, the trio’s repertoire consisted of covers and originals. In 1962, their first album featured the singles “Lemon Tree” (written by Will Holt) and “If I Had a Hammer” (written by Pete Seeger). Their third hit single, which can be found on their 1963 album Moving, is the forever popular “Puff the Magic Dragon.”

Yarrow, a Cornell University alum, and Paul Stookey continue in the music world even after the 2009 death of Mary Travers following complications with a bone marrow transplant during her leukemia battle. In 2014, director-producer Jim Brown released 50 Years with Peter, Paul and Mary as a television documentary.

During a phone conversation, Yarrow discussed his philanthropy. “I’m working on something that combines music with social and political visions,” he said about the bipartisan Better Angels, which takes its name from a line in Abraham Lincoln’s Inaugural Address: “when again touched, as surely they will be, by the better angels of our nature.”

“I can see people being irate in terms of the policies,” said Yarrow. “If we are divided so severely, we’re setting ourselves up for something similar to Nazi Germany, where they were so busy fighting each other around the issues.”

During the interview, the 79-year-old songwriter was walking the streets of New York City on his way to meet a publisher. He paused to politely dismiss a passerby looking for a photo and autograph opportunity. Even after 50-plus years in the business, he’s still willing to stop for adoring fans.

“It’s a compliment to me, but it’s a little crazy,” Yarrow noted. “It says that my music is a part of their life, music that’s in the conscience of America for so many years. It’s also saying we need to get back to those values. A small gesture like that from somebody, even if I can’t stop, is wonderful.”

What’s it like being an active musician in your late 70s?

My concerts aren’t trips down memory lane; the songs are relevant, important and galvanizing. I can’t remember it being as busy or having a greater opportunity to really do something. It’s therapeutic. I think with many people, they don’t feel they’re needed anymore. But, my God, I’m needed.

I just came back from the Winnipeg Folk Festival. When I sang “Where Have All the Flowers Gone?” (by Pete Seeger), people were saying we need to be singing together, to affirm one another. When I come to your neck of the woods, you’re going to get this from me. I hope you all feel the same.

There has been and will be political and social turmoil. Do you have any current fears?

My biggest fear is that the division in our country will allow fascistic ways to take over. We deal with realities on a political level, but on a personal level, we have to reach out to each other.

The real issues are not just political. We live in a culture suffused with greed and a celebration of feeling dysfunctional, whether it’s with the Kardashians or Donald Trump. We’re dealing with a selfish culture that allows bullying to be a proper sport on television.

The heart of America has been damaged. We need to restore it. I’ve been doing that for over 20 years with Operation Respect, an anti-bullying program that goes into schools. The programming creates an environment in which kids value themselves intrinsically rather than measuring meaning in life with material things. The rewards of being a human being are giving and serving and caring about each other.

Another fear I have is the widening division between the haves and the have-nots. When people don’t have hope or feel there is an equal playing field, they can be wooed by extremism.

Well, yes. It changed dramatically in the 1960s. It’s evolved. Folk music stresses the importance of living life authentically, stresses a more caring society and there are love songs. It’s written with sincerity and not for the dollars.

The music business is highly homogenized, where music is about style and technique, not about the heart. You won’t hear the next “Blowing in the Wind” or the next “If I Had a Hammer” in today’s market. If Bob Dylan started today, he wouldn’t do that well on American Idol.

Do you receive criticism for music you create?

I do, but not a lot. I come from a time when people were labeled communists. But everybody is labeling everybody else now. Even people who didn’t like our messages, they appreciated our music and sincerity.

We didn’t aim to be hit makers, but we performed many songs that were meaningful to us. We re-recorded “Blowin’ in the Wind” by Bob Dylan, “In the Early Morning Rain” by Gordon Lightfoot and “Leaving on a Jet Plane” by John Denver. These were extraordinary songwriters that presented something to the American public. When we recorded “Where Have All the Flowers Gone?,” we didn’t think of this as a cover, but we were just playing these songs.

Your 1967 song “I Dig Rock and Roll Music” at the time was a step away from your folk.

It was a huge hit. It’s funny. Mary and I were folkies through and through. Paul was originally a rock’n’roller. He had a band in high school called Birds of Paradise. He came to us without any folk background at all. Aside from rock, he had experience in classical and jazz.

There were novelty songs we’d do from time to time. We did a version of “Old Blue” (The Byrds) and then say, “What if this was to be changed and modified by an unscrupulous modifier of folk songs?” Then we did a rock’n’roll spoof on that.

Paul wrote a lot of unusual songs. “Parallel Universe” and “On a Desert Island (With You in My Dreams)” are wonderful counterpoints to the seriousness and dedication the bulk of our music was about.

Were there any bands in the 1960s that you really took note of?

The Beatles. We recognized their brilliance, but it wasn’t really what we were about. A lot of the musicians I listen to now are very unknown. I do have great admiration for the musicianship and heart of Lady Gaga, for instance.

Do you have any grandchildren? If so, are they aware of who their grandfather is?

Yes, I have a granddaughter. It’s funny. I’m just her grandpa. My daughter is also a singer, a great one, and an activist. So my granddaughter gets to take part in all of this. She was 4 years old when she went to Occupy (Wall Street).

What can people expect at your Earlville show?

I’ll be singing the Peter, Paul and Mary repertoire. I will sing “Puff the Magic Dragon” and call the kids on stage. I’ll encourage everyone to sing along to that or any song. I may have to redefine the word children, because the demographic may be skewed. So I’ll say everyone 50 and under can come up on stage.

At intermission, I’ll have people write down requests. In the second half, the only songs I’ll sing are the requests. The audience has a part in deciding what is shared.