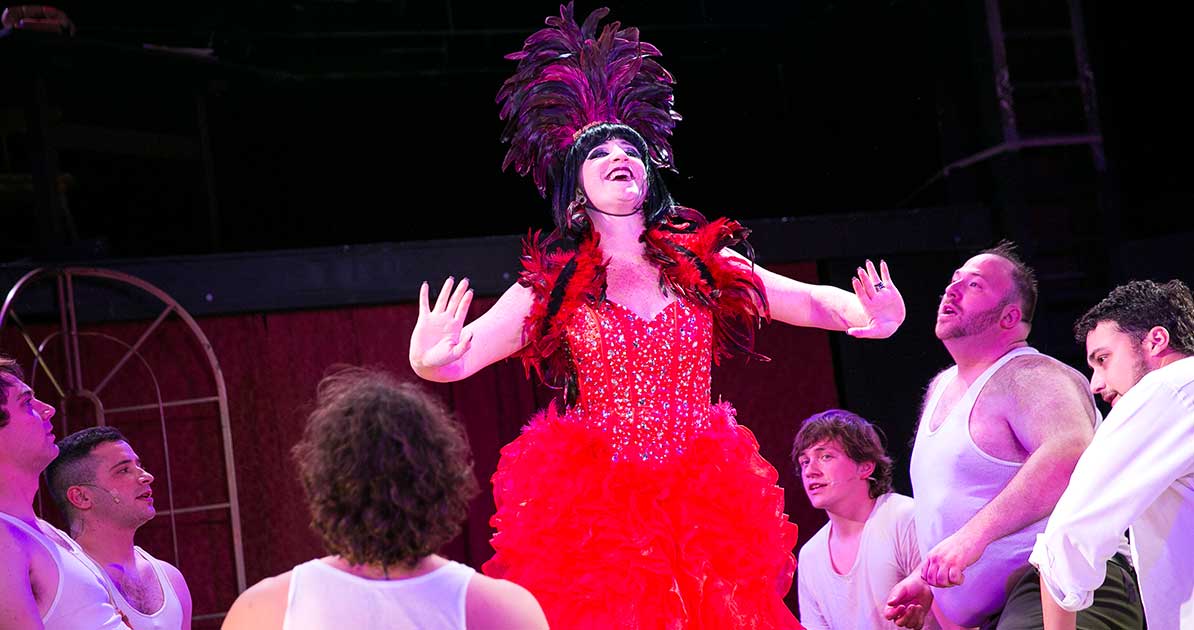 With SU Drama staging its unusual take on Into the Woods, another unconventional show running through Oct. 27 on the Central New York Playhouse stage is John Kander and Fred Ebb’s Kiss of the Spider Woman. The show, which features a book by Terence McNally, won a Tony Award for Best Musical in 1993 and ran for 904 performances. Somehow, though, it is making its debut on local boards only 25 years later. Whatever the reluctance to stage, it has nothing to do with the score, which contains several compelling discoveries.

This Spider Woman should not be confused with the non-musical play of the same title that Argentine writer Manuel Puig based from his 1976 novel, a work composed only of dialogue. The now-defunct Simply New Company performed the non-musical version with Tom Quinn and Jordan Glaski in April 2007, causing much comment. These three should be kept separate from director Hector Babenco’s 1985 movie of the same title that won William Hurt his only Academy Award. All four differ in conception and plot details, which shall not detain us here.

Part of what makes Kiss a hard sell is that it’s a brutal prison story, even while being a dance show. Choreographer Shannon Tompkins has assembled the beefiest, heaviest male chorus seen anywhere in recent years. These comprise the guards and other prisoners, who regularly treat each other roughly. One of the prop demands met by producer Leila Dean is an ample supply of stage blood. 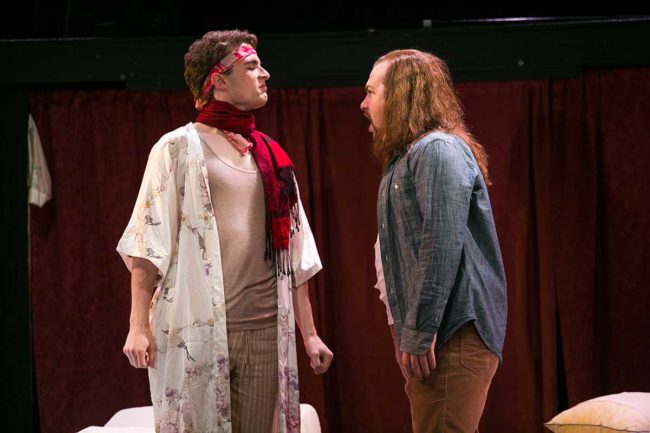 Under the scowling gaze of the barking Warden (Eric Feldstein), Marxist revolutionary Valentin (Liam Fitzpatrick) of peasant background finds himself thrust into a prison with the effete Luis Molina (Nic MacLane), a window dresser. Molina knows the ropes from time served, but he has eight years to go. His crime was “corrupting a minor,” i.e. homosexual advance, which has no political dimension. Valentin despises Molina more for his political irrelevance than his gayness, but wants nothing to do with him in any case.

For three years Molina has coped with the ever-present threat of humiliation and torture by fantasizing about old movies, focusing on a period diva in black hair named Aurora (Erin Sills), who played many roles. One that fascinates him most, even as it fills him with dread, is the Spider Woman (Erin Sills), whose kiss brings death. Although clearly a creature of Molina’s imagination, she is treated differently across the four versions of the story. Here she is present in eye-filling costumes designed by director Abel Searor and handled specially by Donnie Williams.

When Molina learns that his aging Mother (Patricia Catchouny) is ailing, he asks that she be allowed to visit. The price for this favor is delivering the name of Valentin’s girlfriend, which is Marta (Taylor Peck). Their resultant quartet, “Dear One,” celebrating two quite different kinds of love, is so moving that it justifies Searor’s labor of love to get Kiss on a local stage at last.

Veteran singer Erin Sills has never been better, not even in Evita, and dominates the scene dramatically and musically, especially the second act’s title number. Liam Fitzpatrick, cast against type, is bearish and caustic. But it’s the lean, leading-man, handsome Nic MacLane, who breaks new ground as an epicene tragic fool. His cinema-inspired post-execution dance of death fulfills one of director Searor’s most inspired conceptions.