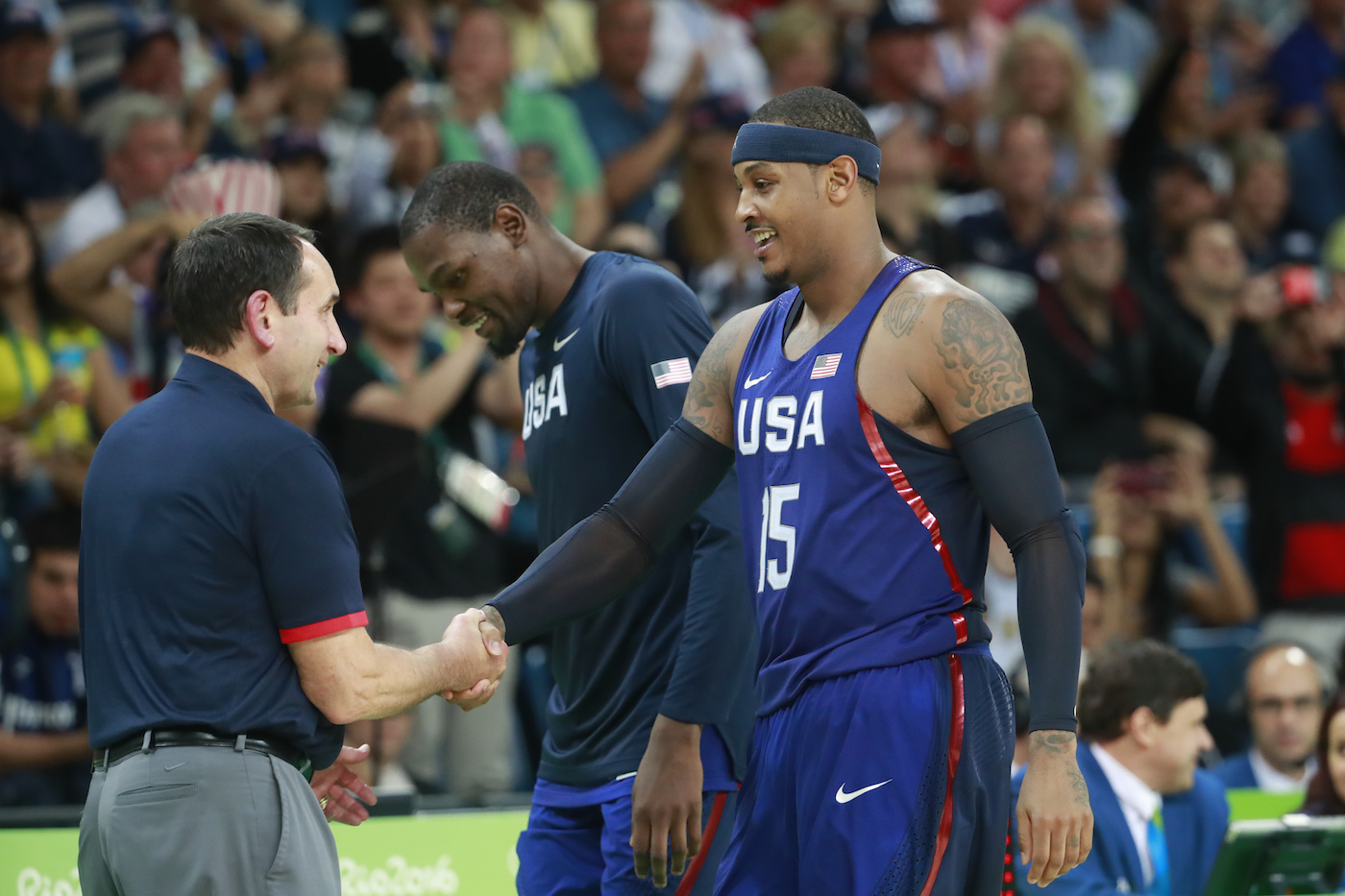 Carmelo Anthony shakes hands with coach Mike Krzyzewski as he leaves the court in the fourth quarter of the men’s basketball gold medal game against Serbia on Aug. 21, 2016. Photo by Doug Mills of The New York Times
Share
Tweet
Share
Share
Email
Comments

It wasn’t always easy, but the U.S. Olympic Men’s Basketball Team came to Rio De Janeiro with one goal in mind and left having accomplished it.

Though team captain Carmelo Anthony scored only 21 combined points in Team USA’s last three games — seven points in each game — he ended his Olympic career as the most decorated player the U.S. Olympic Men’s Basketball Team has ever seen, with three gold medals and one bronze to his name. Earlier in the games, Anthony became the all-time leading scorer in Team USA history, and with Sunday’s victory, he also passed David Robinson to become the all-time leader in rebounds with 125.

Anthony held back tears as he announced that 2016 would be his last Olympics after the U.S. defeated Serbia 96-66 on Sunday.

“I committed to this in ’04,” he said. “I’ve seen the worst and I’ve seen the best. And I stuck with it, we stuck with it. And I’m here today, three gold medals later. I’m excited for me, but also for the other guys that never experienced anything like this.

“I think I’ve given enough to Team USA Basketball,” he went on to say. “As much as I’m going to miss it, it’s time to pass it along to some of the guys who was on our team this year, but also to the younger guys coming along and give them an opportunity to be a part of something great. So, for me I’m hanging these (shoes) up, USA Basketball-wise. It’s been a fun journey for me. It’s been a great ride.”

Anthony averaged 12.1 points per game, but it was his commitment to the team as a whole and his leadership that stood out amongst all else.

Anthony also received some love on social media from ESPN and Bleacher Report for his accomplishments:

Thank you for everything, Melo #USA

"This is it for me." An emotional Carmelo Anthony bids farewell to the Olympics after winning his 3rd basketball gold medal, becoming the first man to do so. ???