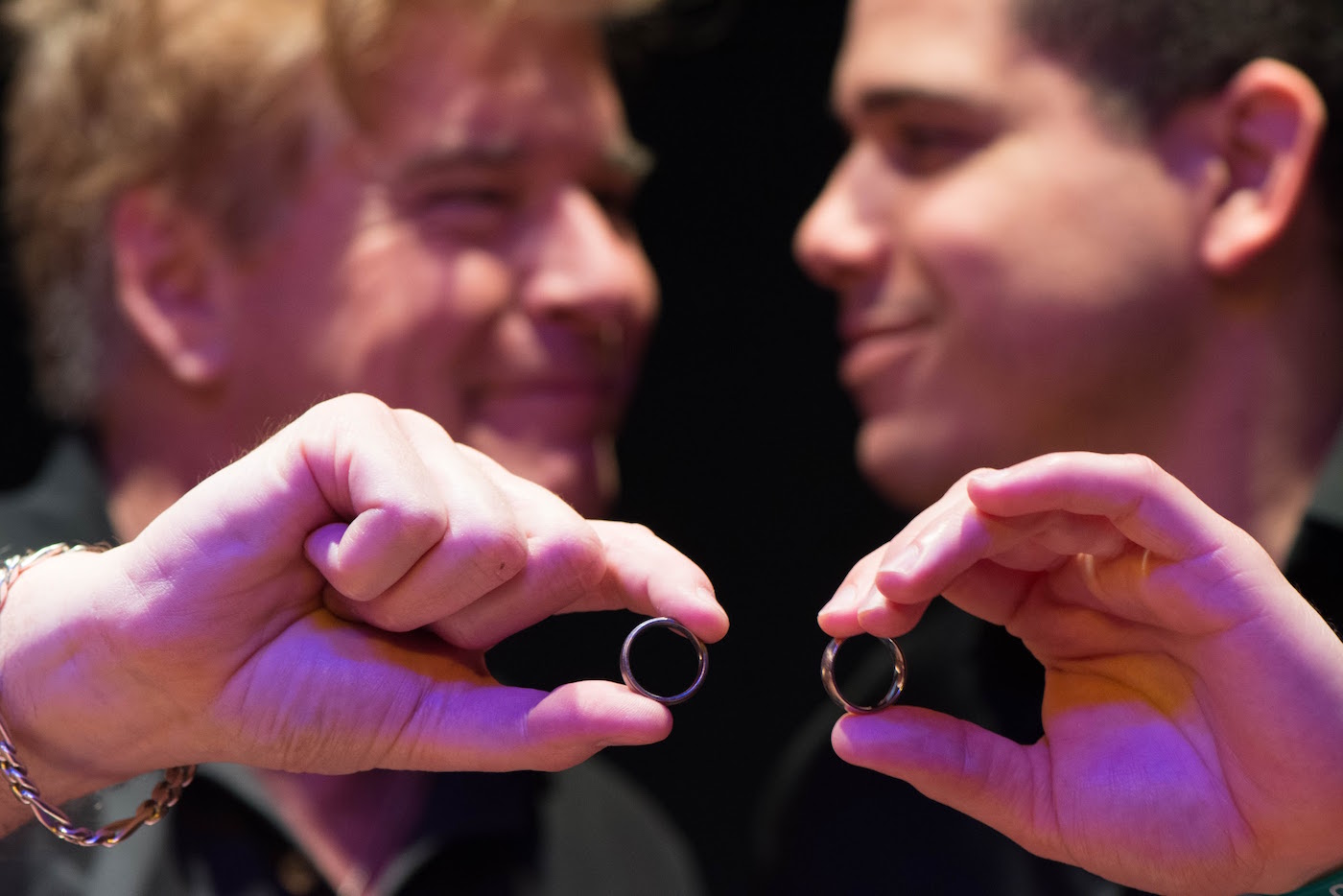 Nine one-act plays on the same subject make for a diverting banquet for Rarely Done Productions’ new show at Jazz Central. In Standing on Ceremony: The Gay Marriage Plays, there are some lean astringent vegetables, hearty robust proteins and two generous servings of dessert, which do not come at the end. Although the subject of LGBTQ rights has become a potent political force in recent years, as the governor of North Carolina is learning, Standing is mostly free of strident advocacy. Gay marriage, like straight marriage, is the springboard to many conversations. 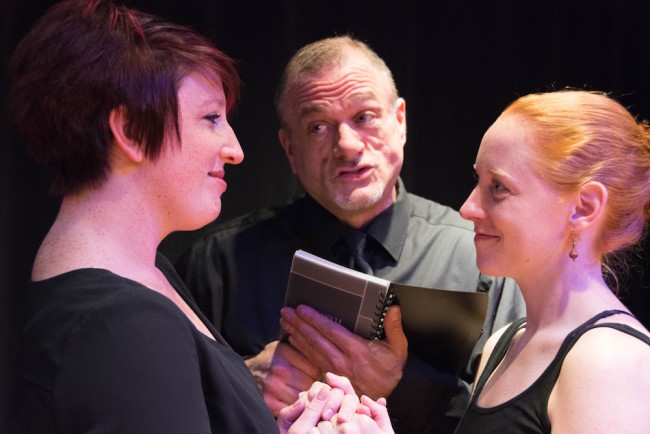 As Standing on Ceremony opened off-Broadway in November 2011, all the items in it predate the Supreme Court decision on Obergefell vs. Hodges (June 2015), decriminalizing gay marriage, so some elements require contextualizing. In Wendy MacLeod’s “The Flight Tonight,” two California residents (Erin Sills and Marguerite Mitchell) are contemplating transportation to Iowa during the brief period when the Corn Belt State allowed gay marriage and others did not. The Mitchell character, an Iowa native, bridles at cosmopolitan condescension toward that Midwest patch of enlightenment. Sills and Mitchell, both excellent here and distinctive stage presences, are almost unrecognizable a few minutes later in different one-acts.

Doug Wright (known for I Am My Own Wife) contributes the most experimental and disarming entry, “On Facebook.” A soft-spoken ironist (Michael Stephan) launches a discussion on the topic of Standing on Ceremony and then surveys the battling “Likes” and “Dislikes.” Although we have all experienced something like this — people with strongly held opinions, barely listening to what has been said, blasting away at faceless readers — Wright is pioneering new ground by dramatizing it.

The playwright claims only to have recorded what came in, but the voice of the foam-at-the-mouth troll who writes only in caps is conspicuously absent. Certainly authentic are the voices that line up with the playwright but embarrassing with rhetorical excess. Admittedly, the dogmatic homophobe (Erin Sills) gets the worst of it, but that’s also what has happened in the national dialogue.

Longtime comic actor David Minikhiem has never looked better than in the darkly dramatic “London Mosquitoes,” by Moises Kaufman, playwright of The Laramie Project. Using extraordinary metaphors, a scientist speaks of the wrenching pain from the end of his profound relationship.

Paul Rudnick, the most reliable of contemporary gay comic playwrights (Jeffrey), contributes two welcome items. In “Gay Agenda,” a smiling matron (Michaela Oney) begins by telling us about the family-centered organizations, all with benign-sounding names, like “Cheerleaders for the Family,” that she supports. Astutely aware that some see these groups as fostering discrimination, she assures us that she really does love gay people, citing a list of hairdressers and decorators. Her tone begins to shift when she acknowledges that society at large is more tolerant of gays and, thus, the “Gay Agenda.” Almost whining, she pleads, “Why does the main character in a sitcom have to have a gay sidekick?” Then she kicks into a frenzy, fearing that her husband (shown in a slide show to be a perfect Rotarian) might be seduced by gay sex.

The second, “My Husband,” is a dialogue poking fun at the domineering Jewish mother, one of the most familiar comic stock figures of the last half-century. The son (a cringing Jimmy Curtin) is an unmarried high school teacher, and his loud mother (Michaela Oney, in a deft change of accent) thinks it’s time for him to hitch up. She’s even taken to writing entries for him on gay dating sites. The simple device of having her accept his gayness may not sound like much, but it delivers many riches, making “My Husband” the audience favorite.